This ring looks like a slightly smaller version in silver of the giant extra-terrestrial mothership from the classic Steven Spielberg movie, “Close Encounters of The Third Kind”. This astounding piece came from the fertile imagination and incredibly-talented hands of the extraordinary, French-Moroccan jeweler, Evelyn (Eveli) Sabatie (b.1940). Eveli’s career was launched with her several years long apprenticeship to and very close collaboration with the renowned Hopi jewelry artist, Charles Loloma from 1968 to 1972.

From Loloma, Eveli learned the basics of jewelry fabrication and incorporated her own inspired sense of design, colors and materials from her childhood and young adulthood spent making art amidst the sophisticated designs and elaborately inlaid, extravagantly colored tiles, complex ivory and wood carvings of her native Morocco into her jewelry. Because initially money was tight, Eveli began making her jewelry by incorporating  simple, inexpensive materials such as bleached beef bones, various woods and semi-precious stones into her pieces. In this way, the student taught the teacher, as well as vice versa, since Loloma was clearly influenced by many of Eveli’s innovative ideas, designs and materials and several developments which Charles is generally credited with creating, such as peek-a-boo and elaborate, multiple interior and exterior mosaic-style inlays might very possibly have originated with or been inspired by Eveli. In any case, one can easily see their considerable influence on each other and how Loloma incorporated some of Eveli’s ideas into his own jewelry creations and vice versa.

The complexity of this amazing ring is mind-boggling. It is composed of several stacked layers of silver with a row of applied-silver “raindrops” around the mid-section and it is very elaborately inlaid with several types of stones. First, are the two large turquoise inlays which form the face of the ring. They are beautifully-colored and distinctively matrixed high-grade blue stones from one of the exclusive “hat” mines in Nevada, probably the “Blue Diamond” or “Stormy Mountain”. These gorgeous stones are flush set into an extremely complex heavy serrated silver bezel. Next, is a narrow, intricately-tapered inlay panel composed of perfectly-cut small pieces of blue Lapis Lazuli and black jet stones which runs horizontally all the way around the ring’s perimeter. This band of inlay is slightly wider at the top of the ring which is a subtle and beautiful touch. Finally, there are ten silvery-grey moonstones of various shapes and sizes set into plain silver bezels around the body of the ring.

The ring measures a size 7 on a professional graduated ring sizer. The ring’s face measures 2 inches in length and 1 1/4 inches in width and it rises approximately 3/4” above the finger. The ring weighs a very substantial 55 grams or 1 7/8 ounces.  It is in excellent condition, but Eveli informs us that the diagonal silver bar across the face of the ring is not original to the piece. She believes it is a very well done repair to a probable crack in the turquoise stone which might possibly have been executed by another former Loloma associate in Phoenix who does jewelry repair. The ring is properly signed “Eveli” in the artist’s characteristic signature on the interior.

We have been buying and selling Eveli Sabatie’s jewelry for over 30 years and we can say that this ring is one of the most impressively-sized, imaginatively-designed and beautifully-crafted pieces of hers that we have ever seen; a unique three-dimensional sculpture in silver and stone as much as it is a piece of jewelry.

Be the instant envy of the entire jewelry galaxy with this totally out-of-this-world Eveli Sabatie ring! 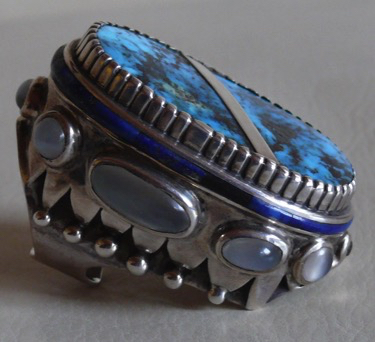 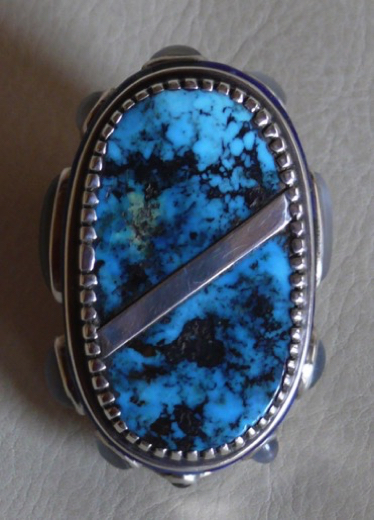 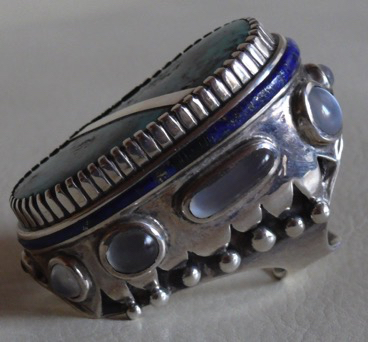 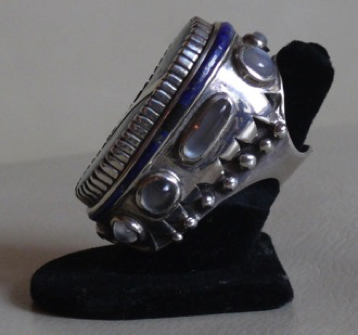 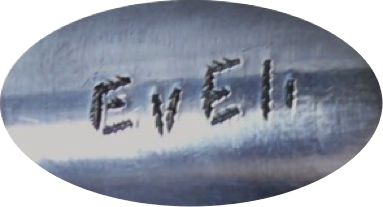 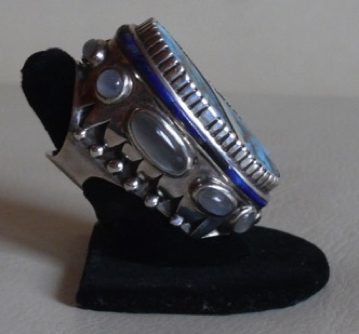 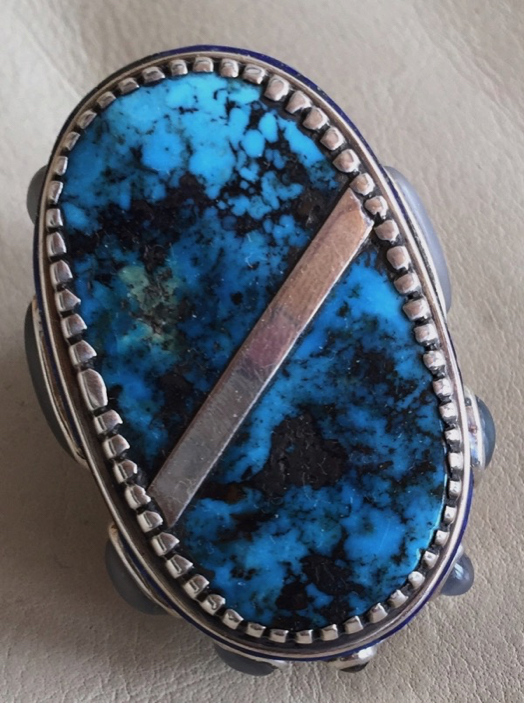 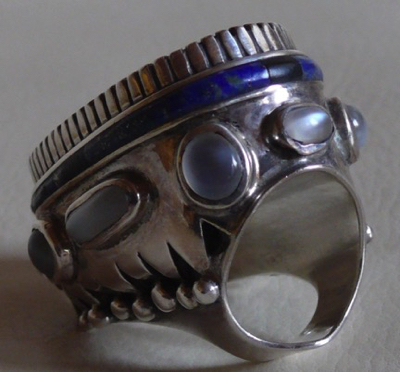 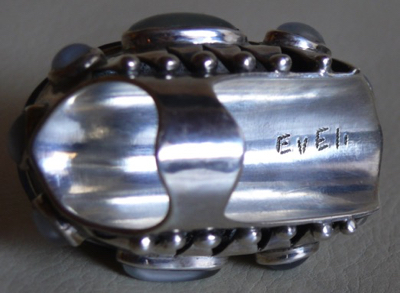 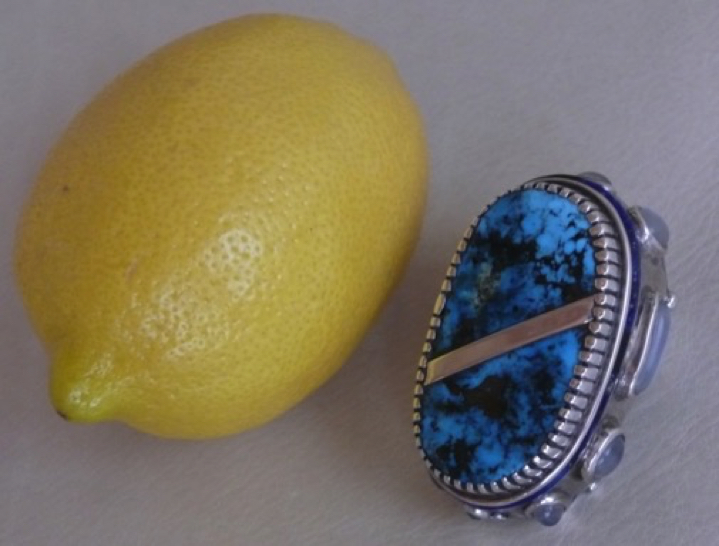 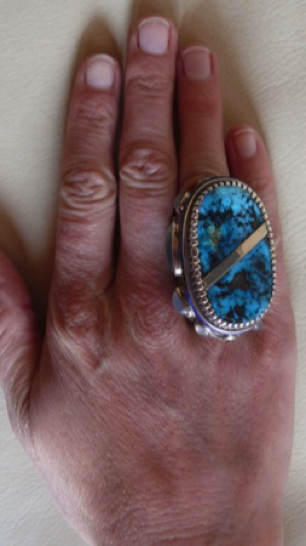 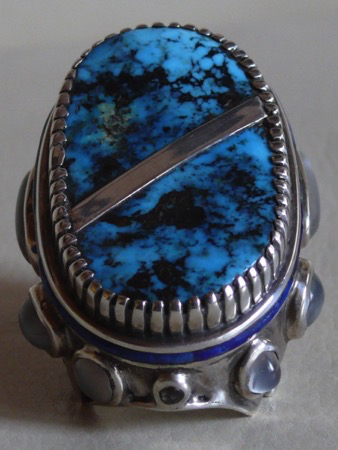 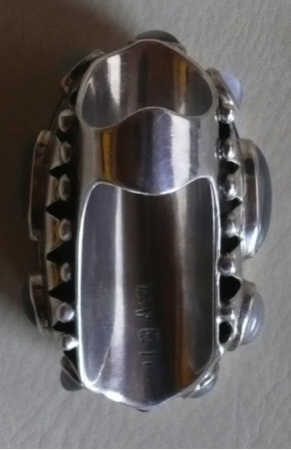 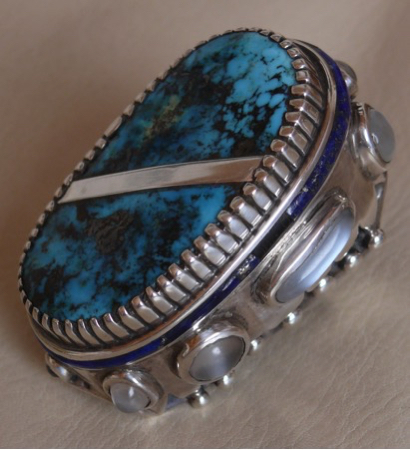