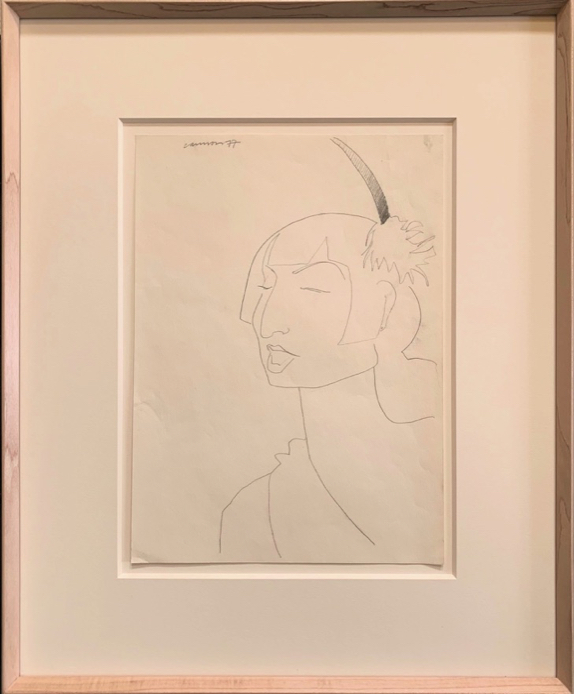 A beautiful, original graphite-on-paper portrait of a

This wonderful pencil drawing is possibly a preliminary sketch for one of Tommy Wayne (Tee Cee) Cannon’s (1946-1978) paintings that never came to fruition or perhaps it’s just a stand alone drawing for its own sake. And, although it might seem deceptively simply rendered, this is an extremely accomplished and sophisticated piece and it provides an intimate and lovely window into the great depth of Tee Cee Cannon’s prodigious talent which was unfortunately cut far too short by his tragic and untimely accidental death in 1978 just one year after this portrait was completed.

The line work in this piece is utterly confident and daringly bold, the design completely fresh and captivating. The woman’s face is full of life and joy, she is wearing a traditional Pueblo woman’s hairstyle with a decorative Macaw feather and feather ruff in her hair and she appears to be singing boldly as if participating in a ceremonial dance. Her over the shoulder traditional Manta-style dress would also seem to affirm this. To be able to convey this level and intensity of human and cultural expression, pleasure, devotion and beauty so economically with such a few pencil strokes is nothing short of brilliant, in our view. 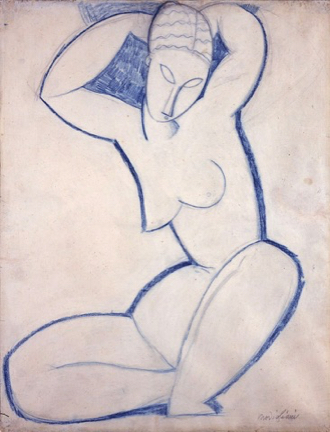 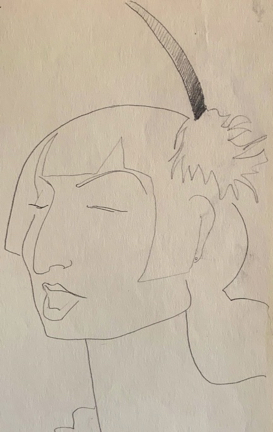 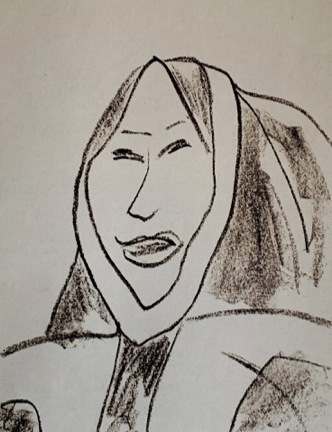 It was ground-breaking Modernist-style artworks such as this one by Cannon and his fellow Native American artist colleague and former teacher, Fritz W. Scholder (1937-2005), that stood both the American Indian Art world and the American Modern Art world on their respective ears in their seminal 1972 “Two American Painters” exhibition at The Smithsonian Institution in Washington, D.C. and they continue to exert a very powerful influence in the Modern and Native Art worlds today.

This is not the flattened, simpler Folk Art type perspective of Native American paintings on hide and paper done in the “Ledger” style of the late 19th and early 20th Century nor of the so-called “Dorothy Dunn School” of “Indian” or “Flat-style” non-perspective painting which was taught broadly by Dunn and her successors to young Native American art students at The Studio School in Santa Fe from 1932 through 1962. This drawing is a horse of a completely different color and infinitely more sophisticated nature; classic, elegant, clean-lined, world-class, International-level Modernism a la Henri Matisse, Amedeo Modigliani, Diego Rivera or Georgia O’Keeffe. If any of these artists, each of whom made some of the 19th and 20th century’s finest and most eloquent graphite, ink and charcoal drawings, had ever personally seen this Cannon portrait it would surely have captivated them.

“T.C. Cannon embodied traditional Native American culture combined with the best influences of Western civilization. He was a modern Indian living in a modern world, influenced by both cultures, and he used those influences to comment on the past and our present world.”

The drawing is done in graphite pencil on plain off-white sketchbook paper and it measures 11 1/4” by 8 1/2” (sight). The framed dimensions are 18” by 15 1/2”. The drawing has been very beautifully and fully archivally matted and framed in a custom-made, hand-carved, natural maple wood frame under UV-light protective “TruVue” conservation “Museum” glass by Goldleaf Framemakers of Santa Fe, Santa Fe’s premier fine art framers.

The drawing has an immaculate provenance; it was acquired directly from T.C. Cannon’s sister and official estate executor, Joyce Cannon Yi. It is properly signed and dated “Cannon “77” at upper left and is in excellent original condition with a few slight wrinkles and some small smudges to the paper. This is a rare opportunity to own a beautiful, significant piece of American modern and Native American Art history and a world-class work on paper. 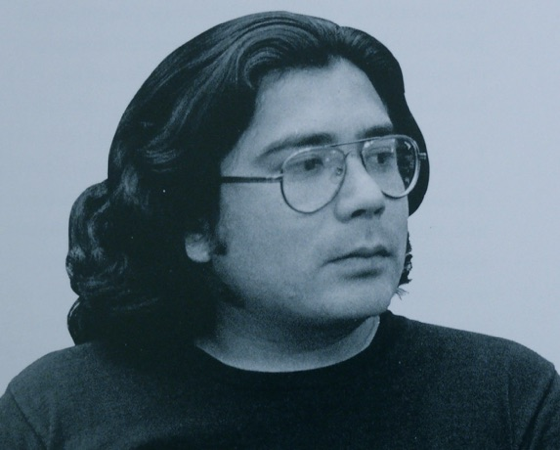