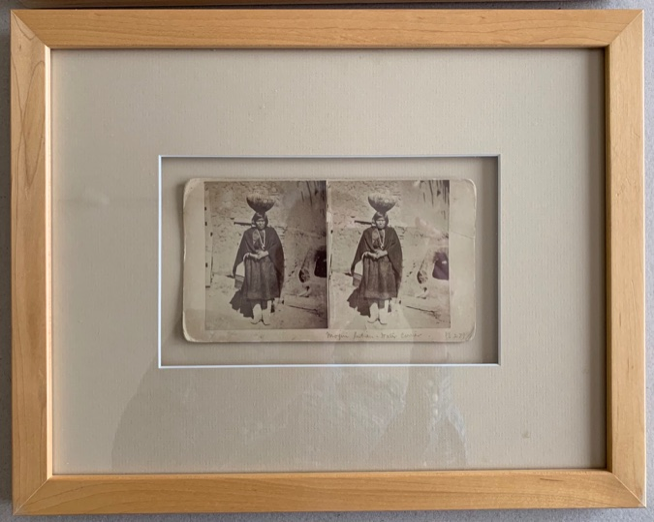 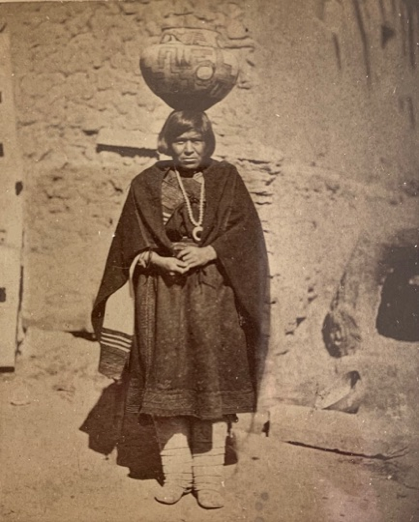 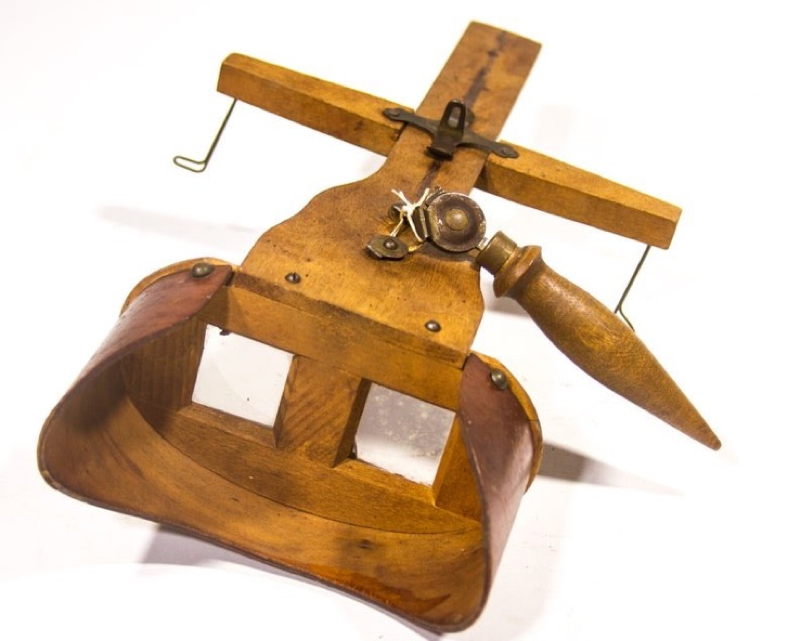 This wonderful pair of historic images depicts a Zuni Pueblo or possibly a Hopi woman carrying a very large and elaborate pottery jar on her head. This jar is a marvelous example of a mid-to-late 19th Century Zuni Pueblo “Kiapkwa Polychrome” type jar, one of the finest of all historic Pueblo pottery types in existence. Too bad we don’t have this jar as well.

Interestingly, the stereoscope card bears the handwritten caption “Moqui Indian-Water carrier No. 279” at the lower right under the photos. “Moqui” is a Spanish slang word which was used historically to refer specifically to the Hopi Indians, but this caption may or may not be completely accurate. The pottery jar is definitively of Zuni origin, so presumptively the woman carrying it is also a Zuni and presumably the photos were taken at Zuni Pueblo. In addition to the extraordinary Zuni pottery jar, the woman is also wearing an equally extraordinary elaborately embroidered wool Zuni “Manta” or shoulder blanket. However, since there was considerable trade and cultural exchange between the Zuni and the Hopi during this mid-to-late 19th Century time period, the woman carrying this Zuni jar could possibly be Hopi and the photos could possibly have been taken in one of the various Hopi villages.

To make the finished Stereoscope photo card ready for viewing, the original photographic prints were mounted onto a cardboard backing of a standard size to be able to fit into the stereoscope. The stereoscope photo card itself measures 7” in width and is 4” in height and the framed dimensions of the entire finished artwork are 14 3/4” width and 11 5/8” height. The beautiful and completely archival matting and framing of the piece are well worth a full description as it is so beautifully and precisely done. The photo card is matted with an “island” style cut-out overlay matte which accentuates it extremely well. Then the entire matted piece is framed in a beautifully-grained natural light maple wood frame, the molding of which is 7/8” in width. Finally, and very importantly the photo card is framed under UV-light protective “TruVue” museum conservation glass.

This piece is a wonderful, fascinating and significant object of Southwestern Native American, photographic and ethnographic history. To slightly paraphrase a very famous line from Steven Spielberg’s iconic 1981 film RAIDERS OF THE LOST ARK:

“Most of us are merely passing through history, this is history.”

“The stereoscope was introduced in the early 19th century. Stereoscopes use two nearly-identical images, each taken a few inches to the side of the other. When viewed through two lenses set 2.5 inches apart, approximately the space between the eyes, the result is the illusion of a three-dimensional picture. In fact, stereoscopes are seen as the precursors to 3D entertainment. Much of the three-dimensional technology of today is based on the simple principles that allow the stereoscope to function. Sir David Brewster often gets the credit for inventing stereoscopes, but he first designed the box-shaped viewer.

The first stereoscope was actually introduced in 1833 by Sir Charles Wheatstone in Great Britain. At that time, photographs did not exist, so drawings were used instead. By the 1850s, photography was possible so stereoscopes began featuring this new technology. Because the stereoscope preceded the publication of photographs in newspapers and magazines, stereo viewers were seen as forms of entertainment. People would pass around the stereoscope and see all sorts of beautiful scenes that they otherwise might never have been introduced to.”