This extraordinary pictorial pottery tile depicts a deeply tragic but ultimately triumphant story, one of the most disgraceful incidents in the long and violent history of the United States Government versus the First Americans.

The 400-mile Long Walk of the Navajo, from1864-66, which is known as “Hweeldi” in the Navajo language is a terrible and indelible stain upon American history in the same way as The Sand Creek Massacre (1864), The Trail of Tears (1830-1850), The Battle of the Washita River (1868) and the Battle of Wounded Knee (1890), yet the Navajo people survived the years long torment of the long walk and their subsequent cruel and barbaric imprisonment in the U.S. Army’s concentration camp at Bosque Redondo and ultimately emerged stronger and more resilient thanks in large part to the intelligence, skill and guidance of their conscientious and inspired leaders Barboncito and Manuelito. 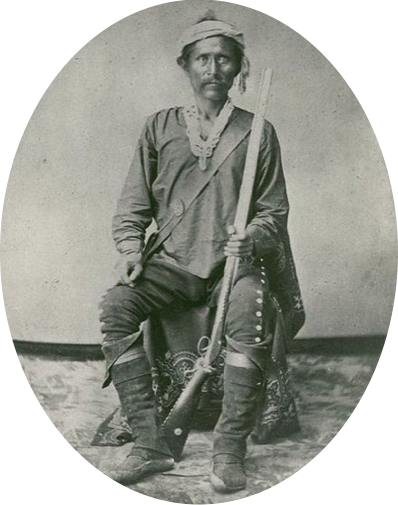 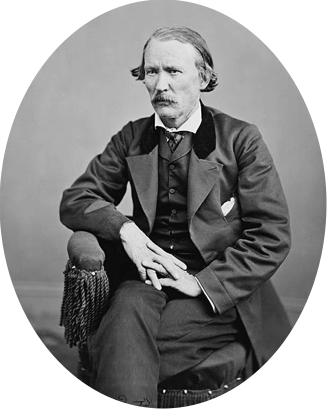 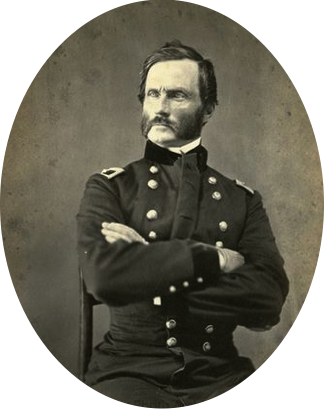 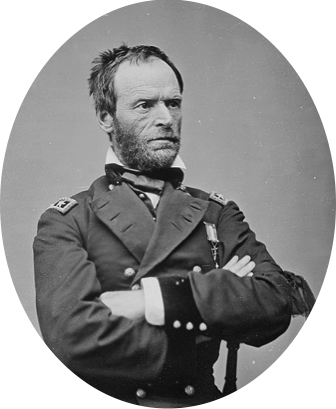 The perpetrators: Top row from left, Colonel Christopher “Kit” Carson (1809-1868) whose cruel scorched earth military campaign rounded up and captured many of the Navajo people and sent them on the forced march now known as “The Long Walk” under orders from General James Henry Carleton (1814-1873) at center. At right, Commanding General of The United States Army, William Tecumseh Sherman (1820-1891). The heroes: Below, two Navajo Chiefs who skillfully and successfully negotiated the return of their homeland at The 1868 Treaty of Bosque Redondo. At left, Barboncito (1820-1871), at right, Manuelito (1818-1893).

“The collective trauma of the Long Walk is critical to contemporary Navajos' sense of identity as a people.”

"Severity would be the most humane course.”

from their homeland to the concentration camp at Bosque Redondo

Self-taught Navajo pottery artist Elizabeth Manygoats (b.1973), daughter of the prominent Navajo potter, Betty Manygoats (b. 1945), has tackled this extremely difficult subject here with grace and dignity portraying the suffering and stoicism of the Navajo people under the awful, torturous conditions of the long walks; hundreds of miles of forced marching braving all manner of difficult harsh elements; little food, no medical care, the threat of constant violence from the American soldiers. The conditions at their destination, the Army’s prison camp at Bosque Redondo in New Mexico territory for those who survived the death march to get there alive were inhumane.

To approach such a subject at all in an artwork is a brave decision, but to handle such an ugly and violent incident so beautifully and peacefully is a crowning achievement and it says much more about Elizabeth Manygoats and her peoples culture and tradition than it does about that of their oppressors. In an interesting and historically resonant artistic touch, the three American soldiers pictured on horseback in the tile are all depicted as having blonde or “Yellow” hair. “Yellow hair” was the pejorative Native American nickname for the notorious American General George Armstrong Custer (1839-1876) who led marauding American troops at the massacres at Sand Creek and Washita River until his ultimate demise at the hands of the Sioux and Cheyenne at The Battle of the Little Bighorn in June,1876. This unique artwork sits precisely at the intersection of Navajo pottery, Navajo folk art and the long arc of Navajo history; the pottery being the vehicle for the expression of the other two, essentially storytelling and the expression of a culture’s folklore through art. 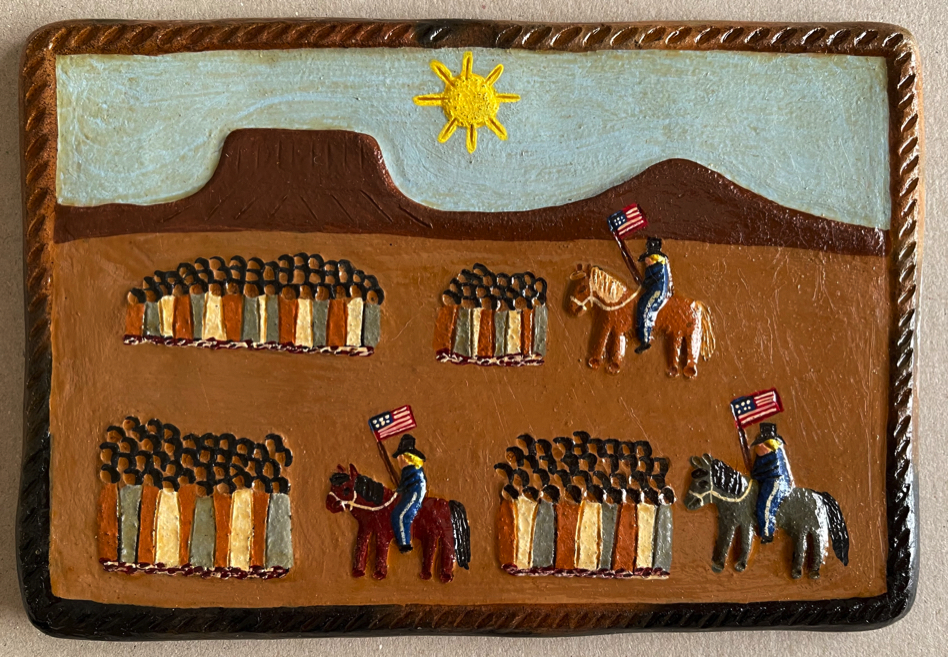 “I hope to God you will not ask me to go to any other country except my own.” 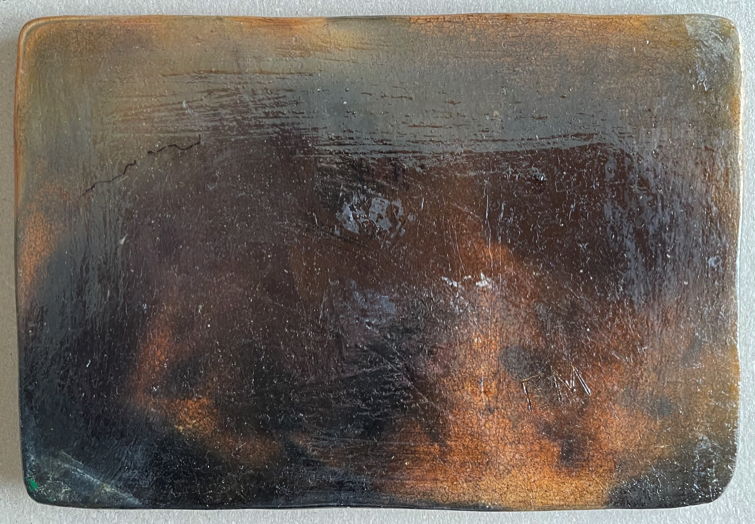 This tile is not for sale, we prefer instead to donate it to an appropriate Southwestern or Native American Museum. The first such museum who says that they want it will receive it from us as a gift. In our view, this tile is a significant piece of Navajo pottery and folk art and an eloquent historic document which we believe should be displayed for and shared with a larger world. The Smithsonian’s National Museum of the American Indian or The Metropolitan Museum of Art or The U.S. Department of the Interior Museum would be ideal and so would The Navajo Nation Museum in Window Rock, The Heard Museum in Phoenix, The Denver Art Museum and The Museum of Indian Arts and Culture or

The Wheelwright Museum of the American Indian here in Santa Fe.

It is in excellent original condition and is properly signed “EM” in inscribed initials on the back.