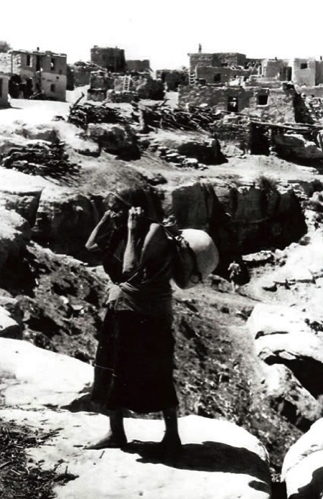 One of the most important traditional pieces of historic Pueblo pottery in existence is the water canteen and nowhere are these more important than in the arid harsh high desert mesas of Hopi land. The Hopi have made canteens of various types and sizes for hundreds of years. Hopi undecorated plainware ceramics canteens generally were made in two sizes, the very large ones pictured below which were traditionally used to carry water from the springs and store it in the home. These large plain canteens are sometimes euphemistaclly referred to as “Snake Canteens” because some evidence exists to believe that Hopi snakes priests would temporarily store the rattlesnakes used in the Hopi snake dance in such canteens.

The smaller size undecorated plainware canteens such as the example we have here are referred to as “personal” canteens and were commonly carried by Hopi men and women while working in the fields or traveling from village to village or any other activity which required extended time outside. Both sizes were made to the same basic design form which is to say that of the round protruding female breast with a flat back two carrying lugs near the top placed at around 10AM and 2PM and a central spout. The female breast is highly significant in that it is of course the first source of life-sustaining nourishment and sustenance every human being experiences.

It is difficult to date this canteen exactly, it could basically have been made anytime in the first three quarters of the nineteenth century. We consulted with the distinguished historic Hopi pottery scholar and author, Dr. Edwin L. Wade about this and he agreed that the general dating was between 1800-1880. 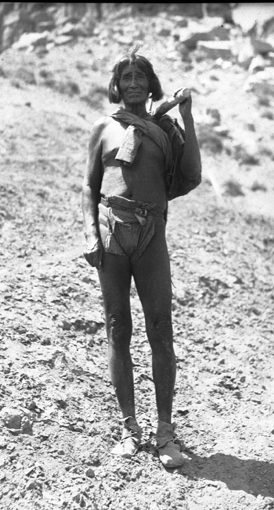 Hopi farmer of Mishongnovi (Mashongnavi) on the way to his fields, Arizona, 1898. He is likely carrying one of these canteens on his back. 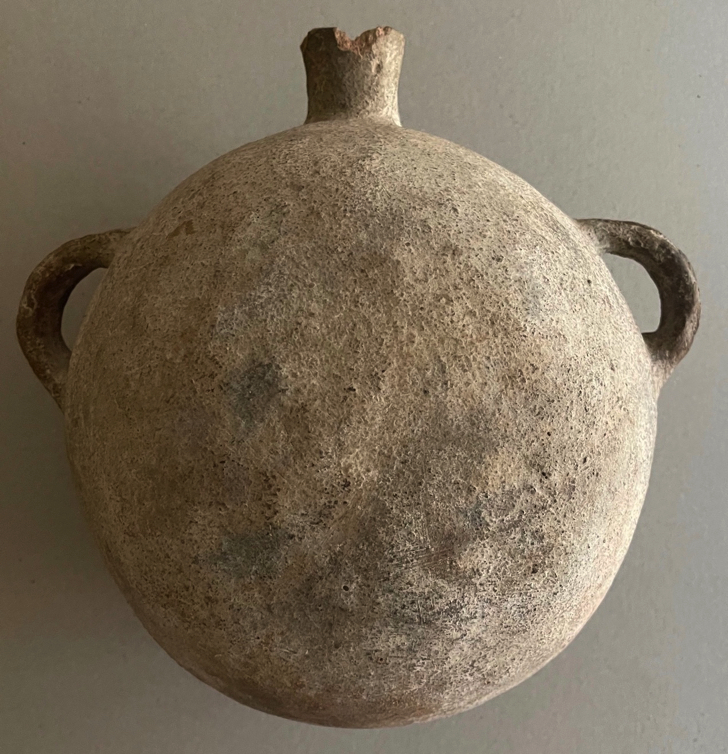 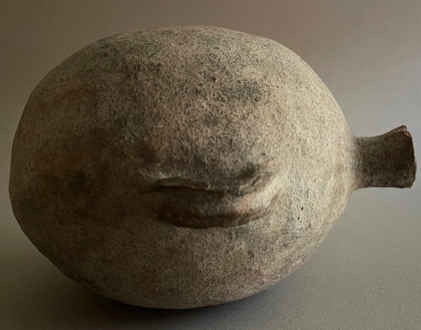 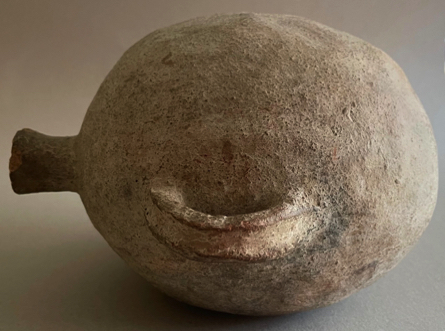 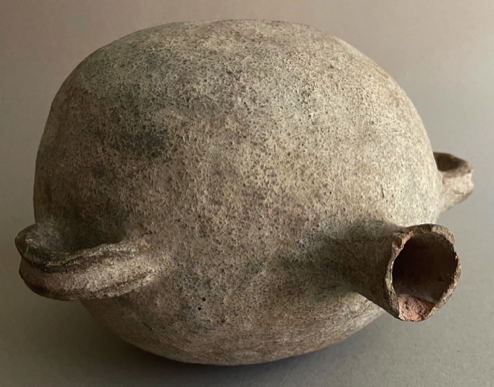 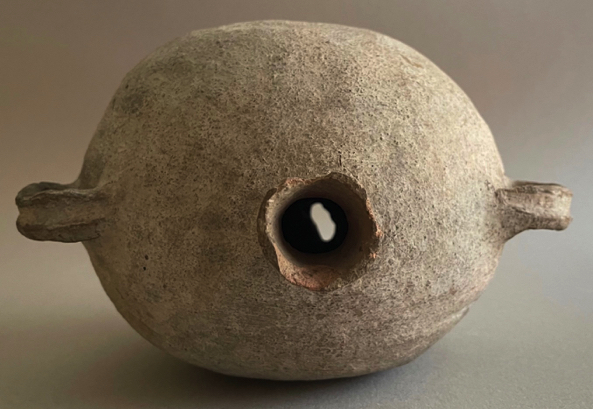 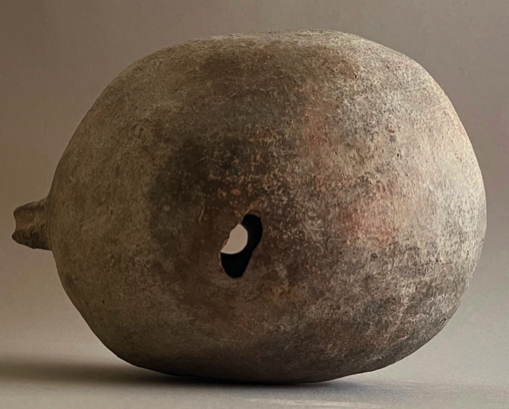 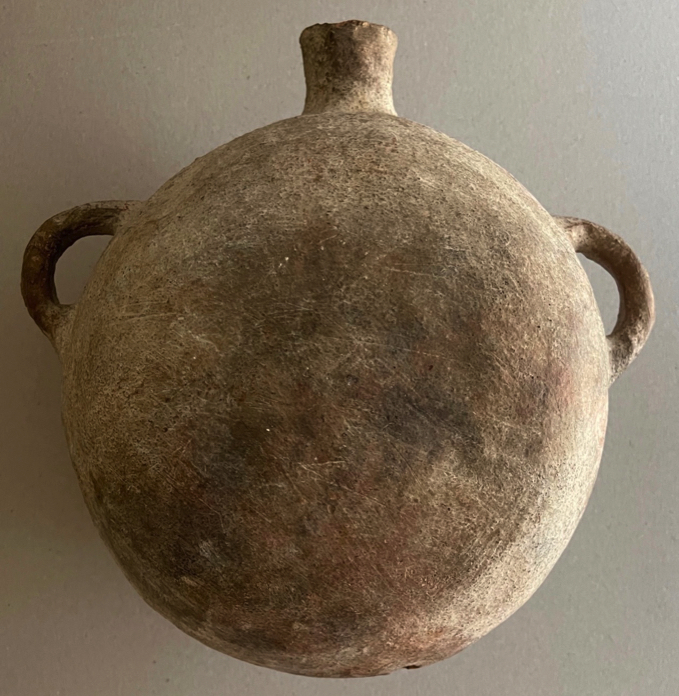 It is difficult to date this canteen exactly, it could basically have been made anytime in the first three quarters of the nineteenth century. We consulted with the distinguished historic Hopi pottery scholar and author, Dr. Edwin L. Wade about this and he agreed that the general dating was between 1800-1870. This canteen is clearly the product of a very highly skilled historic hopi potter, it is beautifully and finely made with thin hard high fired walls and graceful lugs.

Interestingly, this canteen appears to have at some period in its life been used for another purpose than simply carrying water. There is a deliberately made small hole measuring about 1" by 1/2" at the very bottom of the canteen that is in direct alignment with the canteen’s spout opening. At the ancient Zuni Pueblo in New Mexico, whose people have many cultural and historic similarities to the Hopi, small holes are deliberately made in the lower sides of pottery jars in which animal fetishes are stored and corn pollen is inserted into the holes to “feed” the fetishes.

We know of no incidence of this being done at Hopi, but it is certainly possible, also it is possible that after decades

of service the canteen could have been "retired" so to speak by making the hole, but it remains a bit of a mystery.

Also noteworthy and unique about this canteen is its unusually light, whitish color which could be due to a high percentage of white kaolin mineral in the clay and could also be the result of hard alkaline Southwest desert water slowly leaching through the clay body over the decades and leaving caliche deposits behind although it does seem more evenly applied than such deposits would usually be. Also, there is a somewhat gravelly texture to the paste indicating that small ground rocks might have been added to the clay as a tempering agent. As for the clay itself, it has a somewhat reddish-orange hue which would seem to indicate a Hopi Second or Third Mesa clay source and possible place of manufacture such as the villages of Mishongnovi or Oraibi.

The canteen measures 9 1/2" in height and is just slightly under 10" in width at the widest point. It is 7" in depth.

small chips around the spout.

This is beautiful and deeply historic object; a lovely sculptural form and a culturally vital and essential vessel.