style pottery bowl attributed to Nampeyo and possibly made

This beautiful Hopi bowl bears a great many of the telltale characteristic signs of the great pottery Matriarch’s brilliant mind and skilled hands. Nampeyo (1858-1942) was partial, particularly in her early years, to the bone-white color, self-slipped surfaces and high-temperature Lignite coal firing all evident on this bowl and all characteristic of techniques used to produce the extraordinary ancient Hopi Sikyatki-era (1375-1625 A.D.) type of pottery. Beginning in the latter decades of the 19th century, inspired in part by examples of this ancient pottery then being excavated at Hopi by various archaeological expeditions, Nampeyo and others began re-creating or ”reviving” this ancient ware with various design and other modifications of their own.

They sought out and re-discovered the ancient’s clay and coal sources on the Hopi Antelope Mesa and taught themselves the painstaking process of high-temperature coal firing which had previously been lost to the ages for centuries. Done properly, this firing allows for thinner vessel walls and yields the beautiful bone-white almost porcelain-like color and lovely yellow-orange firing clouds or “blushes.”

The design motifs on the bowl, a modern-day interpretation of the so-called Sikyatki “Man-Eagle” also date originally from this ancient era where stylized animal, bird, insect and various mythical creature forms were commonly portrayed on pottery and in painted ceremonial Kiva murals in abundance. The specific stylistic basis for this design appears to be a Siktyatki bowl excavated in 1895 by Smithsonian Archaeologist, Jesse Walter Fewkes (1850-1930), at the ruins of Sikyatki village on the Hopi First mesa. Fewkes referred to this design as a “Man Eagle”. Nampeyo possibly saw this very bowl or a related piece around the time of the excavation and subsequently incorporated elements of it into her own design vocabulary. 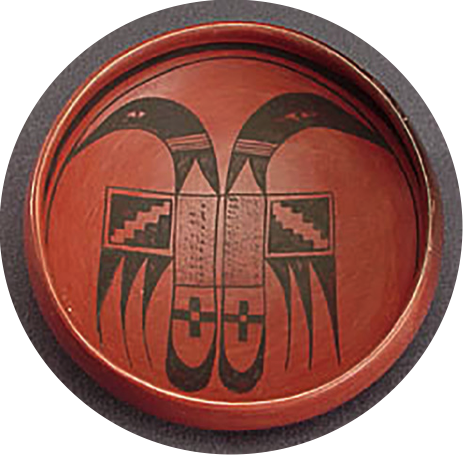 Hopi  black-on-red double bird bowl by Nampeyo, collected 1926, in the collection of the Arizona State Museum, Tucson, Arizona. Note the double-framing lines and the extra coil of clay just under the interior rim.

Her portrayal of the two opposing birds floating in an otherwise empty field in the bowl’s center is elegant and spare. the bird’s upper halves are rendered in the streaky red paint uniquely characteristic of Nampeyo and they are surrounded by double unbroken black framing lines, another indication of Nampeyo’s hand although she did not do this all the time. The bowl’s interior rim also has another more subtle Nampeyo telltale touch, an extra half coil of clay incorporated all the way around the bowl’s inside just under the rim. On top of this add the fine overall stone polishing and excellently achieved coal firing and, in our opinions, you have a typical Nampeyo piece of this period.

It is certainly also a possibility that Nampeyo’s eldest daughter, Annie (1884-1968), helped her to some degree in painting the bowl which was a common occurrence during this period. Young Annie was an excellent painter and she helped her mother regularly, a certain overall "looseness" to the painting and the bowl's black painted rim may be somewhat indicative of this. The bowl's exterior is completely undecorated.

The bowl measures a medium-sized 7 3/4" in diameter and it is 2 1/2" in height. It is in remarkably excellent original condition, and particularly so given its century plus of age, with no cracks, no significant chips or abrasions and no evidence of any restoration or overpainting under a thorough Ultraviolet light examination. There is a virtually unnoticeable tiny slip crack extending down about 2" from the rim, but it does not go through the clay body and is of no real consequence.

This bowl is a lovely modern day evocation of and powerful connection to a past golden age of ancient Hopi pottery made by a distinguished artist of our day; not just in its similar whitish-yellow color but in its overall artistic distinctiveness, technical quality and powerful unique visual impact. 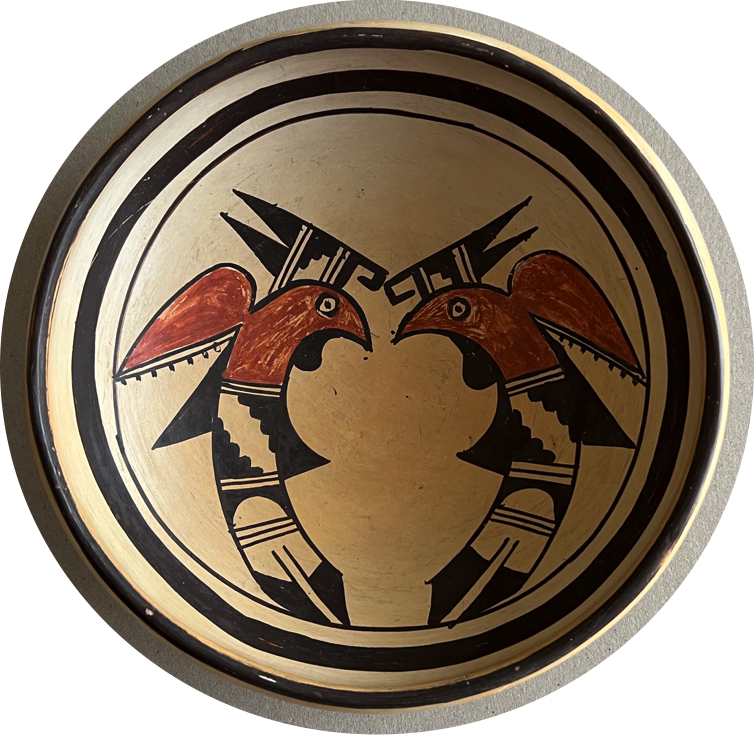 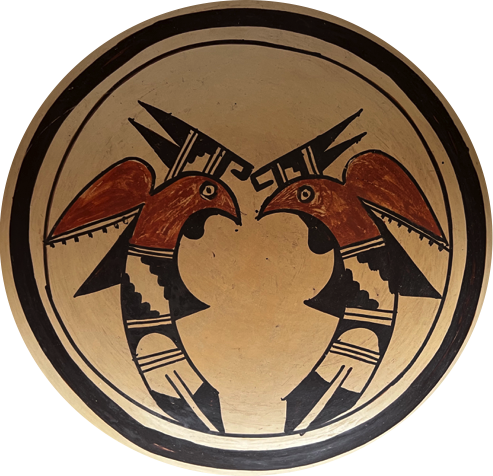 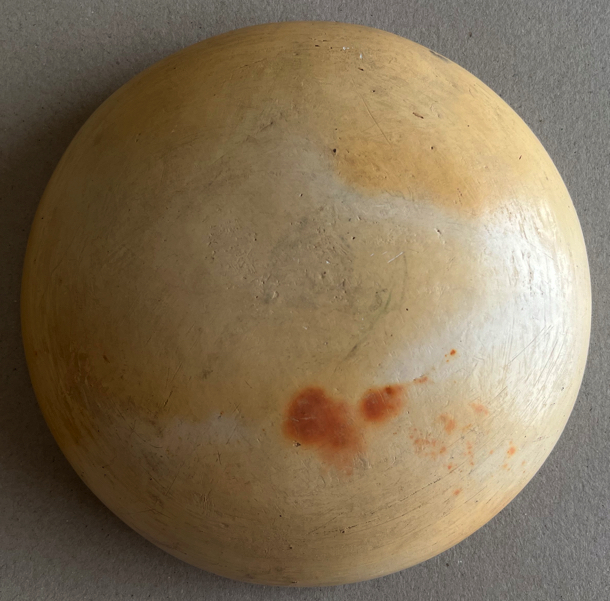 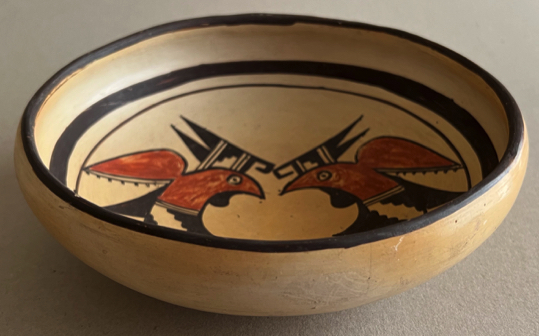 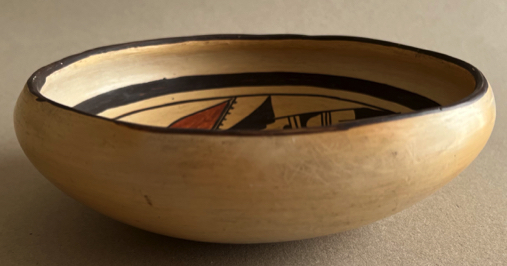 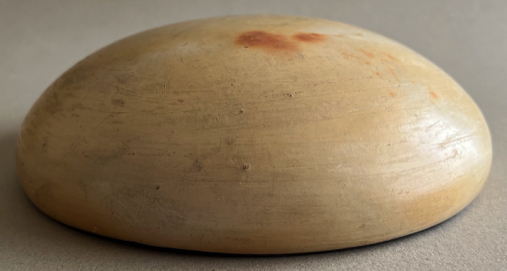 "Nampeyo makes her designs after some she has seen on ancient ware."

The remarkable stone-polishing on this bowl was accomplished using this very polishing stone or another one much like it. When she was a young woman, Nampeyo found this centuries-old polishing stone in the ruins of the ancient Hopi pottery-making village of Sikyatki and after using it to polish her own pottery for many years she gave it as a special gift before her death in 1942 to her then-teenaged Great-Granddaughter, the now-also renowned Hopi potter, Dextra Quotskuyva Nampeyo (1928-2019). Dextra also used it on her pottery and many years later gifted it to her special close friend and ours, the late Santa Fe Native American Arts dealer, Martha Hopkins Struever (1931-2017) , who subsequently gave the stone to us.

"When I first began to paint, I used to go to the ancient village and pick up pieces of pottery and copy the designs. That is how I learned to paint. But now, I just close my eyes and see designs and I paint them".