This particular piece is what we would describe as being a “decorator piece”; meaning that it is not in completely original and historically intact condition but that it still looks beautiful with lots of authentic character and appeal. One of the original tin corner plates at the upper right has been replaced with a panel of newer tin. It also appears as if the original glass central panel was also replaced. Three of the four reverse-painted glass panels have cracks in them, the top, bottom and right, but they are all stable in their channels. One tin corner panel has been replaced.

This can be considered as being an opportunity to acquire a great-looking historic piece at a mere fraction of what the price would be if the piece were completely original and intact which would easily be two to three times higher in our estimation, $3,300-$4,800. The frame is in good “restored” condition overall, especially considering its 120-or-so years of age and use. There is also a fair amount of rust in evidence. It also appears as if the top pediment and the four tin corners have been painted a silver color which could be removed if desired. We have seen this sort of metallic painting in silver and gold pigments occur regularly as a decorative device at various New Mexico Indian Pueblos.

The tin frame measures an impressive 19 1/2” in height and is 16 1/2” in width. Even though it is taller than it is wide, it has a horizontal orientation visually which is uncommon in larger-sized historic New Mexico tinworks.

The handsome, turn-of-the-century black and white religious print inside the retablo is entitled “Christ raising

the son of the widow of Nain”.

This is a visually powerful piece of historic New Mexico folk art and devotional art at what we believe to be an extremely reasonable price. A whole lot of artistic “bang”, so to speak, for not too much buck.

Price $1,650 plus any applicable shipping 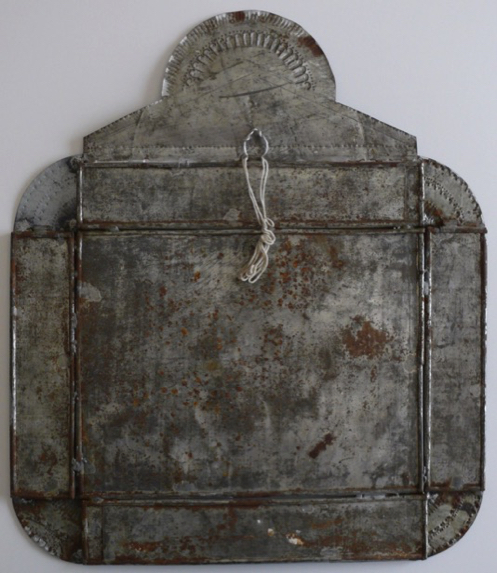 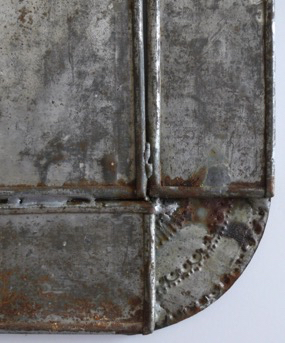 The altar of the church at Isleta Pueblo, c. 1899. Note the multitude of Isleta tin retablos on the wall.

frame made by the Isleta Tin Workshop, c.1900

New Mexico has a unique and ancient cross-cultural history, combining influences from its original Native

American inhabitants, the Spanish conquistadors and colonists and lastly the much later arrival of the Americans. Naturally, this history was not all sweetness and light, but it had many bright and interesting spots among the best of which was seen in the development of various artistic traditions. These historic New Mexico tinwork frames or retablos are excellent examples of this cross-cultural influence; they combine a centuries-old tradition of making Hispanic devotional art with the more commonplace material of commercial American tin lard cans which were first transported here from back east when New Mexico was essentially a foreign country, on wagon trains over the Old Santa Fe Trail and were then eventually salvaged and re-purposed as “found materials” into devotional tin retablos, replacing the older, painstakingly hand-carved and painted wooden retablos for Catholic New Mexico families and churches.

the “Isleta Tin Workshop”, so named for its location near the Pueblo of Isleta, a few miles south of Albuquerque.

The two sides and the top and bottom of the retablo all have beautifully hand-rendered panels of reverse-painted glass in an extremely attractive blueish-green, white and red palette. The overall effect here is richly ornate and marvelously complex, a testament to how beautifully made a folk art object can be with such humble materials as salvaged tin cans, glass, a paper print and house paint. It speaks volumes to the devotion and dedication of its unknown maker in suffusing it with such religious meaning and strength. 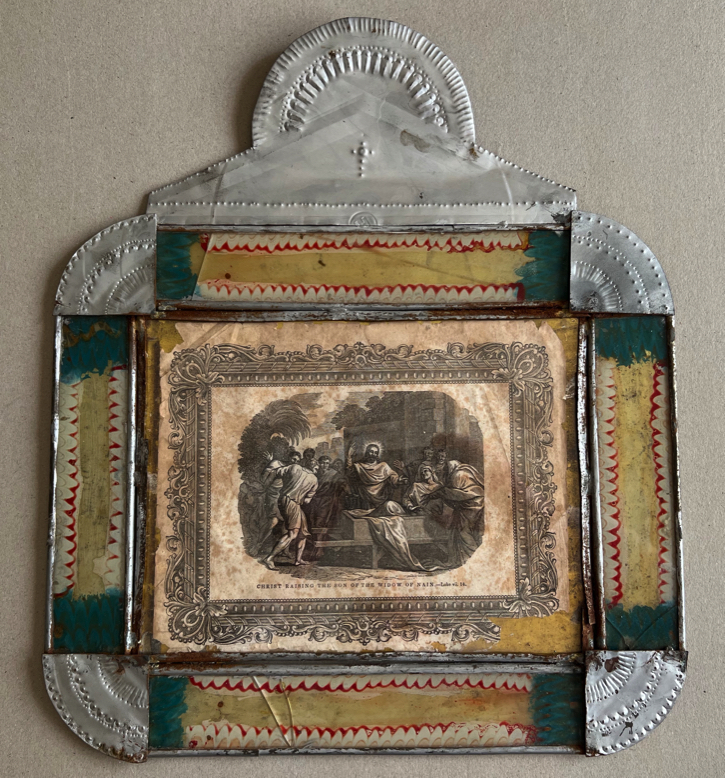 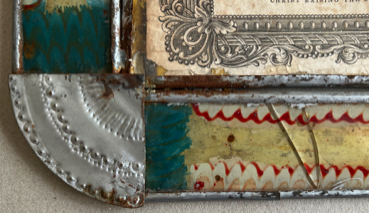 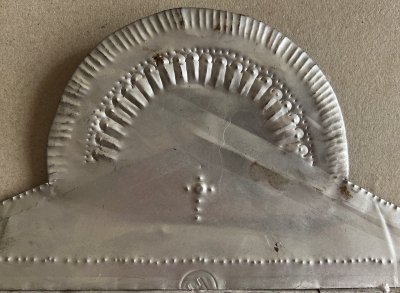 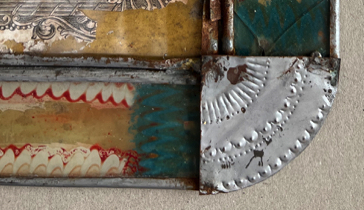