THE MAKER OF THIS REMARKABLE KACHINA DOLL is one of the most interesting and fascinating figures in modern day Southwestern history. Born in 1905 into the prominent family of Bear Clan leaders and Village Chiefs of the ancient 12th Century Hopi village of Old Oraibi on the Hopi Third Mesa which is considered to be the oldest continuously inhabited place in the continental United States, Oswald “White Bear” Fredericks, who is also known by his Hopi name “Kucha Honowah” (1905-1996), was exposed to and intimately involved in from a very early age to the deepest historic and spiritual knowledge of the Hopi people.

It is difficult to overstate the incredible cultural and religious importance of the Bear Clan to the Hopi people, their complex rituals and long history. The Bear Clan is by divine determination in the pantheon of Hopi spirituality enshrined over all other Hopi clans as the pre-eminent Hopi Clan and all of the various Village Chiefs or “Kikmongwis”, in all of the various Hopi villages throughout the many centuries of Hopi history, with one or two historical deviations (aberrations) caused by extreme circumstance are all today and have always been Bear Clan leaders. One of the most famous of these in the modern era was White Bear’s paternal Uncle, Wilson Fredericks, also known as “Tawaquaptewa” or “Sun-in-the-Sky”. Tawaquaptewa (1873-1960) presided over and participated importantly in one of the most turbulent and controversial periods in Hopi history including various U.S. Government interventions, the famous Oraibi village split and other significant occurrences. 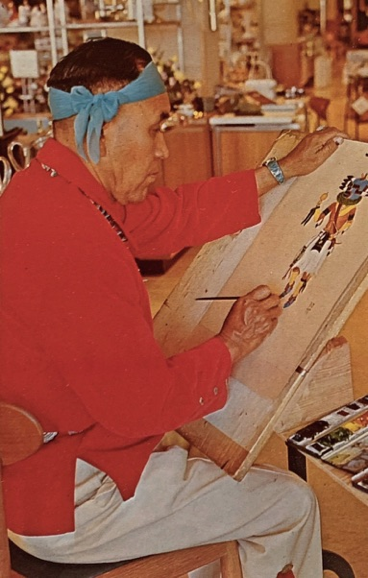 Through all the difficulties with the U.S. Government authorities and polarizing disagreements with numerous of his own people, Tawaquaptewa maintained what he believed to be his steadfast traditional vision and devotion to his people’s well-being. He also consistently created some of the most interesting and unusual Hopi “kachina” dolls.

e put kachina in quotes here because while Tawquaptewa’s Hopi dolls are based in part on actual Hopi kachinas they are not literal or true depictions of the individual kachinas since Tawaquaptewa believed very strongly that given his capacity as a religious, clan and village leader that it would be inappropriate for him to do exact depictions of particular kachinas so his dolls are always his own distinctively stylized representations of Kachina spirits.

Tawaquaptewa’s older brother, Charles Fredericks (1861-1966), White Bear’s father, was also a very fine kachina carver who made more traditional and true-to-form depictions than his brother and the young Oswald learned to do the same. White Bear’s dolls are always meticulously detailed and beautifully wrought versions of the actual kachinas themselves, right down to all the details of their ritual paraphernalia as in this fine Hemis Mana doll.

One of White Bear’s closest lifetime friends was the longtime Arizona Senator Barry M. Goldwater who admired his kachina dolls so much that he commissioned White Bear to create an extensive and definitive collection of them which Goldwater eventually donated to The Heard Museum in Phoenix.

“This is a strange and wonderful book. Its spokesman are some thirty elders of the Hopi Indian tribe in

Northern Arizona. The Hopis regard themselves as the first inhabitants of America. Their village of Oraibi

is indisputably the oldest continuously occupied settlement in the United States.” 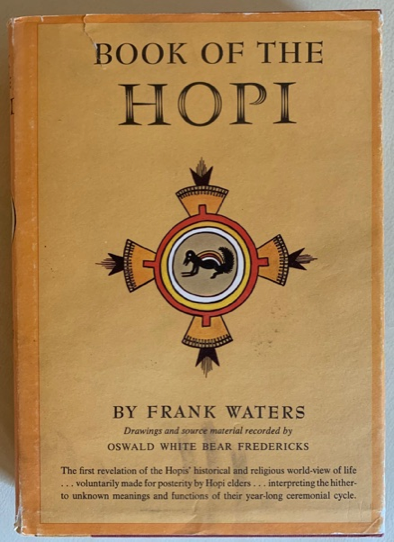 The Book of the Hopi by Frank Waters and Oswald Fredericks, 1963. A project which was originally  conceived in the late 1950’s by White Bear Fredericks as a way to document the history of the Hopi people, this a profound and extremely meaningful book detailing the Hopi creation myths and migration stories and interpreting and explaining the complex Hopi religious world view and ritual calendar. Based in considerable part on a series of some thirty extensive interviews White Bear conducted with prominent Hopi elders and written in conjunction with the great Pueblo scholar, mystic and writer Frank Waters of Taos, New Mexico it is an extremely significant book for anyone interested in Southwestern, Hopi and American history.

The Hemis kachina mana female figure, the doll shown here, is along with the male Hemis kachina one of the two leading figures in the Niman Kachina Ceremony, also known as the “Going Home” or “Home” dance. This is one of the most important rituals in the entire Hopi ritual calendar when the Kachinas “go home” at the end of the spring and summer kachina season to rest for the fall and winter in their spiritual home, the nearby mountains of the San Francisco Peaks just outside present-day Flagstaff, Arizona. At the conclusion of the Home Dance, the kachina impersonators ritually “go home”, walking away in single file from the village and over the side of the mesa towards their home in the San Francisco Peaks. It’s a profound and beautiful sight, and particularly so if it rains. 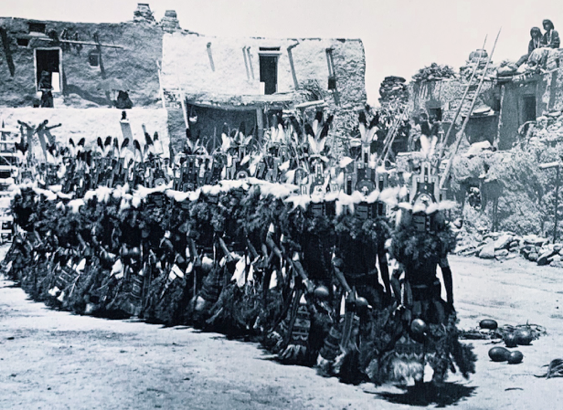 Hemis Kachinas in the Niman Kachina ceremony or “Home Dance”

The spiritual winter “home” of the Hopi Kachina spirits, The San Francisco Peaks outside Flagstaff, Arizona 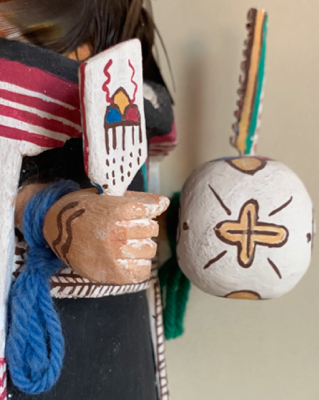 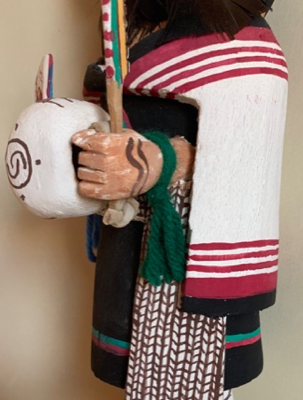 The Hemis Mana kachina’s role in the Home Dance is serene and beautiful and like most Hopi dances, it is a complex mystery play and profound prayer in search of rain, the life giving nourishing moisture in this harsh, arid desert country. While the male Hemis kachinas with their elaborate headdresses dance in a line, the Hemis manas adorned in their ceremonial manta shawls and distinctive maiden hair whorls kneel on the ground facing them and using their distinctive large  gourd resonators painted with clouds and rain designs, wood rasps and sheep scapula bone scrapers they create together a distinctive loud rhythmic sound which is reminiscent of the rolling of distant thunder.

“White Bear Fredericks spent most of his life as a Hopi artist and story-teller. One of his accomplishments was the carving of the Goldwater Kachina Collection, now residing at the Heard Museum in Phoenix. His second major accomplishment was the collection of oral histories for Frank Waters and publication of Book of the Hopi.”

-Bob Cody, Curator of the Special Collection of the papers of Oswald

This large Hemis Mana doll stands a substantial 12” in height not including the feather on top of her head.

The detailing on the doll is absolutely remarkable. Fredericks carved and painted the doll, her colorful clothing and regalia and all her specific attributes; gourd resonator, wooden rasp and scapula bone scraper in exquisite color and detail. The condition of the doll is amazingly absolutely pristine, almost brand new in fact and particularly given its nearly 60 years of age; the colors are fresh and vibrant, the paint rich and completely un-abraded. It’s almost as if this piece has been placed in a time warp since the day White Bear finished making it and in a way it was. According to the information we have, the doll was originally purchased directly from White Bear at Hopi in 1960 or 1961 and then nearly 60 years  later in 2019 we purchased it from its original owner. The doll is beautifully and properly signed by White Bear on the bottom of one foot with his customary and distinctive insignia of the loop de loop path of a falling snowflake, signifying “White” and the imprint of a bear paw signifying “Bear” and the word “Hopi”. On the doll’s other foot, White Bear inscribed the word “Mana” in pencil.

We were privileged to know White Bear Fredericks quite well during the late 1960’s and early 70’s and to spend considerable amounts of time with him. Among other things, we were able to watch him in the process of creating several of his kachina dolls and we have seen numerous others of his distinctive pieces over the years both in the marvelous Barry Goldwater Kachina collection and elsewhere and we can say with confidence that this doll is one of the finest of his that we have ever seen and in such extraordinary condition; a beautifully realized depiction of an important kachina spirit by a distinguished artist and an important religious, cultural, political and historic Hopi figure and a serious intellectual contributor to our and the entire world’s understanding of this complex, mysterious and extraordinary ancient Native American culture. White Bear Fredericks devoted his entire life to interpreting and explaining his culture in various ways and his art depicts it with great power and deep, lasting meaning.

A description of the Hemis Mana kachina by Hopi kachina doll authority, Dr. Harold S. Colton, Founder of The Museum of Northern Arizona 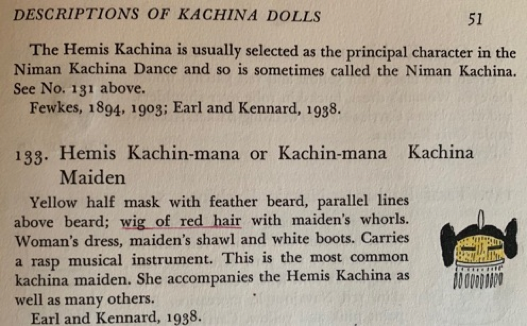 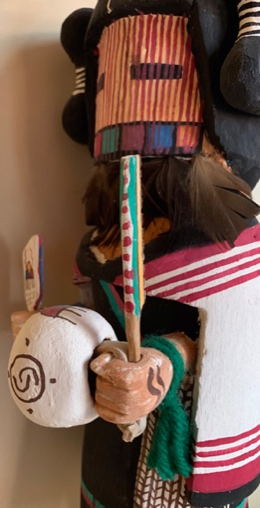 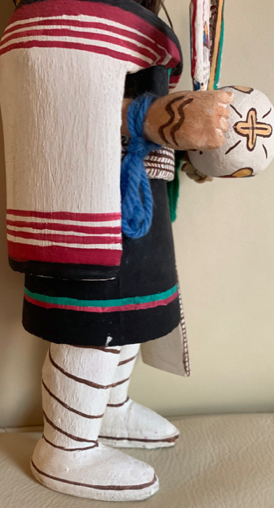 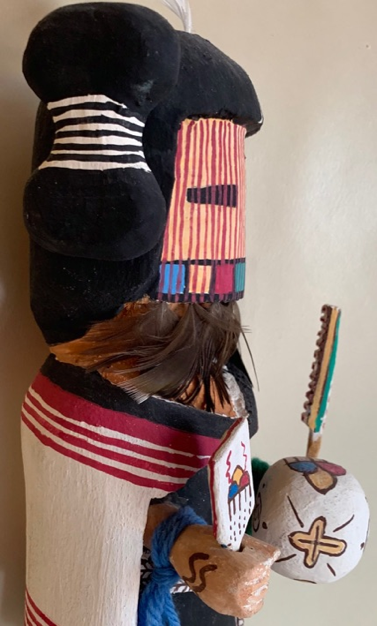 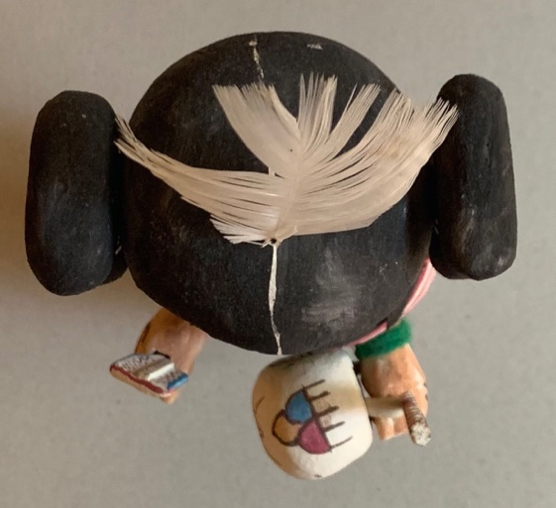