The legendary Hopi pottery Matriarch, Nampeyo of Hano (1858-1942), was a magician of sorts who could make birds appear out of thin air. Through her almost supernatural design genius, she was able to depict the birds on this jar facing both forwards and backwards at the same time thus creating the optical illusion of their being eight birds instead of four around the outside of the jar. Such is her brilliance that a two-part opposed design becomes essentially a four-part opposed design and secondary figures formed by the primary designs have a particularly interesting and somewhat humorous apperance, almost human characteristics in some ways with pronounced "shoulders", "bellies" and "legs and feet".

This cylinder jar bears all the marks of Nampeyo’s fine work; an excellent perfectly formed shape, exceptional all over long-stroke top to bottom stone polishing, precise painting with classic Nampeyo “Sikyatki Revival” style design motifs using her characteristic streaky red paint, wonderful use of negative and positive spaces within the designs which is what really makes this unique design work and a design field bordered by unbroken framing lines and the extremely difficult use of ultra-high temperature lignite coal firing to yield an almost bone-white Sikyatki type 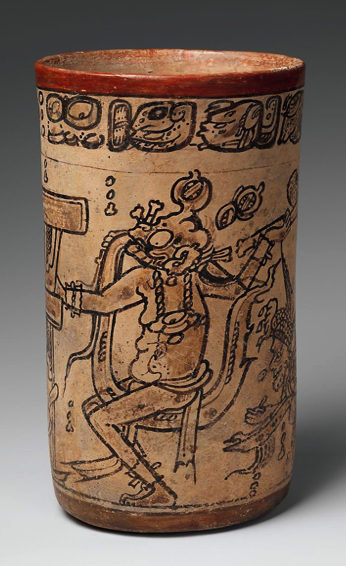 Nampeyo did not start the Sikyatki pottery revival at Hopi in the late 19th Century, but she quickly became the undisputed master of it and this vessel is solid evidence as to exactly how well she did it. The cylinder jar per se is not an ancient Hopi pottery form, but it was an established and well-known pottery form in both ancient Meso-American civilization such as the Maya and the prehistoric civilization at nearby Chaco Canyon in Northwestern New Mexico where they were used for the ritual consumption of chocolate and there is no question that the ancient Hopi would have seen and been aware of this pottery form through their extensive trade networks with both Meso-America and Chaco Canyon.

Also, and significantly much later in time, the prominent American amateur archeologists, Richard and Clayton Wetherill, the discovers of the ancient ruins at Mesa Verde in Colorado and one of the earliest and primary excavators of the Chaco Canyon Pueblo Bonito ruins in New Mexico (The only specific ruin at Chaco where the Chacoan cylinder jars were found.) were significant and frequent clients of Nampeyo’s beginning in the last years

of the 19th Century around 1890 even to the extent that they were given lodging in Nampeyo’s own home.

The Wetherill's purchased Nampeyo's pottery for sale in their family's trading post in Mancos, CO. The Wetherill’s prescence, participation and patronage of Nampeyo's Sikyatki Revival pottery work at Hopi at this time, was significant and it is well within the realm of possibility that Richard Wetherill might have shown Nampeyo a

Chacoan Pueblo Bonito pottery cylinder jar which he had excavated and asked her to make her own version of it.

“Our landlady makes the best pottery in town.”

Thus, this jar is an interesting melding of two important prehistoric Southwestern traditions; a Chacoan cylinder style jar decorated with a Hopi Sikyatki style so-called “man-eagle” design as excavated by Smithsonian archeologist, Jesse Walter Fewkes, at Sikyatki village in 1895 as seen above and subsequently used and popularized by Nampeyo and other Hopi potters on numerous pottery vessels.

The cylinder jar measures a good-sized 10 5/8” in height and it is 4 1/2” in diameter at the widest point. It is in generally excellent original condition particularly for its 120 or so years of age with a certain degree of age-appropriate abrasion wear in places and some small amount of old water staining. There are also two small hairline slip cracks around the jar's mid-section which do not appear to penetrate the clay body and pose no stability problems. A thorough examination of the vessel under Ultraviolet light reveals no evidence at all

of any restoration or overpainting.

There are some interesting old turn of the Century Indian trader type pencil inscriptsions on the bottom of the jar; a price of $5.00 whichs in 1905 would have been a not insignificant sum which could have alternatively purchased five pounds of coffee, fifty cans of Campbell’s soup, five pounds of chocoalte or fifty large boxes of Quaker Oats and also the word “Hopi” and an unidentifiable numeric code, likely from an Indian trading post “RB24”. There is also a small remnant of an old adhesive paper label on the jar's bottom, very possibly a Fred Harvey Company "Made by Nampeyo Hopi" or "From the Hopi Villages" price tag label.

This jar is an exotic and extremely rare bird indeed, pardon the pun, and it should be clearly viewed as such;

times and possibly of all time. 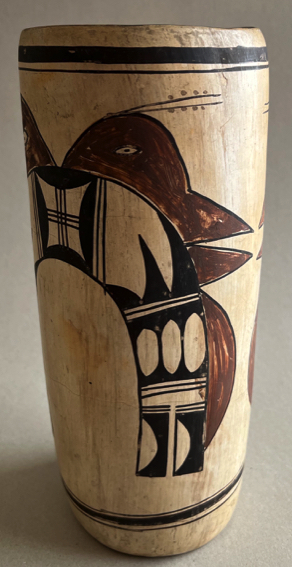 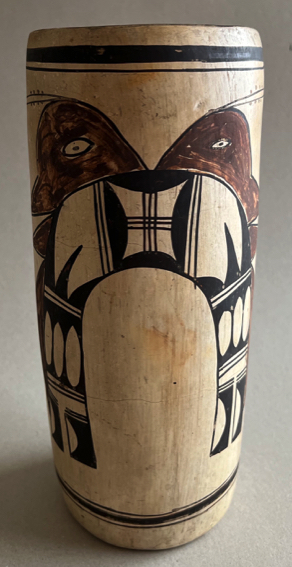 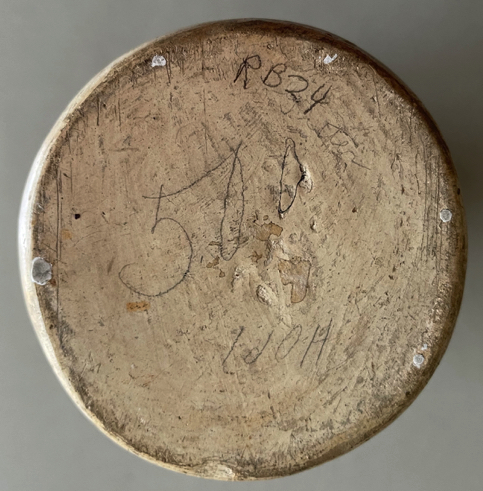 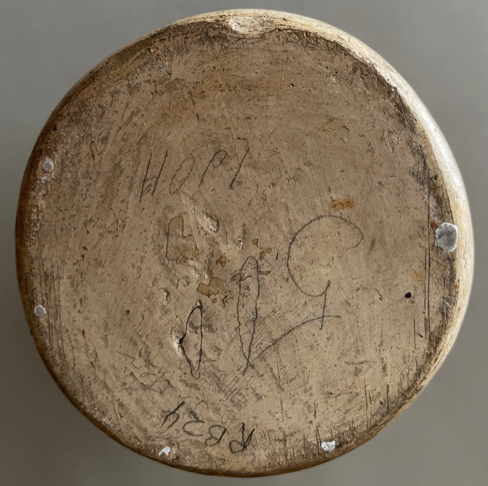 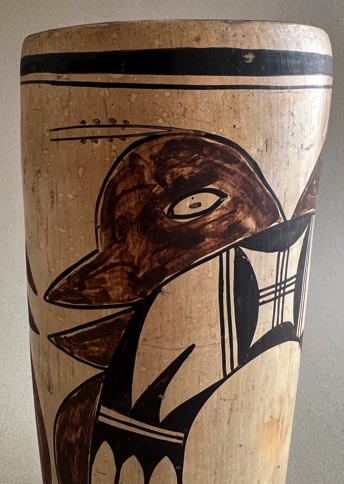 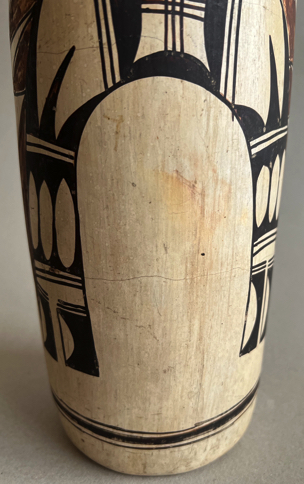 “When I first began to paint, I used to go to the ancient village and pick up

pieces of pottery and copy the designs. That is how I learned to paint. But now,

I just close my eyes and see designs and I paint them.” 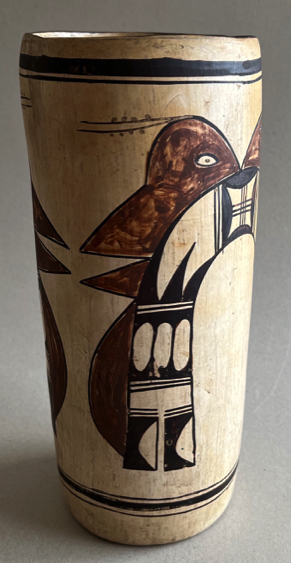 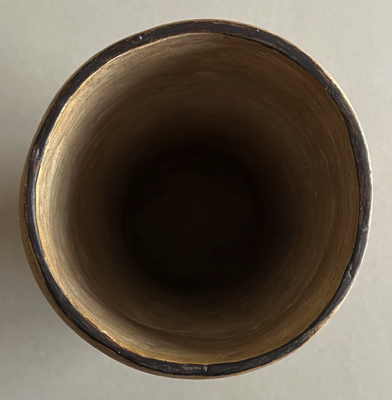