The Fred Harvey Company called them “discs”, old-school American Indian art dealers call them “Flying Saucers”, academics call them “low-profile jars”, but whatever term you prefer to use, these Hopi Sikyatki-Revival style jars have an absolutely gorgeous sweepingly low and daringly flat shape derived from the outstanding ancient Sikyatki Period (1375-1625 AD) Hopi pottery jars, perhaps the high-water mark of any form of pottery ever produced

anywhere in the Americas.

But the great 19th and 20th century Hopi pottery matriarch Nampeyo came so close to this ethereal greatness, perhaps even exceeding it at times, that no less than the Smithsonian Institution Archaeologist Jesse Walter Fewkes (1850-1930) who first excavated the ancient ruins of the Hopi Sikyatki village in 1895 and first exposed its incredible pottery to the world expressed the somewhat self-righteous and fairly inaccurate concern that Nampeyo’s “revival”

of this ancient tradition might easily be mistaken for the ancient ware itself. Fewkes clearly did not understand or properly appreciate the startlingly original compositions that Nampeyo was creating using the Sikyatki tradition as an inspiration but developing it clearly in her own direction.

“The most expert modern potter at East Mesa is Nampeo, a Tanoan woman who is a thorough artist in her line

of work. Finding a better market for ancient than modern ware, she cleverly copies old decorations, and imitates the Sikytaki ware almost perfectly. She knows where the Sikyatki potters obtained their clay, and uses it in her work. Almost any Hopi who has a bowl to sell will say that it is ancient, and care must always be exercised in accepting such claims.” 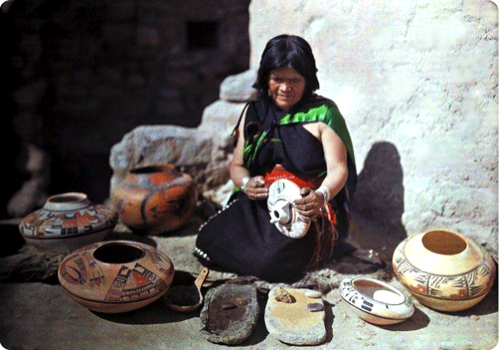 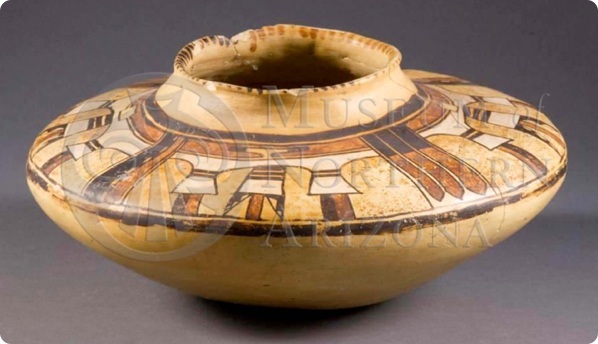 one of America’s first great Modernist painters working thousands of miles away from the country’s centers of contemporary art under conditions that would have made her modern art contemporaries; Picasso, Miro, Bracque etc. quake in their shoes and run for the hills in fear.

This small jar is a turn of the 20th century piece made at least in in part as a non-functional decorative art piece for the then bourgeoning tourist trade in the Southwest. Nampeyo was the first Native American art rock star and she was The Fred Harvey Company’s premier Native American attraction; hordes of eager archeologists, ethnologists, Museum curators, artists and intrepid tourists made their way out to the remote Hopi mesas to watch her work and perhaps buy a piece of her pottery as a memento of their momentous visit. Small jars such as this one were easily transportable and more than a few made their long way back east or west to population centers such as Chicago, New York, Boston and Los Angeles stowed in their new owners luggage on The Santa Fe Railway and naturally while staying between stops at the  various Fred Harvey Company Hotels along the way such as the nearby El Tovar on the South Rim of the Grand Canyon or The La Posada in nearby Winslow, AZ or Albuquerque New Mexico’s Hotel Alvarado. 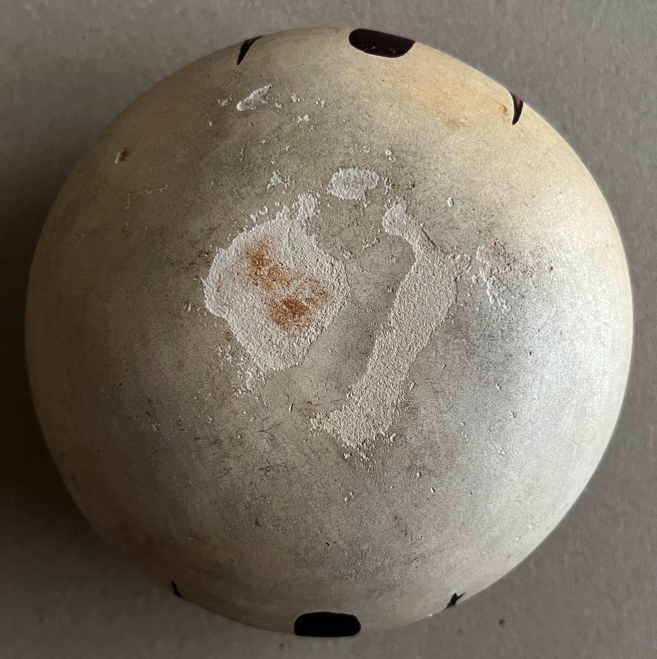 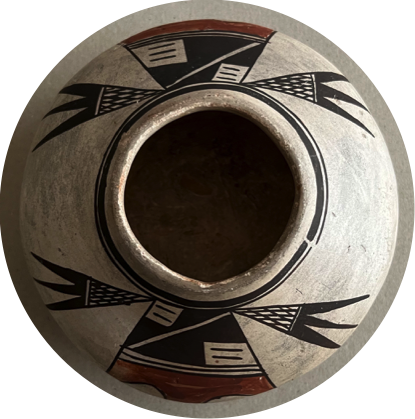 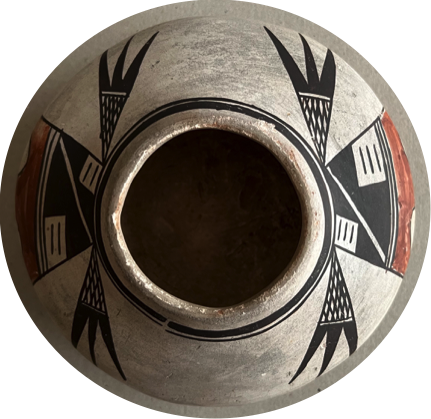 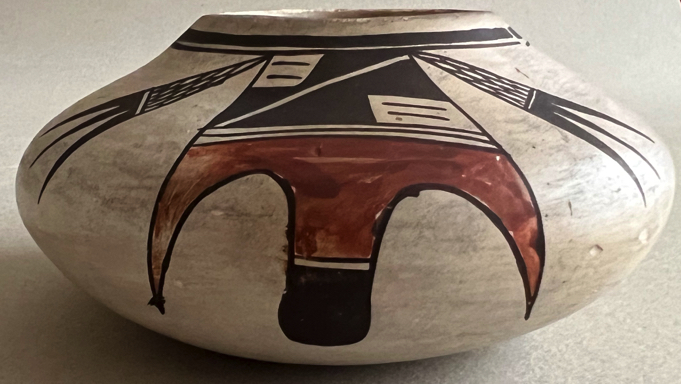 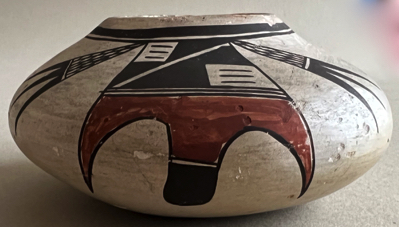 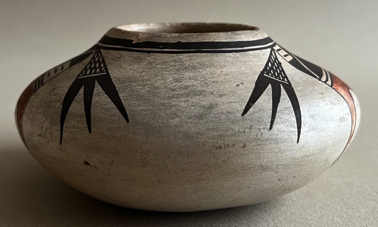 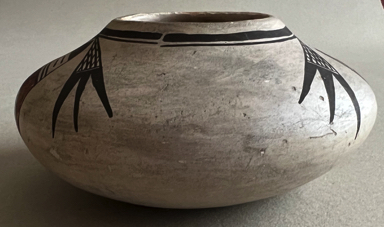 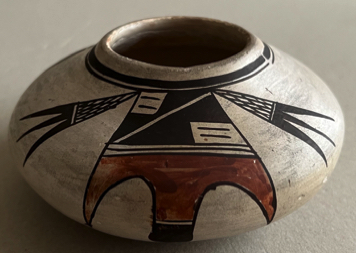 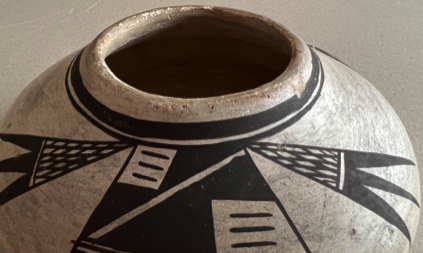 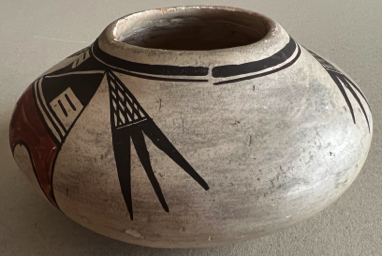 It was a rite of passage of sorts for the daring adventurous Anglo-American tourist to come to the Grand Canyon, to stay at the magnificent El Tovar, to visit the famed Fred Harvey Hopi House there and to watch Nampeyo give a pottery making demonstration and to come away with a piece such as this to commemorate the grand adventure. And very likely that is why this particular piece is in such excellent original condition, having been collected early from the source or very near the source and having been treasured for the last century plus since.

The jar's starkly Modernist and bold design is a characteristically Nampeyo symmetrically-opposed two-part configuration with a marvelous use of positive and negative space, another Nampeyo telltale. As is often the case with Nampeyo's work, the painted design seems to "stretch" the physical boundaries of the vessel making it seem larger than it actually is. The jar measures 5 1/4” in diameter and is 2 1/2” in height. It is in generally excellent original condition with some abrasions and minor nicks to the rim and shoulder; fairly remarkable for its 120 or so years of age. Examination under ultraviolet light reveals no evidence of any restoration or overpainting. A larger area of abrasion on the bottom might speak to the possibility of an adhesive paper label once having been affixed to the bottom,

a common occurrence with Nampeyo’s pottery purchased through the Fred Harvey Company.

tradition, culture and history, all held in the palm of your hand. 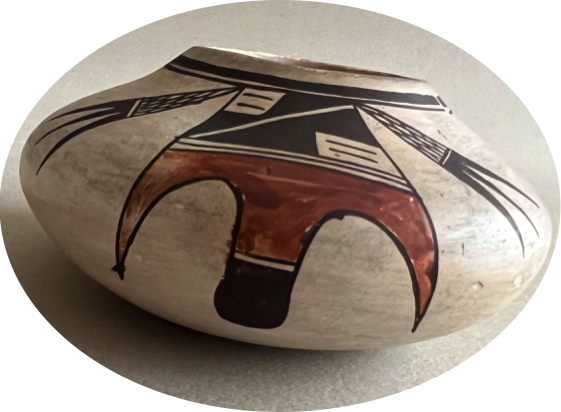 At left, one of the so-called "McMinnville UFO" photographs taken in 1950 of a UFO or "Flying Saucer" in McMinnville, Oregon as later reproduced in LIFE magazine. Could the ancient Hopi Sikyatki-Period potters have possibly seen something similar up in the sky back in the late 14th Century and been inspired by it to make their amazing low-profile shaped jars?