ARTISTIC GREATNESS often emerges from the most humble of origins, places and circumstances and none more so than in the case of the historic New Mexico tinworks of 1860-1920. They are a very early example of the modern term “recycling” in that they originally began their lives in a very different form, that of commercially manufactured common tin cans. These tin cans of various sizes, originally containing lard, coffee, vegetables, flour and other substances were originally brought into New Mexico by wagon trains traveling overland to Santa Fe along the old Santa Fe Trail from St. Louis Missouri, a trail which was first opened in 1821.

The new ready availability of commercial tin metal made for a critical development in the long history of New Mexico devotional artwork. Up until the last half of the 19th century, New Mexican religious retablos had always been typically and traditionally crafted from boards of painstakingly cut and hand-adzed local Ponderosa pine wood which were then carefully carved, gessoed and painted with the images of various saints and other religious tableaus. Now retablos could be made more quickly and inexpensively with the easy and widespread availability of completely commercial, mostly salvaged materials now at hand; used empty tin cans, discarded panes of window glass, unused wallpaper fragments, colored seed packets and commercially produced printed religious images.

To make such a tinwork “retablo”, a tinsmith would first secure a number of salvaged commercial tin lard or other cans which would then be cut, shaped, fashioned, stamped, soldered, decorated and occasionally painted and ornamented in various ways and with various materials such as colored and patterned pieces of salvaged wallpaper or paper flowers to make the desired size and form of the tin frame. The tinsmith would set the frame with the desired paper religious print or with an arrangement of multiple prints or small Holy Cards or fancy colored chromolithographs many of which were often obtained directly from local Catholic priests often at the Church itself. In addition to tin retablos, other forms of New Mexico tinwork commonly made during this time period were wall sconces, candlesticks, wall nichos, candelabra, small boxes and large processional pieces as well as various small tin attributes, such as crowns made for accenting carved wooden bultos and santos.

As was most likely in this case of this particular retablo, many historic New Mexico tinwork retablos were made to a specific order and purpose for a particular individual, private family or small religious organization such as a Penitente Morada or local village chapel. In the case of this particular piece, the artist who made it is readily identifiable as Jose Maria Apodaca (1844-1924) as can be ascertained by numerous certain telltale characteristics of the work itself, notably its overall design layout and general appearance, the specific square profile flat formation of the tin channels, the design of the tin corners, the stamp worked designs on them and the intentionally elaborate and artistic use of fancy colored wallpapers. Apodaca lived most of his life in the remote tiny one-horse village of Ojo de la Vaca which translates to “Eye of the Cow” located about 20 miles as the crow flies to the southeast of Santa Fe.

Local area people knew him as a “hojalatero” or “tinsmith” and they came to him with commissions and orders. Apodaca also traveled regularly around the local area and even further afield with his tools and materials soliciting work and made tinworks for people in other new Mexico villages and towns possibly even traveling as far north as some of the small Hispanic border communities of southern Colorado such as Antonito, San Luis and La Jara. Jose Maria Apodaca is generally considered to be the finest and most accomplished of all known historic New Mexico tinsmiths with the possible exception of his contemporary, Higinio V. Gonzales (1842-1921), who also made a variety of beautiful, high-quality work. Apodaca’s pieces, particularly his later 1890-1910 works such as this retablo, are certainly among the most complex and elaborately and well-crafted New Mexico tinworks often using multiple tin, glass and wallpaper panels and elaborate scalloping, painting and other added fancy decorative touches.

View of the ruined church in the now-mostly

The retablo measures an impressively-sized 16 1/2” in height and is 15 1/4” in width. It is composed of five tin and glass panels in all; a large central glass panel containing a beautifully-rendered and titled religious print of “Christs agony in the garden” which is surrounded by four other rectangular tin and glass panels each containing carefully assembled arrangements of pieces of variously and richly-colored wallpapers which all beautifully complement and accentuate the colors in and the composition of the central religious print. It is a beautiful, expressive, harmonious and artistic composition and assemblage overall, perfectly characteristic and evocative of Apodaca’s exalted artistic sensibility and unique technical virtuosity.

The retablo is in remarkably excellent original condition and particularly so considering its 130 or so years of age and the remote rugged frontier region in which it was born and spent its life. There are no cracks at all to any of the five glass panels and none of them appear to have been replaced. This is somewhat unusual for a New Mexico tinwork of this age and large size and it indicates the strong likelihood that the piece was unusually well-cared for over the years of its life and/or that it possibly hung undisturbed for a long time period in a specific religious building or family home.

This retablo is a beautiful, rare and highly-refined historic artwork almost miraculously created from the humblest of salvaged materials by an inspired and brilliant New Mexico folk artist, a piece which perfectly reflects the time, place, faith and unique geographic and historic circumstances of its creation, but which also projects a completely timeless and lasting universal artistic beauty, humanity and devotional spirit. 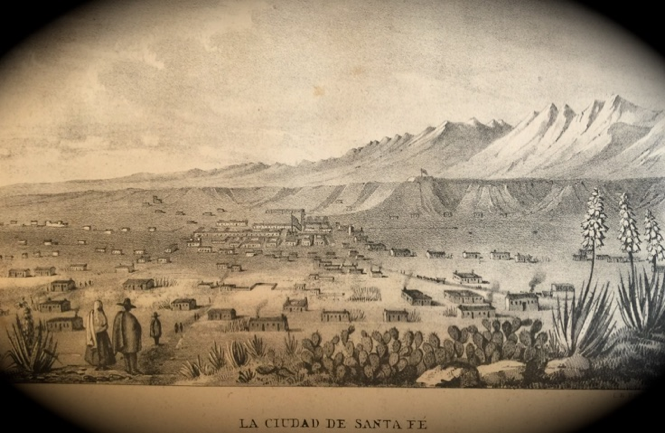 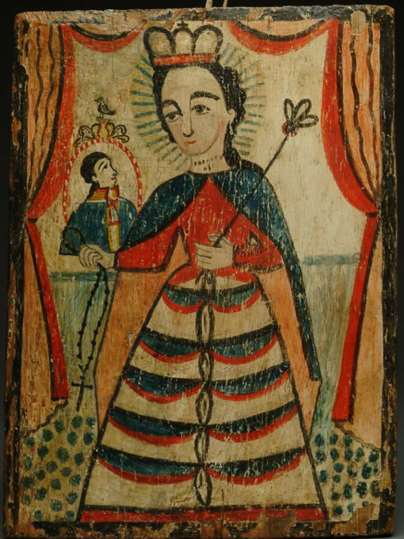 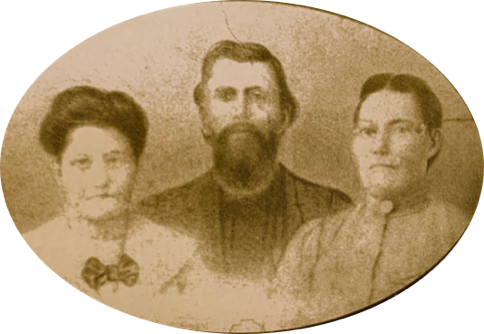 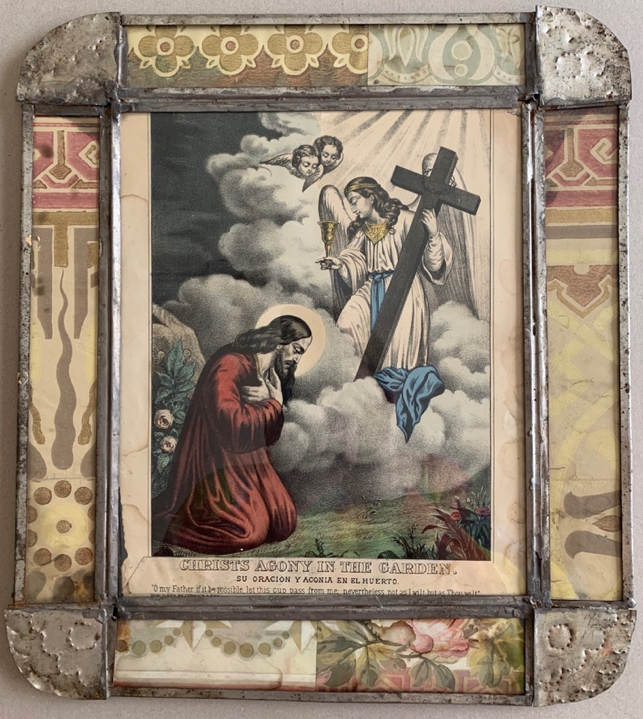 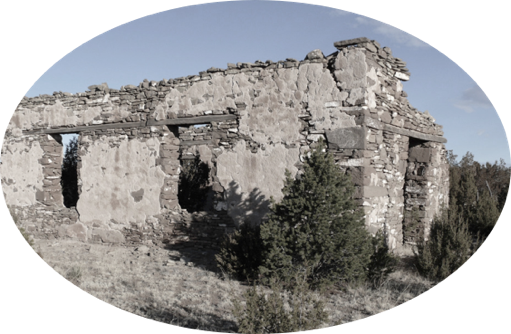 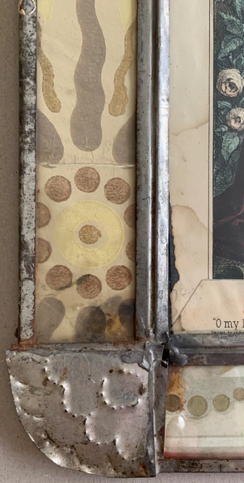 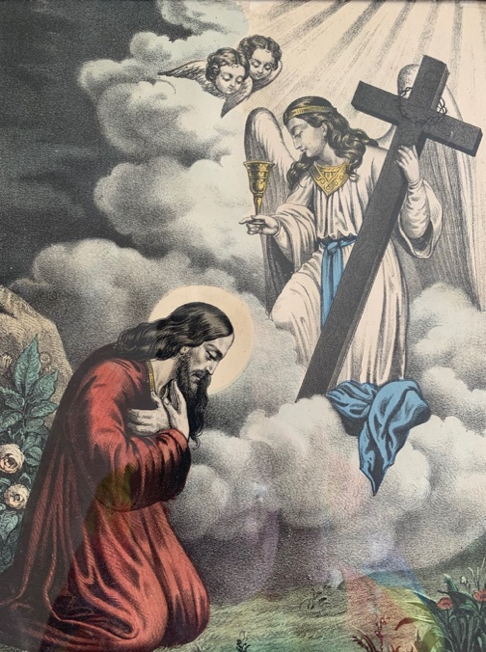 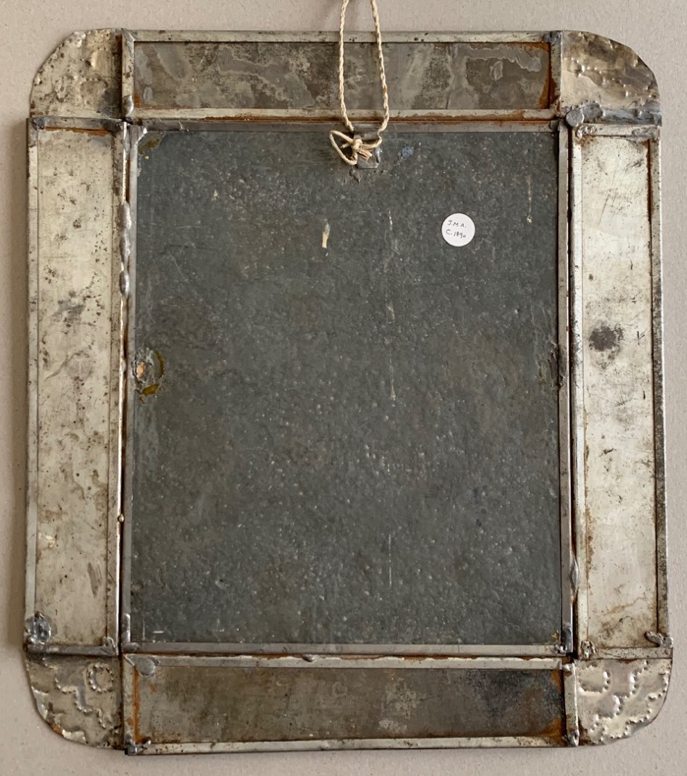 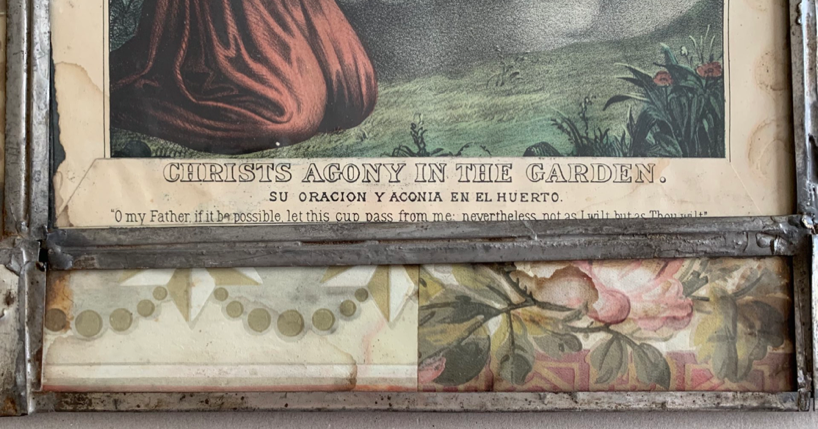