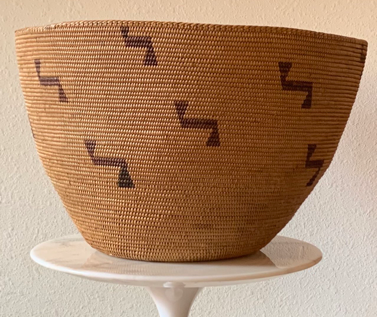 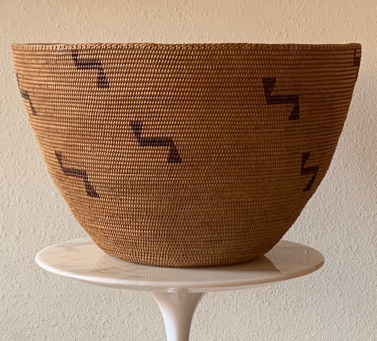 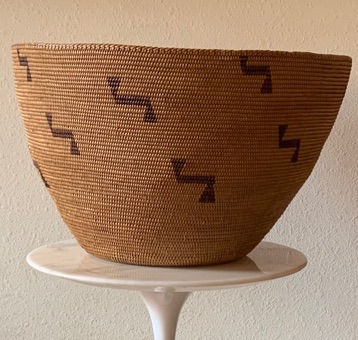 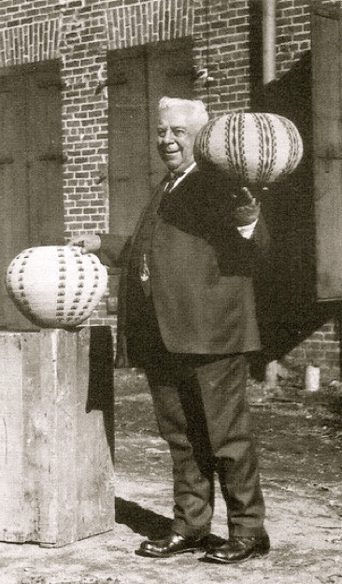 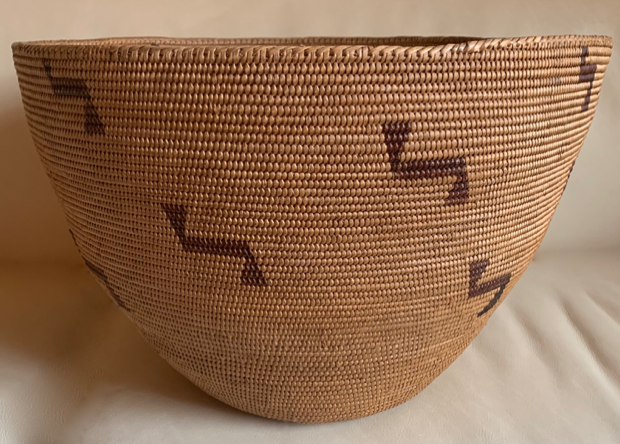 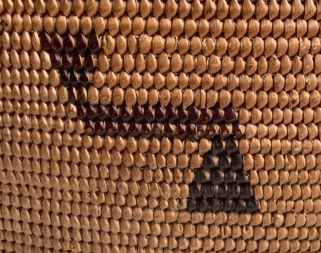 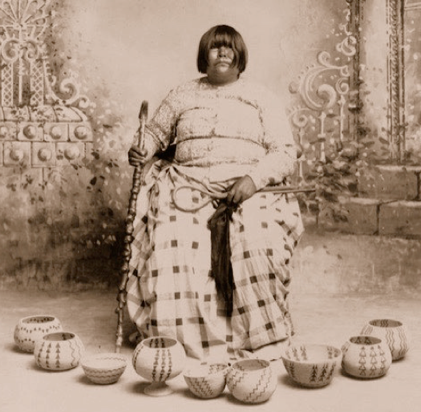 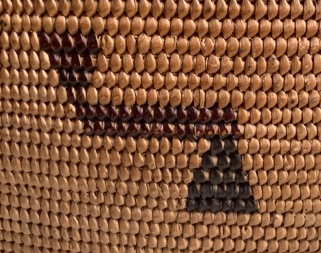 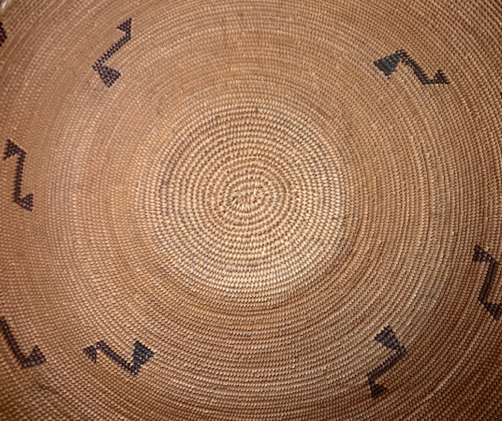 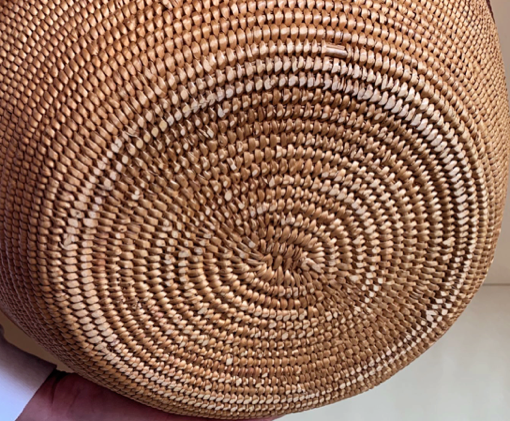 “WASHOE” IS ONE OF THE MOST SIGNIFICANT MAGIC WORDS when discussing Native American basketry for the very simple reason that the Washoe Indians, indigenous to the Great Basin region around Lake Tahoe on the California/Nevada border, wove some of the very finest and most remarkable historic baskets ever made in North America or anywhere else in the world. Some of the most famous Native American basket weavers of all time were Washoe women, led of course in renown by the inimitable Louisa Keyser (1835-1925), also known as “Dat-so-la-lee”, whose extraordinary “Degikup” fancy decorated baskets regularly bring hundreds of thousands of dollars today at auction and in private sales. In addition to Dat-so-la-lee, there were a number of other legendary Washoe fancy basketry weavers such as Lena Dick, Sarah Mayo, Maggie James and Scees Bryant and then there were a great many other completely anonymous, yet incredibly accomplished weavers like the unknown woman who wove this wonderful large  cooking or feasting bowl, who never received public acclaim or recognition or commercial commissions, but who simply wove fabulous traditional baskets for their own people’s use.

This large bowl is solidly in that latter ethnographic category; an impeccably-woven, traditionally-shaped, styled and created Washoe cooking or feasting bowl into which red-hot heated rocks would be dropped to cook up a large batch of acorn mush or pine nut soup. However, in the case of this particular bowl, even though it was originally made to be used, it appears to almost never actually have been used so pristine is its original condition particularly for a piece of 115-120 years of age.

Abe Cohn in front of his Emporium in Carson City,

In the first quarter of the 20th Century the fancy Washoe baskets made by Dat-so-la-lee and her colleagues were being presented, sold and collected with much fanfare by various non-native trading post entrepreneurs such as Abe Cohn in his famous Emporium in Carson City, Nevada as valuable fine art objects not simply as utilitarian implements and this growing collecting interest and fervor eventually extended far beyond the fancy trading post basketry offerings to more traditional, non-fancy pieces such as this bowl and a great many Washoe and other California Indian baskets were collected new or as-new as dealers and collectors went into Washoe and other Native villages to buy older and contemporary baskets directly from the weavers or owners, so hungry were people to acquire such handmade high-status, increasingly prestigious Native American art objects. This “basket craze” also coincided significantly with the “humble, natural materials and traditional hand-craftsmanship are King” general ethos of the American Arts and Crafts movement which had spread to America from England and was ascendant in this country at this time, particularly in California, where a collection of good Native American basketry pieces was considered a status symbol and an essential decorative element of the high-end “Craftsman”-style home.

“The severity of the design on this basket, which is a

Author of “The Arts of the North American Indian: Native Traditions in Evolution”, Hudson Hills, 1986

The basket’s design is pleasantly spare and extremely elegant with a series of 16 repeating geometrically-shaped design motifs floating at nicely-spaced intervals around the body of the basket, designs which are visually very reminiscent of the stylized “topknots” of Gambel’s quail common to the Washoe’s geographic region. These “topknot” designs are traditionally executed in rust-colored split-redbud fiber which makes a nice color contrast against the white willow stitching of the basket. Two of these 16 red topknot designs interestingly have small black accent panels incorporated inside them which are properly made of dyed bracken fern root.

The basket is quite finely-woven for a piece of its considerable size, containing 6+ coils to the inch vertically and 9 stitches to the inch horizontally. The rim of the basket is very nicely braided or “cross-stitched” as is characteristic of such Washoe baskets. As discussed previously, the basket is in exceptionally fine original condition with only a very few broken stitches in a couple places and only the most minor of discoloration anywhere in evidence, but there is no damage and nothing that looks in any way like real “wear". There is a certain degree of “lean” to the bowl when viewed from certain angles, as can be seen in the photos here, which is quite common and normal in larger basketry pieces such as this one. And, this bowl is quite large indeed, measuring a full 18 1/4” in diameter and 12 1/2” in height.

“The basket collecting activities of dealers and amateurs between the 1860's and the 1920's in California is described. Four phases are defined: initial purchase by dealers of old traditional baskets; production of  baskets in the form of white containers by Indians; height of basket buying “craze”; Indian response to expanded market with new copies of old baskets. Interviews with weavers, comments of collectors, and practices of dealers all indicate that baskets made for sale have different design compositions than those made for Indian use”.

This basket is an impressively-sized, very beautiful, and traditionally-made Washoe bowl in outstanding original condition. It’s hard to do much better than that without spending yourself into a serious coma. There’s an awful lot of Native art, tradition and history encapsulated here in this piece. The next step up if one prefers to go that route, a made-for-commercial-sale “fancy” presentation-style Washoe “Degikup” basket by a prominent named weaver, could easily cost at least two or three or even five times as much and likely be considerably smaller in size and such a piece would, by its very nature, also sacrifice some of the “authenticity” in that it’s more of a made-to-order to satisfy a non-Native consumer market piece than it is a completely traditional and indigenously created piece which also happens to function perfectly as a serious, beautiful and historic objet d’art.