An exceptionally rare and extraordinarily large

This remarkable piece of pottery is a virtual camera lens or time tunnel of sorts through which to view and understand extraordinary historical events. And what mind-boggling events this bowl has been a part of and witness to! Its time frame is the immediate aftermath of The Great Pueblo Revolt of 1680 in which the various Indian Pueblos of New Mexico and the Hopi villages in Arizona rose up in unison and drove the hated Spanish invaders and colonizers out of the region, pushing them out from Santa Fe and northern New Mexico down to the Texas/New Mexico/Mexico border at Ysleta del Sur in Ciudad Juarez. At Hopi, furious villagers who had been forced for years to endure horrific atrocities and oppression set fire to the Mission churches and threw the Spanish priests off the tops of the high mesas. In the immediate aftermath of the revolt, fearful of the many reprisals which were certain to come, and which eventually did, many of these New Mexico Rio Grande Pueblo people fled to the sanctuary of the remote and rugged Gobernador-Largo canyon complex wilderness in Northwestern New Mexico bringing with them their most precious (and most portable) possessions especially their heirloom pottery, jewelry and textiles, basically whatever they could carry on their backs or on their beasts of burden to their new temporary homes in the rugged wilderness. 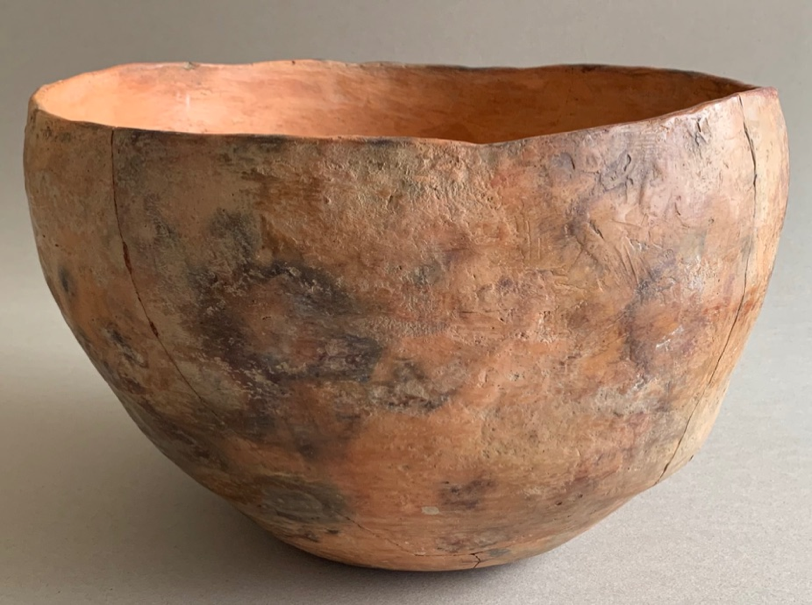 There they were joined from the North by waves of bands of Hopi refugees fleeing from their own separate and intense conflicts with the Spanish both during the Pueblo Revolt itself and afterwards through the subsequent destruction of Awatovi village in 1700. This so-called “Gobernador Phase” of mixed Pueblo and Navajo peoples living together lasted through about 1740-1750. The Gobernador Canyon area during this time period was a vast and trackless wilderness known only to its original inhabitants the Navajo people for whom it was their virtual center of their world, their place of emergence according to Navajo mythology and legend, their original Southwestern homeland known to them as “Dinetah”. The Navajo generally welcomed the Pueblo refugees and intermingled and intermixed with them over the years building and living together in a series of widely scattered and relatively makeshift small stone villages known as “Pueblitos” most of which were just large enough to hold a family or clan group. These Pueblitos were often defensively located and oriented to repel invaders or to make a quick escape if necessary and often included watchtowers to better view potential oncoming enemies.

new place of refuge was the development of a new type of predominantly utilitarian pottery made of the local area clay and made according to the time-honored ancient methods and techniques of the various Pueblo refugees involved; Zuni, Hopi, Zia, Jemez, Santo Domingo, San Felipe, Santa Ana, Cochiti, Tesuque,

San Juan, San Ildefonso etc. as well as the Navajo, but newly adapted by necessity to the only available materials and other requirements of their new place of sanctuary and to a tenuous refugee life. This was the so-called “Gobernador” pottery type, plainware and occasionally polychrome, made of the local area pinkish, orange, tannish colored clay and generally fairly thick-walled and fairly high-fired using wood or animal dung or possibly as in some cases coal as fuel with the vessels characteristically showing

a prominent evidence of fire-clouding. 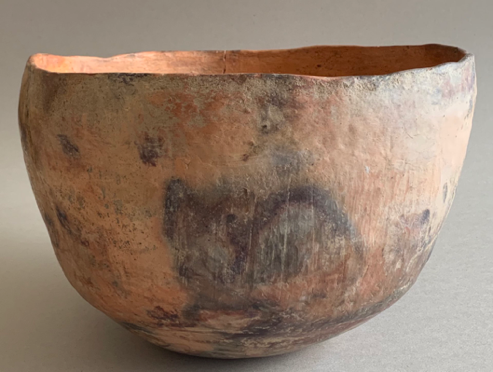 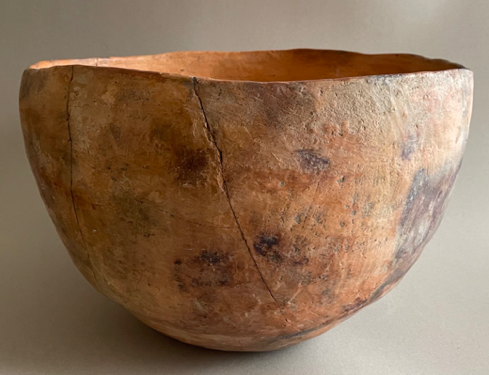 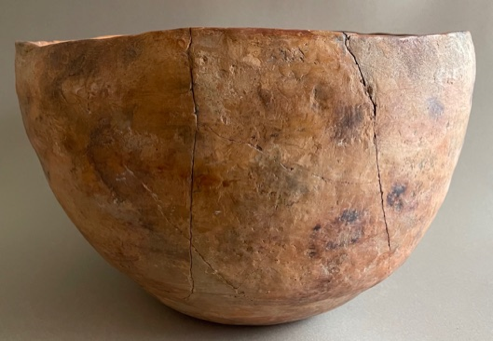 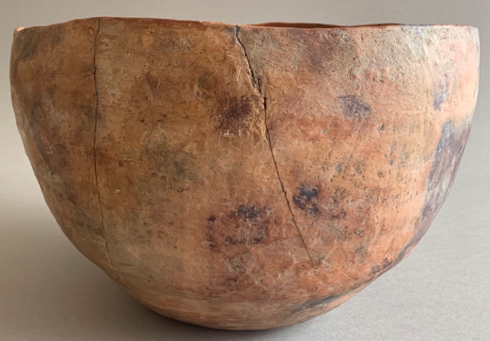 This extremely large deep straight-walled bowl was made using the local Gobernador clay and firing methods by a Hopi potter in the Hopi transitional “San Bernardo/Payupki” pottery style of 1680-1740 A.D and it is a unique and remarkable vessel in every way. First, is its almost unbelievable size considering the time period and the extreme and variable living circumstances under which it was made and used. Of the perhaps twenty or so Gobernador pottery vessels we have seen over the past thirty-five years, this is by far the largest and by a considerable margin. This bowl is an exceptionally massive and fragile vessel for a people essentially living life on the run and this underscores its completely critical functional importance to them. This bowl could essentially hold enough food to feed an entire Pueblito, either in terms of preparing dough for making bread or in use as a cooking bowl in the time-honored ancient Anasazi method of filling the bowl with food such as a stew and setting it next to a fire to cook with indirect heat.

The bowl measures a colossally-sized 17 3/4” in diameter and it is 11 1/4” in height. It is in extremely good condition especially considering its great size and advanced age. The bowl has several large cracks some of which appear to have been filled at an unknown point in time, possibly quite a while ago with an unknown substance which might be pinon pitch mixed with fire ashes, a common method of Historic Pueblo pottery repair to important vessels. This bowl was a very valuable vessel to those who depended on it and there was a great deal of incentive to keep it in the best possible working order. There are also several more recent cracks in one side which have been professionally restored. There is no plaster infill or overpainting in evidence anywhere on the bowl under a thorough examination with Ultraviolet light. The bowl is made in the straight, slightly outwardly flaring wall style typical of Hopi San Bernardo to Payupki transitional-style bowls made between 1680 and 1740. However, it is considerably larger than Hopi bowls generally are reflecting perhaps some influence of previous Rio Grande migration to Payupki village on the Hopi Second Mesa and/or possibly the influence of the Hopi’s new Rio Grande Pueblo neighbors at Gobernador. 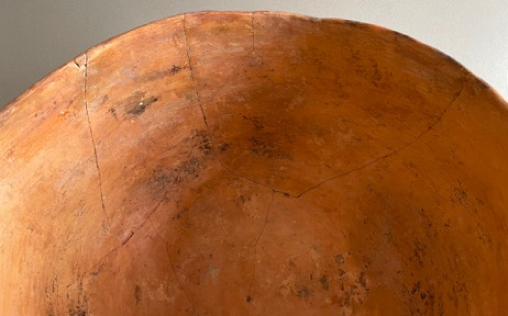 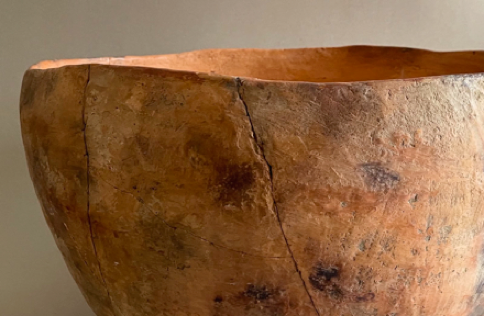 Various Rio Grande Pueblos have a long tradition of making very large dough bowls. The bowl’s rim is very slightly irregular in shape and height and the exterior of the vessel has a multitude of fire clouds most from the original firing process and perhaps additional from some possible later use as a cooking vessel. The beveled and rounded rim of the bowl shows evidence of having originally been painted red and the clay body clearly shows the somewhat coarse ground greyish rock temper characteristic of many Gobernador ceramics. The bowl’s exterior surface is most interesting; it is covered with an orangish clay slip or wash and shows a multitude of original large deep stone polishing strokes in places and smaller numerous parallel polishing lines which might have been done with corncobs as well as a certain degree of later exfoliation and wear from use.

mid-to-late Seventeenth century. Rims of these vessels are typically red, and an orange

firing wash is occasionally applied to the bowl’s exterior. Rounded and beveled rims are common as are rounded and occasionally basket-impressed bases”. 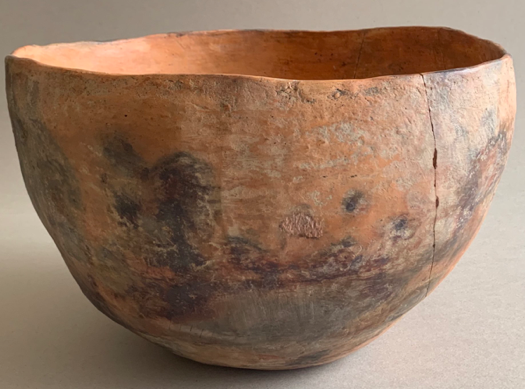 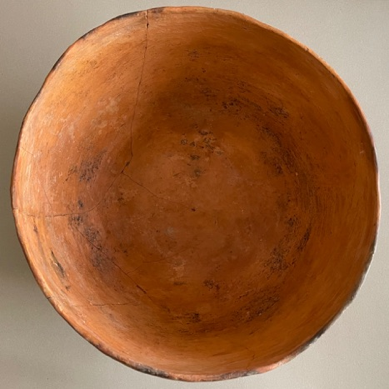 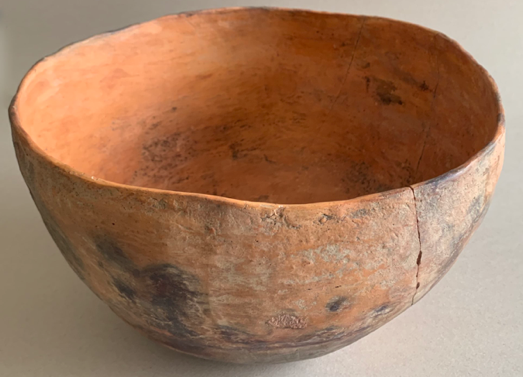 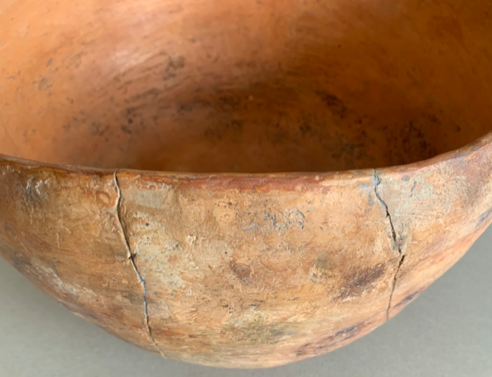 Notably, the bowl also has what is commonly referred to as a “basket start” meaning that its base was initially formed inside a circular basketry tray, most likely Navajo in origin. This can be seen by the indented circular pattern of the basket’s coils and weave impressed into the clay body of the bowl’s bottom and by the slight circular indentation the rim of the basket left on the lower section of the bowl when the height of the clay coils exceeded the height of the basket. Using a base in which to form and build up the bottom beginning of a pottery vessel is a commonplace technique in Pueblo pottery. This device is known as a “Puki” and generally Pukis have been the broken off bottoms of old pottery bowls or jars, but Hopi potters often prefer to use baskets as Pukis and do so regularly and this is another indicator of a Hopi potter having made this bowl. Today, Pukis are still used in the making of Pueblo pottery, but now they are most commonly pieces of commercial china dishware, pie plates or plastic tupperware bowls.

This bowl has a fascinating and excellent provenance befitting its rarity and exalted status as a centuries-old, extraordinary and singular historical object. We originally purchased the bowl in 2001 from our longtime colleague and friend, the distinguished Pueblo pottery authority and scholar, Robert Ashton, Jr. who was a major figure in the Scottsdale Arizona and Santa Fe Indian Arts scenes from the very early 1970’s until his death in 2006. Trained in Anthropology and Archeology, Bob Ashton was one of the most knowledgable people on earth regarding Native American art in general and historic pueblo pottery in particular. In 2003, we sold the bowl to another major Pueblo pottery authority, former museum curator, collector, scholar and prolific author Dwight P. Lanmon. Lanmon’s four important and authoritative volumes co-authored with Francis H. Harlow, on the pottery of Acoma, Santa Ana, Zia and Zuni Pueblos are standard reference works in the field today. Mr. Lanmon kept this bowl in his personal collection for the next fifteen years until selling it in 2018 and we were recently able to acquire it back again.

This remarkable bowl made many decades before The American Declaration of Independence of 1776 is at once a beautiful art object and a unique window into the deep Southwestern past at an incredibly important historic and tumultuous time. It wears its advanced age and the extreme struggles and strife it has lived through exceptionally well, with a considerable degree of dignity, grace and presence. It is a miracle that it and the remarkably resiliant and resourceful people who made and used it have survived to the present day. 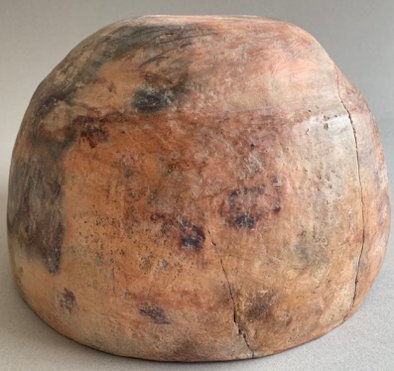 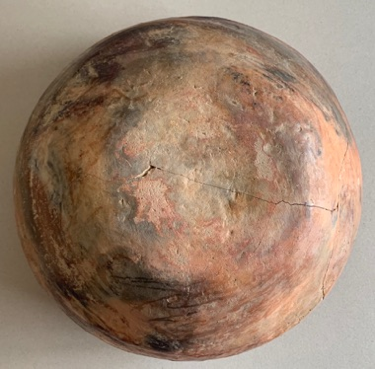 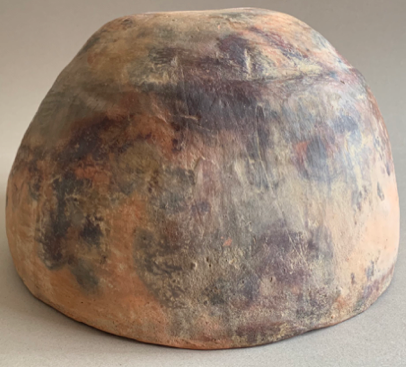 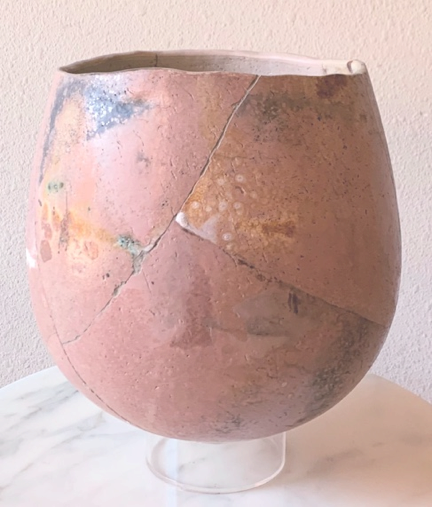 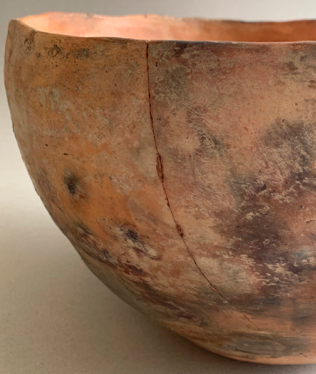 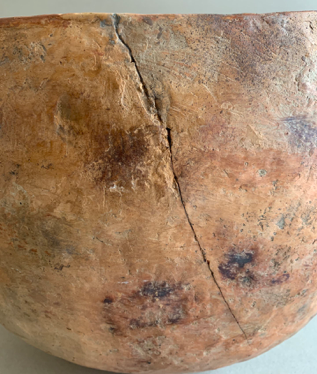 The great New Mexico contemporary potter and Pueblo pottery authority, Rick Dillingham (1952-1994)  was deeply inspired by the various historic Gobernador plain ware and painted ceramics he encountered while working in the restoration lab at The Museum of New Mexico in Albuquerque. You can see here how his own modern pottery work was informed by the shapes, colors and irregularities of these Gobernador ceramics.

Huerferno Mesa at the southern end of the Gobernador-Largo Canyon complex.

“This period, known as the Gobernador Phase, was a time of social turmoil and hostility, beginning with the Pueblo Revolt in 1680. The Revolt broke the Spanish hold on Pueblo villages along the northern Rio Grande and when the Spanish regained control in 1692, most Pueblo groups fled westward to Navajo territory in the Largo-Gobernador area of northern New Mexico. During this period, the Navajo and Pueblo people lived together and probably intermarried. The influence of Pueblo refugees on the Navajo culture is exhibited in the pottery, rock art, and architecture of the region.

By 1715, Ute attacks, encouraged by the Spanish, were threatening the survival of the Navajo and Pueblo people. These conflicts led to increased use of mesa tops, cliff faces, and large boulders as construction sites with most structures defensively positioned for protection from attack. Constructed of unfinished sandstone and mud mortar with earthen roofs and floors, the Pueblitos have expansive views of the surrounding territory, and often maintain a line-of-sight with each other.”