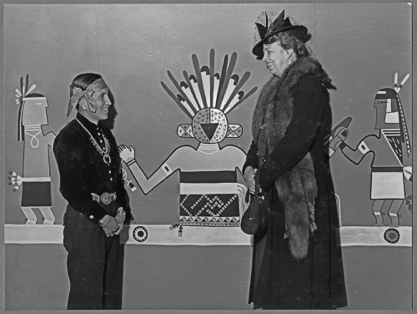 At left, "Mrs. Roosevelt and Fred Kabotie, Hopi painter," standing in front of an Awatovi Kiva Mural reproduction by Fred Kabotie at the Museum of Modern Art, New York exhibition, "Indian Art of the United States", 1941.  At center, Michael Kabotie wearing one of the silver pendant/panels of his "Silver Room of Awatovi" 2001 sculpture seen at right.

Left photo source and © The Museum of Modern Art Archives, New York. IN123.62. Photograph by Albert Fenn. Center and right 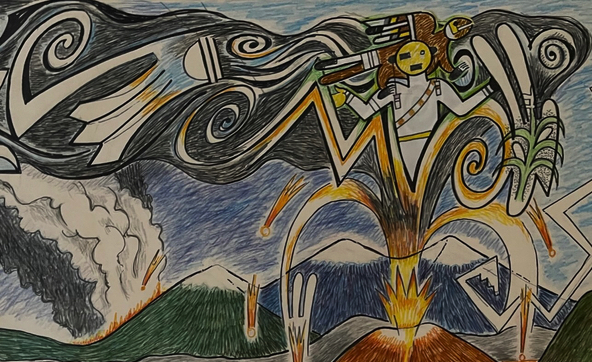 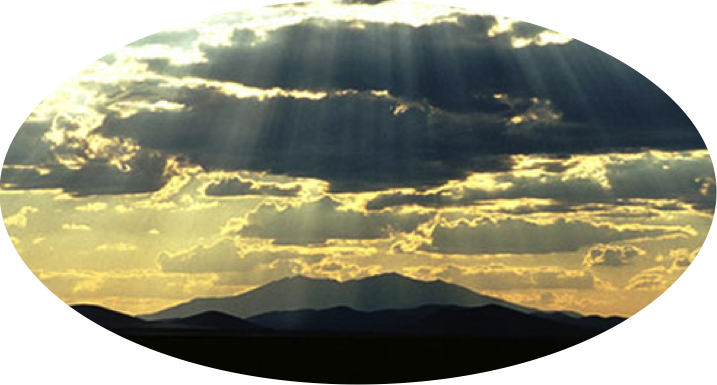 The bracelet measures 1 3/8" in continuous width all the way around. The inner circumference end-to-end is 5 1/4" and the gap between the terminal is 1 3/8" for a total interior circumference of 6 5/8". The bracelet weighs a comfortable and easy to wear 76 grams or 2 5/8 ounces. The bracelet is in remarkable, nearly brand-new original condition. There really isn’t even a scratch on it and it looks essentially for all intents and purposes as if it was never worn. The bracelet is properly signed “Lomawywesa”, Michael Kabotie’s Hopi name, in his customary cursive signature and it is also dated “2005” and marked “Sterling” on the interior.

Since Michael’s untimely death in 2009, the very limited supply of Michael Kabotie jewelry has literally skyrocketed in value. It has almost completely disappeared from the market and on the very rare occasions

when something does become available, you can expect to pay handsomely for it. This bracelet is an excellent opportunity to acquire a particularly beautiful piece of Kabotie’s unparalleled jewelry in outstanding condition

at a cost which is commensurate with his current market but which won’t break the bank.

“We the Hopi have a lot to offer from a spiritual standpoint and as a living force. We are hoping that from the presentation of our traditions and from the interpretation of the Hopi way in our art and paintings a new direction can come for American spirituality.”

This beautiful bracelet is a perfect example, depicting a range of stylized mountains amidst swirling clouds and windstorms, almost certainly the local San Francisco Peaks located exactly in Hopi’s backyard, so to speak, just outside Flagstaff, Arizona. These majestic peaks are central to Hopi mythology and ceremonialism as being the ancestral “Home” of their kachina spirit beings. The Michael Kabotie mural study of A kachina being and its power emerging from its home under the San Francisco Peaks shown below illustrates this interpretation very well. 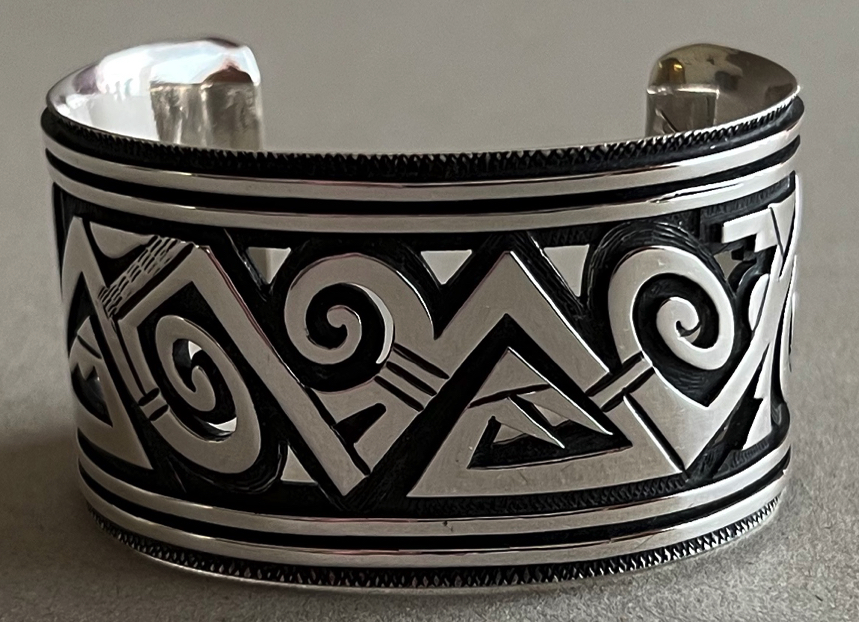 The resounding artistic theme that informed and inspired Michael Kabotie’s art for most of his life and career were the magnificent ancient Hopi painted Kiva murals discovered in the 1930’s at the ancient ruined Hopi villages of Awatovi and Kawaika-a on Antelope Mesa on the far eastern edge of the Hopi Reservation. Fred Kabotie assisted the 1935-39 Harvard University Peabody Museum archaeological expedition that discovered and excavated these magnificent murals and he interpreted and presented them in a set of original paintings done for The Golden Gate Exposition in San Francisco in1939 where he was assisted by the young Hopi artist Charles Loloma.

These mural paintings are now held in the permanent collection of The Denver Art Museum. Young Michael Kabotie was completely entranced by the awesome beauty, imagery, majesty and meaning of these sacred Kiva paintings and he subsequently interpreted and reinterpreted them in various ways and forms throughout his life in his own paintings and drawings and particularly in his spectacular jewelry pieces. 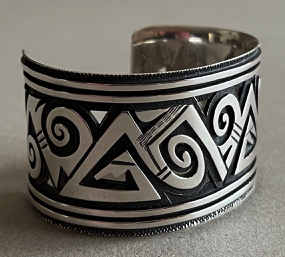 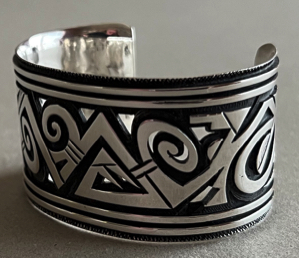 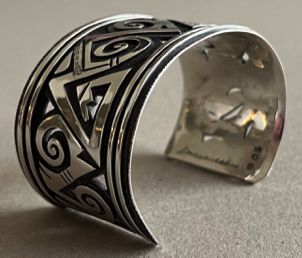 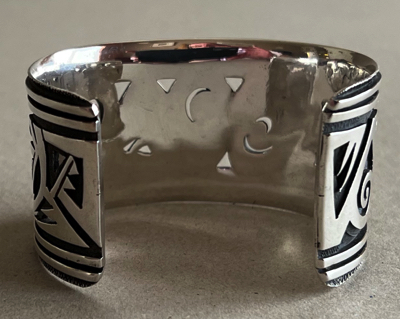 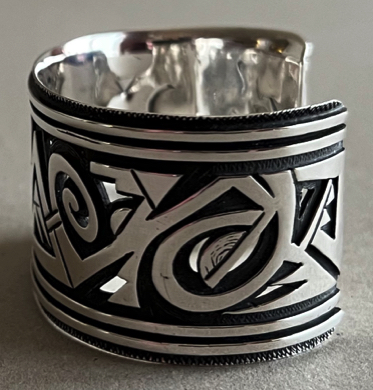 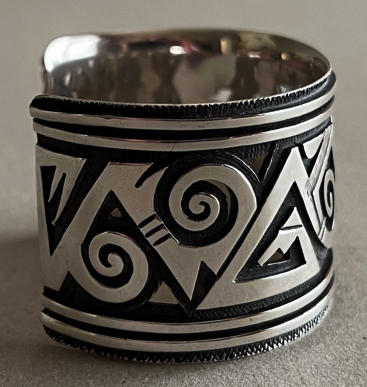 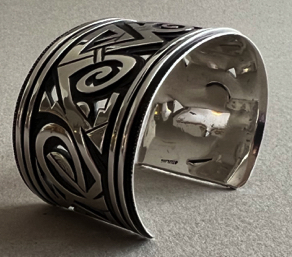 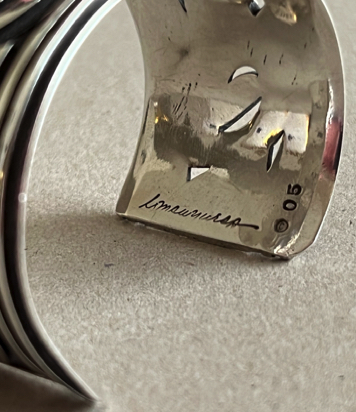 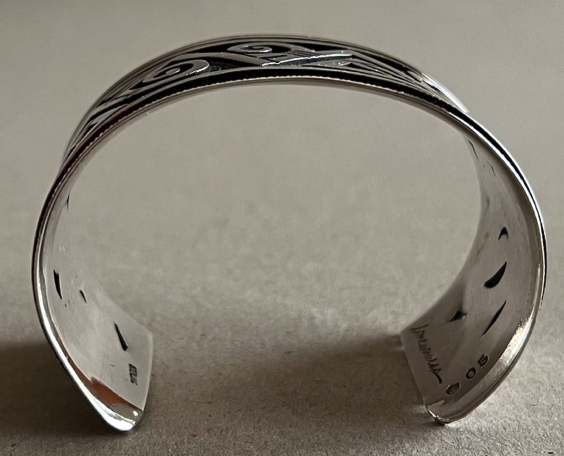 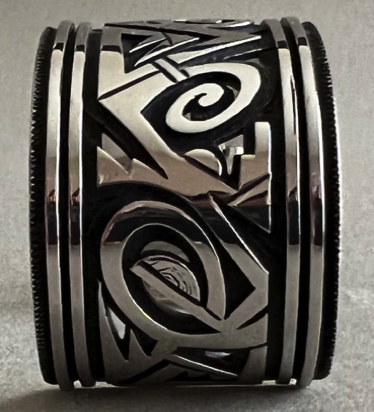 Some of the most in-demand Native American art in existence today is Michael Kabotie’s (1942-2009) extraordinary Hopi silver overlay jewelry which is coveted and sought after worldwide today for its unique and distinctive beauty and artistic expressiveness.

Michael Kabotie grew up in one of the most inspiring artistic environments imaginable. His Father, Fred Kabotie (1900-1986), was one of the most significant Hopi artists and educators of the modern era and the important Co-Founder of The Hopi Arts and Crafts Guild. In that role, along with his colleague, jeweler Paul Saufkie, he established the enduring tradition of Hopi silver overlay jewelry which would later become one of his son Michael’s primary artistic vehicles.

The unique “triple-overlay” style, which Michael originally developed, allowed him to achieve a far greater sense of depth, detail and precision in his jewelry than is possible in conventional Hopi silver overlay. Through the judicious application of stampwork, chisel work, shading and/or etching on the top layer of silver and the strategic use of cut-out panels the piece acquires a marvelous, sculptural quality and vividness of design, almost like a hand-carved sculptural painting, if you will, rendered in three dimensions.

The San Francisco Peaks as seen from the Hopi mesas. 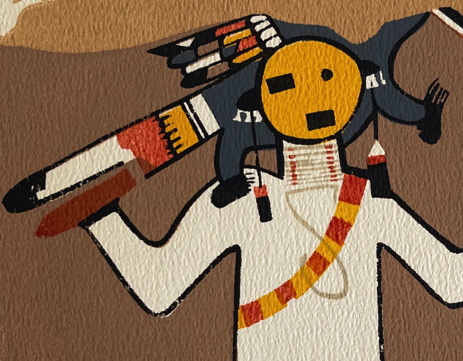