a chance to see one this good outside of a museum display case, let alone one that they might actually be able to buy.

This bracelet was made by a seriously capable Navajo silversmith, most likely an older man well trained in Classic Period techniques and sensibility. It’s got all the necessary old historic goodies starting with a beautifully hand-wrought coin-silver carinated shank. We’re not completely sure if this shank was cast from melted down coins or if it was hammered together from the actual coins themselves in the ancient technique known as “Mokume-Gane” from the manner in which Japanese swordsmiths hammered out the blades for Samurai swords. We kind of think the latter, but either way, the shank is beautifully hand-formed with wonderful various tooling marks and annealing marks.

And now for the real serious eye candy, the three perfectly matched hand-cut cabochons of jet-powered blue Lone Mountain Nevada spiderweb turquoise, one of the world’s most cherished and highly valued turquoise varieties, retailing today at well over $100 per carat on the increasingly rare occasions when you can find it. The Lone Mountain mine, in Esmerelda County, Nevada which was originally called the Blue Jay Mine, is one of America’s oldest turquoise mines. Turquoise was found there in the early 1910’s and mining began in earnest in the mid-to-late 1920’s when the first spiderweb stones were found there. 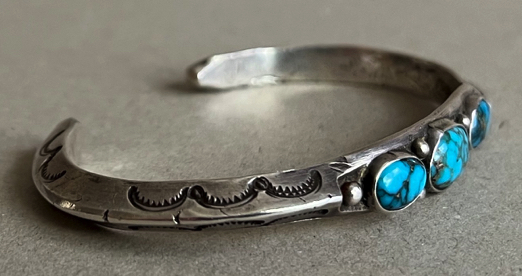 bracelet’s shank and they are nicely accentuated with applied silver “raindrops” of which there were originally six and there are now five. Extending outwards down the shank from the stones central panel are four panels of very beautifully applied simple crescent-shaped stampwork designs. The bracelet is 3/8” in width at its widest center point. The inner circumference end-to-end is 6 1/8” and the gap between the terminals is 1 1/4” for a total interior circumference of 7 3/8”. The bracelet weighs a totally comfortable and easily wearable 31 grams or 1 1/8 ounces. It is in excellent original condition with nearly a century or so of age-appropriate wear and a fine patina. It looks its age and wears it very well.

Impress your friends and depress all your detractors because you got this rare and beautiful baby and they didn’t. 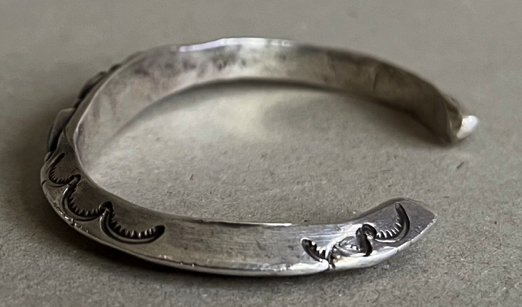 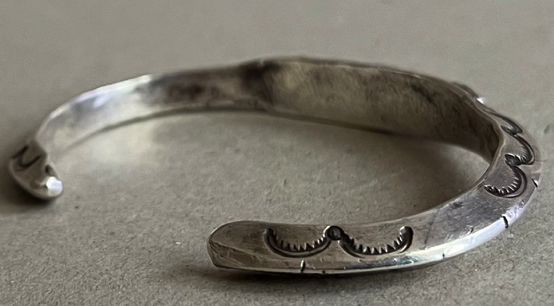 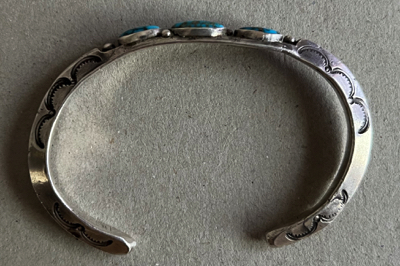 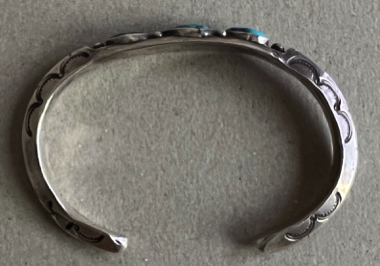 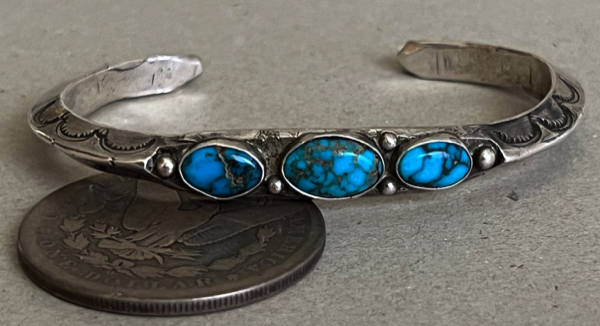 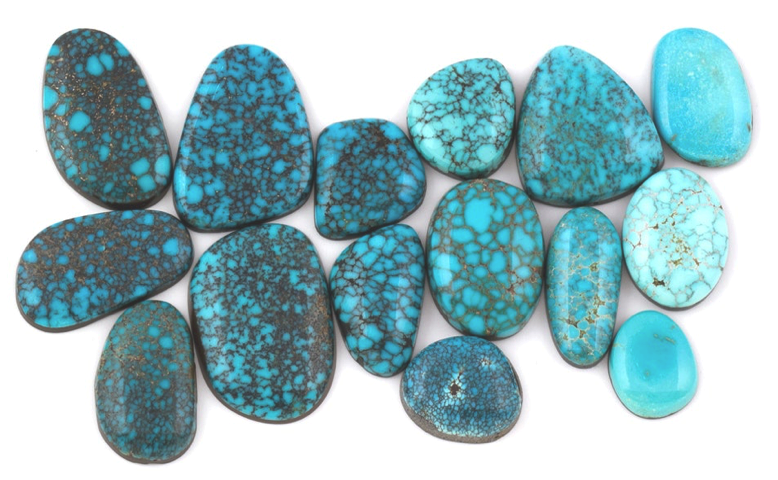 This mine once produced a great variety of turquoise, included some of the finest examples of spider web turquoise as well as clear, deep-blue stones. Lone Mountain turquoise has always been noted for holding its color. Among all “classic” Southwestern turquoise, only Lander Blue is more valuable. A rare occurrence has been the “fossil turquoise” found in this mine. The fossil is of a crinoid stem. The Lone Mountain mine consists of a series of haphazard tunnels dug by miners chasing the veins of turquoise. The mine was claimed by Lee Hand in 1920 first as the Blue Jay Mining Lode and later, after seeing that so many mines had been named Blue Jay, Hand changed the mine’s name to Lone Mountain.

In the 1960’s Lone Mountain was converted to a small open pit operations by Menliss Winfield. It continues to be mined in this fashion today. In 1979, I purchased Lone Mountain with the King family of Austin, Texas and Santa Fe, New Mexico. I have had different partners over the years and the property has only been mined 6 over the last 28 years. The reason for this is the expense of mining and the regulations for small mine owners, makes it very difficult to be profitable. But with the value of the classic American turquoise mines being so great, it is feasible for this great mine to once again be of great value.

The bracelet weighs just a few grams more than one historic American silver dollar. The bracelet could very easily have been made from a silver dollar like this one, either melted and cast or just heated to red-hot and hammered out to form the bracelet which we think is more likely the case here.