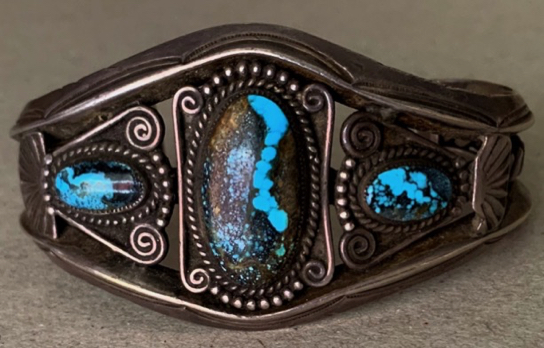 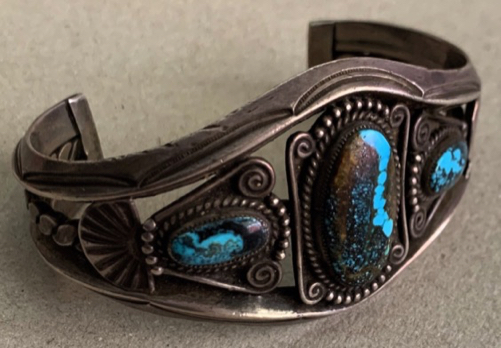 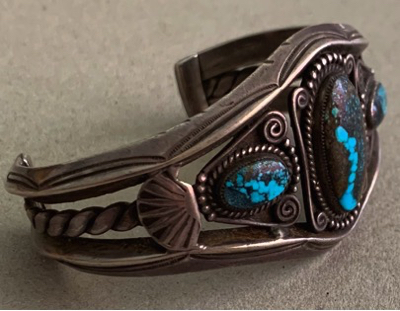 This is an unusually attractive bracelet in that the three turquoise stones in it are simply out-of-this-world phenomenal, completely unique in our experience. We suspect that this special piece was made to order by an unknown Navajo or Pueblo silversmith or trading post for the person who found or later acquired these stones. It likely could have been a turquoise miner or mine owner or friend or family member of one of these.

In the close-knit community of Nevada turquoise miners and mine owners in the second half of the Twentieth Century, there were intrepid individuals such as the Edgar brothers, Cutler and J.W., who always sought out unique and unusual stones and who would go to great lengths to get them often paying very handsomely for them. Also, there were dynamic and ambitious Indian Traders such as the great C.G. Wallace at Zuni Pueblo in New Mexico who literally left no stone unturned in their quest to acquire the finest and most unique turquoise and other stones for their silversmiths to set into jewelry for their discerning high-end clienteles.

“For a number of decades the Edgars were the kings of turquoise in the world.  They owned and operated over forty of their own mines plus a substantial number of digs in Eureka, Elko and Lander counties in Northern Nevada. Ranchers, farmers, precious metals miners and people in the outback of Northern Nevada knew that if they ran across turquoise that they could probably interest the Edgars in it.”

The three matched turquoise cabochon stones in this bracelet all have distinct similarities to stones from the two most famous and expensive turquoise mines in the world; primarily to the old Lander Blue Mine in Lander County, Nevada which was officially discovered in 1973 and secondly to the much older Lone Mountain Mine in nearby Esmerelda County, Nevada which was first discovered in 1920 and originally named the Blue Jay Mine. 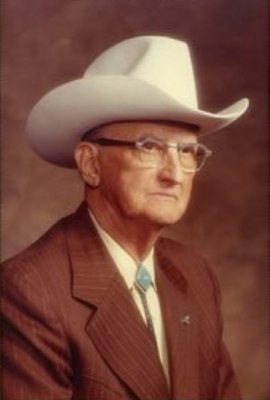 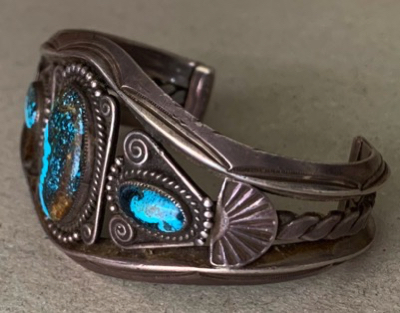 “It was known from the beginning by all miners that the place to sell all their big turquoise was C.G. Wallace’s.”

The tight intensely-deep blue spiderweb matrix particularly in the bracelet’s center stone is strongly indicative of the old Lander Blue mine as is the dark brown/grey background matrix. What is unusual for Landers is the irregular streak of clear blue running down the center of the stone. But this phenomenon did occur there as can be seen in the photo below picturing an old Lander Blue stone from the Edgar Family Collection. The presence of a clear colored streak in an otherwise matrixed turquoise stone is often called “Boulder” or “Ribbon” turquoise and it occurs with some regularity in various different mines. Notably, there is a variety of stone from the famed Lone Mountain Mine which is of a clear sky blue color and also Lone Mountain spiderweb matrix and background can also be similar to what we see here in these stones.

So there is a bit of a mystery regarding these fantastic stones. One final thing to keep in mind when discussing the stones in this bracelet is that the Lander Blue Mine was not officially claimed until 1973 which does not mean that nuggets of Landers could have been found on the ground in the area of the deposit prior to the filing of the claim or very soon thereafter. The bracelet’s center turquoise stone measures 1” in length by 5/8” in width and the two side stones measure 1/2” in length by 1/4” in width. The stones are all in very good condition. The center stone has a very slight, but stable crack in the center.

Now let’s briefly discuss the fine vintage Navajo or Pueblo silver bracelet the stones are set into. The bracelet has an interesting construction with what appear to be two large tufa-cast triangular silver wires forming either side of the shank which are capped at the terminal ends. These wires are beautifully stamped all along their length with lovely crescent shaped designs. Running down the bracelet’s center is a flattened twisted silver wire support piece which holds the three bezel platforms for the stones and the two silver stampworked panels which nicely flank and accentuate the stones on both sides. The silver bezels of the stones are especially interesting, with finely serrated silver bezels and twisted silver wire surrounds and lovely and very elaborately detailed silver wire scrollwork and numerous applied small silver “raindrops”.

These extremely elaborately and highly detailed fancy settings serve to even further highlight the unique and special beauty of these unusual turquoise stones. Someone really cared about calling attention to these stones and they succeeded admirably. Interestingly, this is sort of a forerunner if you will of some of the very elaborate scrollwork decorative designs that would be done decades later beginning in the 1990’s by the outstanding young Navajo silversmith, Perry Shorty. 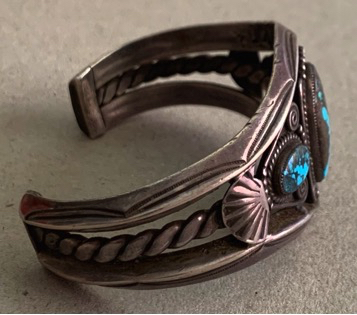 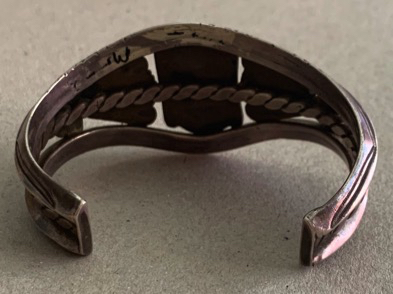 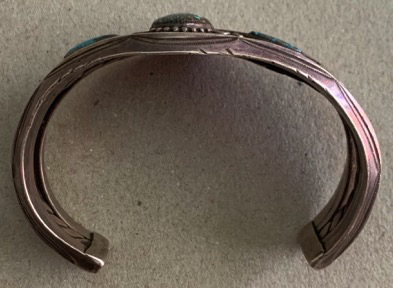 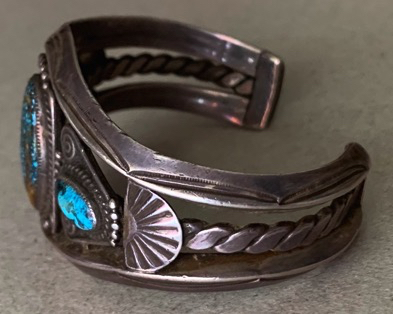 The fancy delicate nature and admirable fineness of this twisted wire decorative scrollwork could point to the bracelet as possibly having a Pueblo origin, particularly Zuni Pueblo which would again lead us back to the possibility of C.G. Wallace’s involvement. The bracelet measures 1 1/2” at its widest center point and it tapers down to 5/8” in width at the terminal ends. The inner circumference end-to-end is 5 3/4” and the gap between the terminals is 1 5/8” for a total interior circumference of 7 3/8”. The bracelet measures 2 5/8” across from inside edge to edge at its widest point. The bracelet weighs 76 grams or 2 3/4 ounces.

The bracelet is in very good vintage condition overall. The silver shank is slightly out of round which leads us to believe that it might have been opened up a bit sometime in the past by a previous owner. This is not a serious issue and it does not really effect the bracelet’s wearability or appearance, but it could be closed up if desired by a qualified professional jeweler. At the end of the day what we have here is a very beautiful and compelling mystery indeed. Beautiful. Compelling. Mysterious. What more can you ask or expect from a piece of jewelry? 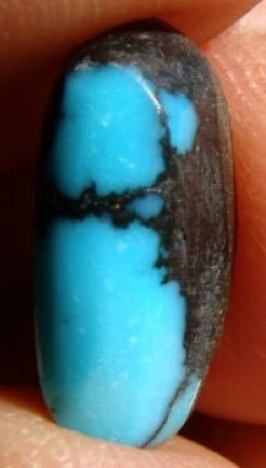 A piece of old Lander Blue “ribbbon” turquoise from

the private family collection of Cutler and J.W. Edgar.

Rita J. Hapgood, a blackjack dealer at the Nevada Club at Battle Mountain discovered this turquoise deposit in 1973 while picnicking at Indian Creek. Later that year, she sold her claim to Marvin Syme and Henry Dorian, who formed the Lander Blue Turquoise Corporation. Lander Blue is almost entirely spider-webbed turquoise with colors from medium to deep blue and a black contrasting matrix.

Although some other grades were found, only 90 to 110 pounds of the beautiful spider-web turquoise was mined. Lander Blue was a “Hat Mine,” so called because you could cover it with a hat. Today, this is the rarest of all Southwestern turquoise “classics” is also of the highest grade and thus pound for pound, the most valuable turquoise in the world.

This mine once produced a great variety of turquoise, included some of the finest examples of spider web turquoise as well as clear, deep-blue stones. Lone Mountain turquoise has always been noted for holding its color. Among all “classic” Southwestern turquoise, only Lander Blue is more valuable. A rare occurrence has been the “fossil turquoise” found in this mine. The fossil is of a crinoid stem. The Lone Mountain mine consists of a series of haphazard tunnels dug by miners chasing the veins of turquoise. The mine was claimed by Lee Hand in 1920 first as the Blue Jay Mining Lode and later, after seeing that so many mines had been named Blue Jay, Hand changed the mine’s name to Lone Mountain.

In the 1960’s Lone Mountain was converted to a small open pit operations by Menliss Winfield. It continues to be mined in this fashion today. In 1979, I purchased Lone Mountain with the King family of Austin, Texas and Santa Fe, New Mexico. I have had different partners over the years and the property has only been mined 6 over the last 28 years. The reason for this is the expense of mining and the regulations for small mine owners, makes it very difficult to be profitable. But with the value of the classic American turquoise mines being so great, it is feasible for this great mine to once again be of great value. 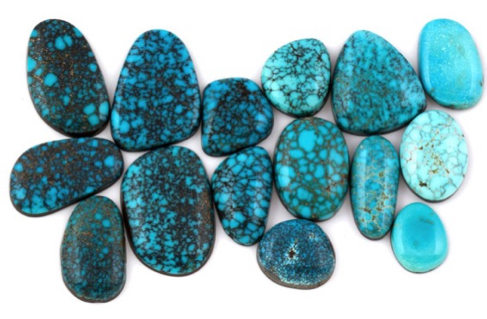 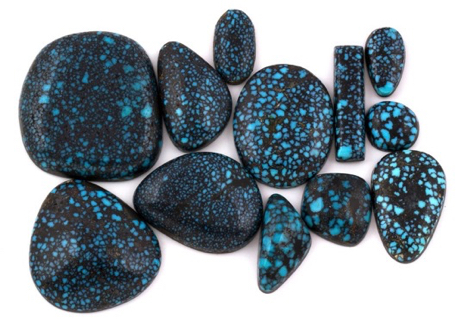 “You have to respect the stone...