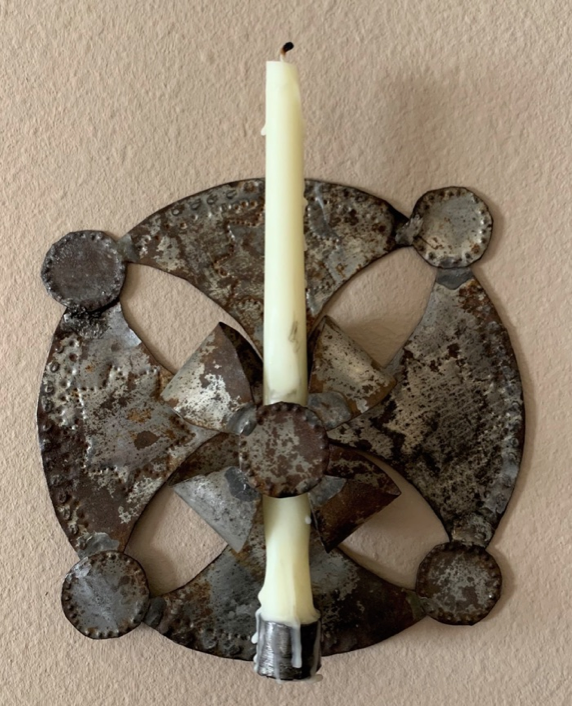 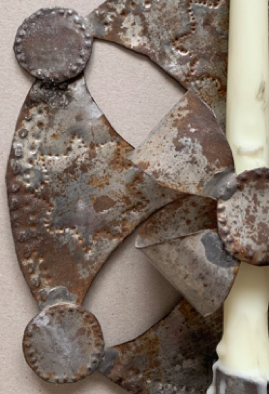 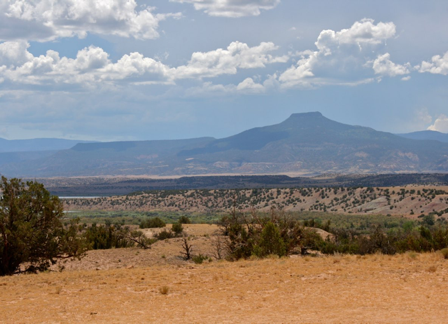 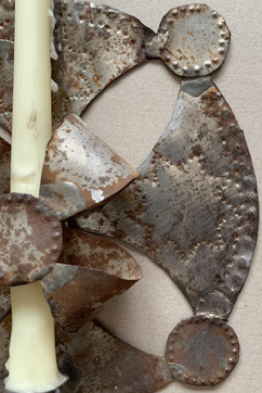 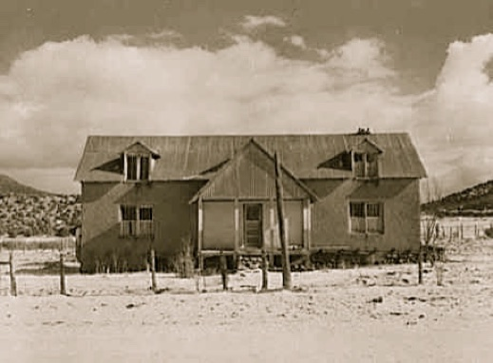 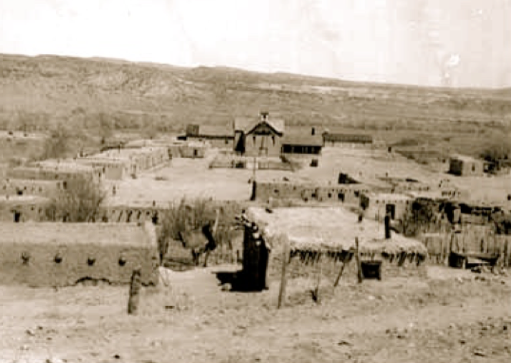 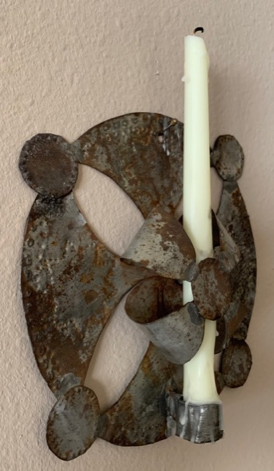 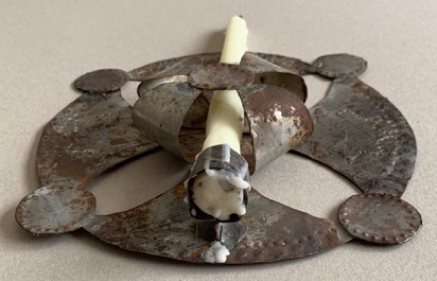 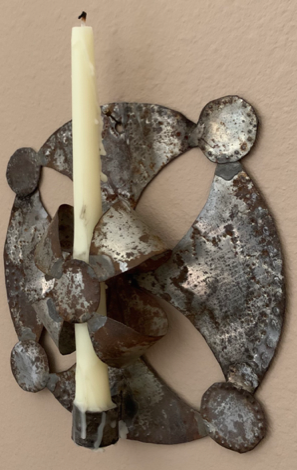 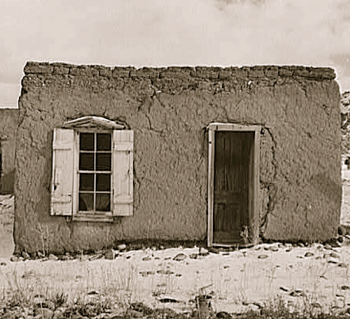 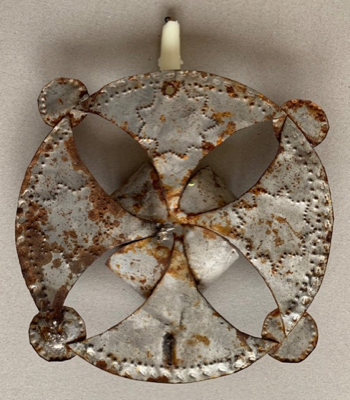 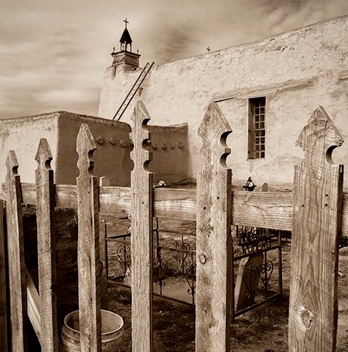 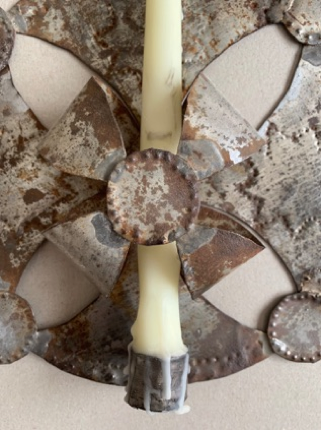 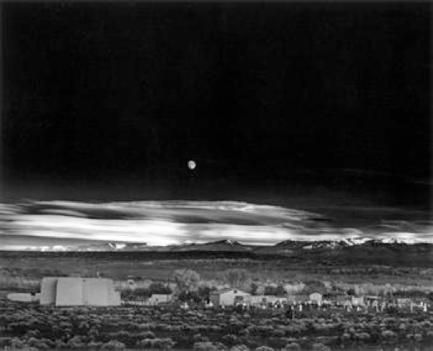 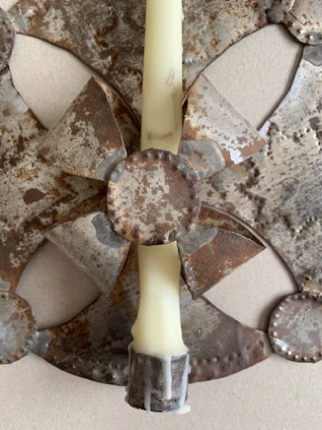 When your wife asked you to “Please turn on the light, honey” in Santa Fe in1879, this is what she meant.

This is old-style Nuevo Mexico, when living in “Santa Fe style” meant your floors were dirt, your walls were mud and straw, your water came from a well, your heating system was a fireplace, your plumbing was outside and your light bulbs were all made of wax.

functional workhorse object is a testament to the great artistry and skill of its anonymous “hojatalero” or tinsmith. New Mexico tinwork is an indigenous folk art miracle of sorts, the creation of an entire range of beautifully artistic and often highly functional objects made out of essentially other people’s garbage. Using

There were a number of different tin workshops or individual artists making New Mexico tin works in the last quarter of the 19th Century; one of the most significant of which was the Rio Arriba tin workshop centered in

The Espanola Valley in Rio Arriba County just north of Santa Fe. “Rio Arriba”, which translates to “the upper river”, is a vast and largely mountainous area which encompasses some of the smallest, most remote, rural and oldest Hispanic villages in New Mexico; places like Las Trampas, Truchas, Cordova, Chimayo, Hernandez, Abiquiu, Coyote and Tierra Amarilla. This candle sconce has many of the defining characteristics of the Rio Arriba Workshop’s fine tinwork; single-dot stamping, completely unpainted tin surface, use of small multi-pointed star punched decorations and scalloped leaf forms and floral rosettes as design elements.

Cerro Pedernal rises above the rugged, remote landscape of Rio Arriba County near the tiny villages of Coyote and Abiquiu.

Photo source and © Palace of the Governors Archives

produced in northern New Mexico in the last quarter of the nineteenth century.”

The round body of the sconce is formed in a beautiful four-part design scheme with four oval-shaped diagonally-oriented cut outs, four small circular tin rondels and four stamped or punched in Vallero-type eight or ten pointed star designs. In the center of the sconce is a cruciform four-part, floral rosette design composed of four tin strips which have been ingeniously cut out of the body of the sconce and peeled or folded forward to form a tin “flower” anchored and secured in the center by a tin rondel. It’s a sensuous and sophisticated sculptural shape and an interesting method of wrapping the tin body of the sconce literally around the candle to “frame” it most attractively. At the bottom of the sconce is the tin cup-like piece which actually holds the candlestick in place. This holder has an open bottom which means that wax would most likely drip off the candle if the sconce was actually used as a candle sconce. Of course, dripping wax on a dirt floor in the 1880’s was hardly the aesthetic household concern it might be on your white Berber carpet or fine hardwood floors today so if you actually intend to use the sconce as a candle sconce you might want to put something down under it to catch the dripping wax.

The sconce measures 7 3/4” in diameter and 1 1/2” in depth and it is in excellent original condition particularly considering its 140 or so years of age and the extreme living conditions in the particular places where it likely spent most of its existence. It has some amount of oxidization or rust on the front and back. In our opinion, this is precisely how you want a piece of this time and place and era to look, it needs to have a certain amount of authentic old New Mexico “funk” and patina to it, any cleaner would not really be appropriate.

This sconce is a beautiful and purely historic New Mexico art object to contemplate on the wall and if you want to light up your life in the finest old rustic Santa Fe style, it’s always ready to do that for you too.