Roger Skeet, Jr. (B.1933) learned to make silver literally at his Father’s knee. His father, the renowned silversmith, Roger Skeet, Sr. was one of the famed Indian trader, C.G. Wallace’s primary in-house Navajo silversmiths along with such other accomplished luminaries as Austin Wilson and Ambrose Roanhorse. Skeet Sr. worked for Wallace at his landmark trading post at the Zuni Pueblo in far Western New Mexico for approximately 30 years from the late 1920’s until his death in 1959.

Roger Skeet, Jr. was born in 1933 and he began making silver alongside his Father in Wallace’s trading post as an

eight year-old boy. The silverwork of both the Skeets is quite similar, clean-lined and very traditionally-crafted but with a distinctly modern sensibility and always extremely fine detailing. Roger Skeet, Sr. never signed his pieces while Roger Skeet, Jr. used a simple hallmark of his capital letter initials “RS”.

The artistic imagination and technical skill displayed in this beautiful cast ingot-silver bangle bracelet are quite remarkable; a double two-part design field of half alternating square-shaped chiseled and filed panels and half diamond-shaped designs meeting in the middle of the bracelet and are repeated not only along the center of the bracelet’s shank but on its top and bottom surfaces as well giving the piece a unique and distinctively modern geometric look, or as our Art Director puts it, "a trippy optical piece." In another interesting and particularly attractive touch, Skeet slightly flattened out the bracelet’s profile at the terminals by splaying them out and further accenting them by applying some elegant stampwork designs. 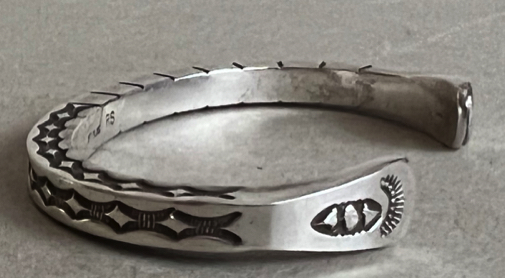 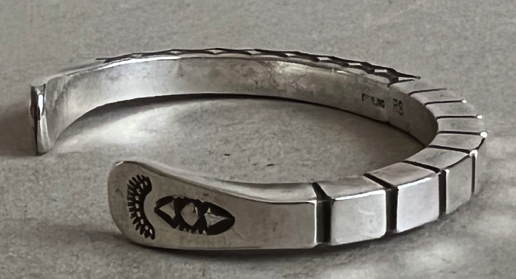 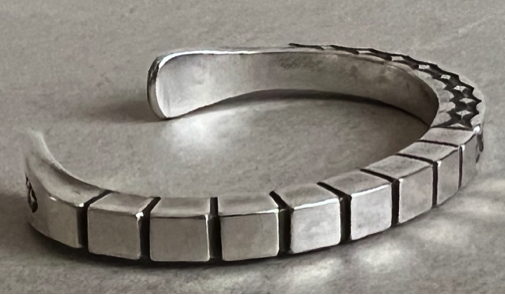 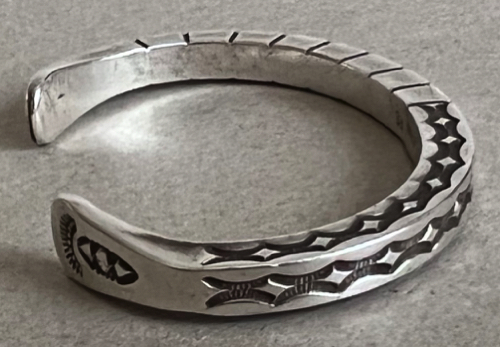 The bracelet measures 1/4” in width most of the way around, widening slightly to 3/8” in width at the flattened terminal ends. The inner circumference end-to-end is 5 5/16“ and the gap between the terminals is 1 3/16” for a total interior circumference of 6 1/2”. The bracelet’s shank rises 1/4” in height above the wrist.

The bracelet weighs a substantial-for-its-slim-width yet extremely comfortable 43 grams or 1 1/2 ounces. It is in excellent original condition and is properly marked with Roger Skeet, Jr.’s “RS” hallmark on the interior and also marked “Sterling”. This marvelous and striking bracelet by one of the Southwest’s most accomplished Native American jewelry artists is extremely easy and satisfying to wear and looks just wonderful in any situation. Wear it on its own

or stack it along with several other bangles, It’s a great-looking simply can’t lose piece!