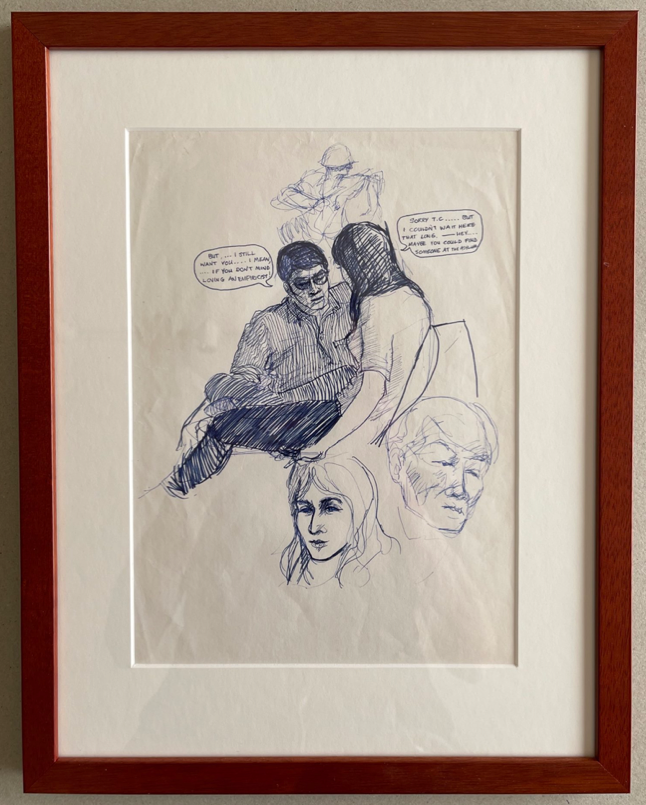 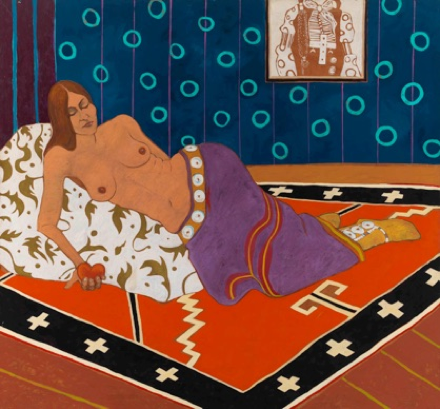 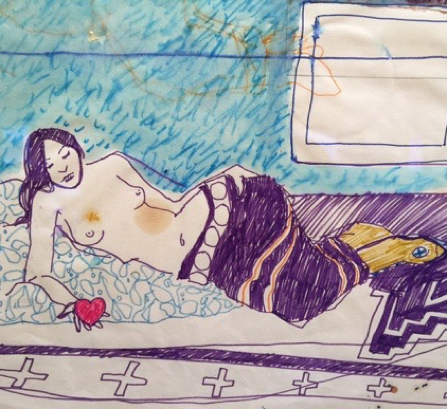 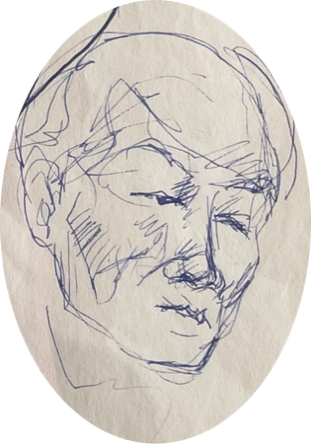 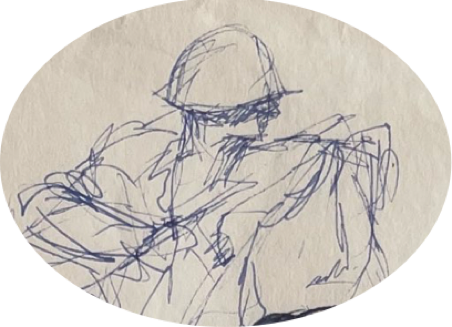 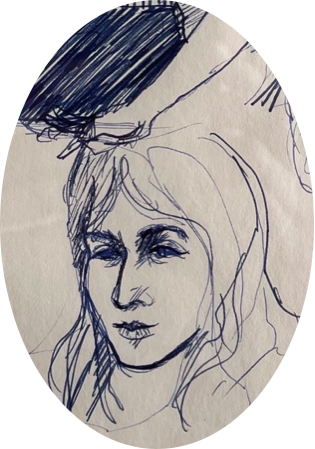 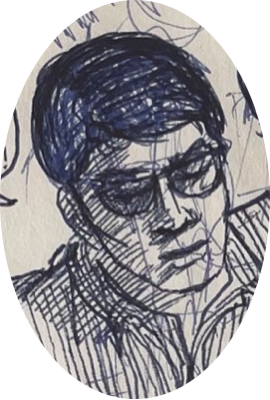 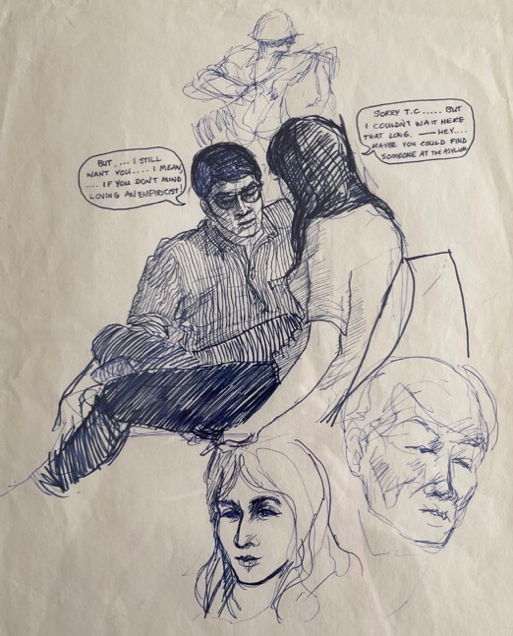 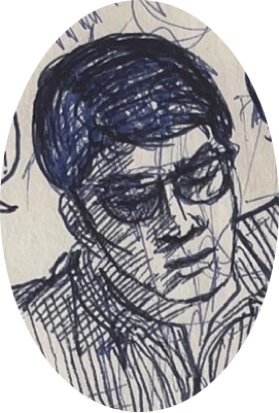 Tee Cee can’t quite seem to win over the girl in this interesting scene try as he might, and this ink-on-paper drawing, a page from a personal visual diary of sorts, is a fabulous and intimate look inside his head. In 1972, around when this drawing was done, T.C. Cannon (1946-1978) was one of the red hottest artists in America; having at the tender age of 26 a landmark two-man show with his Santa Fe teacher and friend Fritz Scholder at The Smithsonian Institution’s National Collection of Fine Arts in Washington, DC. Entitled “Two American Painters”, this seminal exhibition completely shattered all pre-existing visual stereotypes about Native Americans, creating an exploration in irony and contemporary kitsch and culture which opened up a whole new phase and dialogue of contemporary Native American art.

The self-portrait likeness of Cannon in the drawing is remarkably well-done and precisely detailed; it looks

and feels just like him. Is the unseen woman he is talking to in this drawing the elusive and mysterious lady “Elizabeth” with whom Cannon was passionately in love and who after a short and tempestuous relationship

left him never to return? To view a preliminary study of Cannon’s now-famous 1974 painting of Elizabeth, “Collector #3” which is available on our website please click here.

In her definitive biography of the artist, “T. C. Cannon He Stood in the Sun”, Northland Publishing, 1995, T.C. Cannon authority and author, Joan Frederick quotes T.C.’s friend Mike Lord on the subject of the “shadowy” Elizabeth as follows on page 67:

“T.C. and Elizabeth came that summer and spent about two or three weeks with us, and they had several violent arguments during the time that they stayed with us. It was really kind of a tumultuous thing, and then they left and we never saw her again. He told me afterward that she was the one he really wished he hadn’t driven off and that he HAD lost for whatever reason. All I remember is that she was a white gal, she had dark brown hair and her name was Elizabeth, but I can’t tell you anything else abut her, but she was neat. She was a nice person. I don’t think she was an artist, just a person. She’s very shadowy.”

There are also three other figures pictured in the drawing, the somewhat sketchy figure at top is likely a remembered depiction of Cannon himself as a fighting soldier in the Vietnam War from where he had recently returned, the two other faces are unknown to us, but they are rendered so clearly as to certainly be identifiable as specific individuals. The woman’s face could possibly be the same dark-haired woman Cannon is talking to in the main part of the drawing and the face does bear some resemblance to that of Elizabeth in both the study and the painting of “Collector #3”.

The matted dimensions of the drawing are 11 1/2” in height and 8 1/4” in width.  It is in very good original condition with a few wrinkles. The drawing is very finely and archivally matted and beautifully framed under “TruVue” museum conservation UV-resistant glass in a beautiful custom made wood frame which appears to be redwood. The framed dimensions are 16 1/2” in height by 13 1/4” in width.

This piece has a very fine provenance; we acquired it from the renowned Santa Fe Navajo artist, Tony Abeyta, who acquired it directly from T.C. Cannon’s sister and official estate executor, Joyce Cannon-Yi. For the past seven years it has been in the personal collection of a prominent Native American arts collector.

We originally sold this drawing along with one other T.C. Cannon drawing to this collector in 2014 and later after his death we acquired the drawings back from his estate. This drawing is both a fascinating, artistic and important historic document; it’s a beautifully captured rare and intimate look into the life of a distinguished and brilliant Native American artist, like a finely illustrated page from his intensely personal life’s journal.

We asked the distinguished Native American painting and pottery scholar, Edwin L. Wade, Ph.D., to make a few observations on this drawing and here is what he had to say. The original signed copy of these remarks on his letterhead will be included with the sale of the drawing.

“Leonardo da Vinci once said that, ‘ Every artist paints himself ‘, and that certainly applied to the celebrated Kiowa artist T.C. Cannon. Depending on an artist’s skill, temperament, experiences, degree of introspection, and other characteristics, his or her self-portrait can reflect a range of visual information, from a simple likeness to an expression of profound personal awareness of ego and vision amidst insecurities.

In the hands of a unique talent, a portrait of the soul is rendered, and no one was more intimately revealing in this way than T.C. Cannon. His poignant pencil and ink drawings form a virtual diary of a life lived fully, with subscripts of love, lust, vanity, lostness, doubt, and dread. A few of us were fortunate to know T.C. as a friend, but through his visual autobiography that grace continues to be offered to the world.”