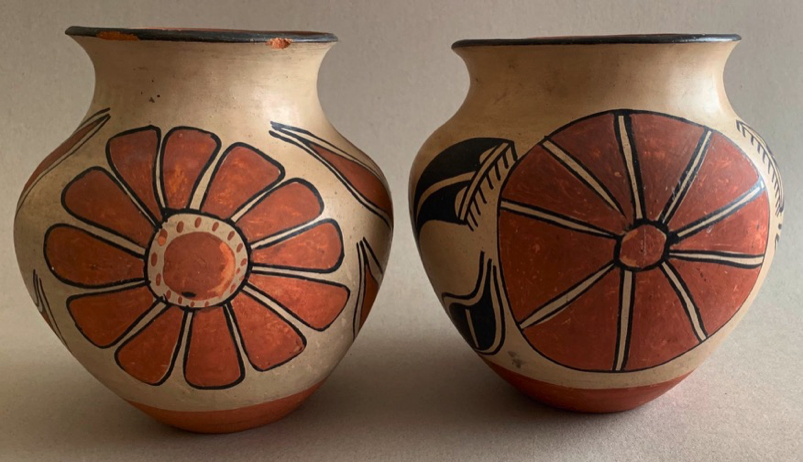 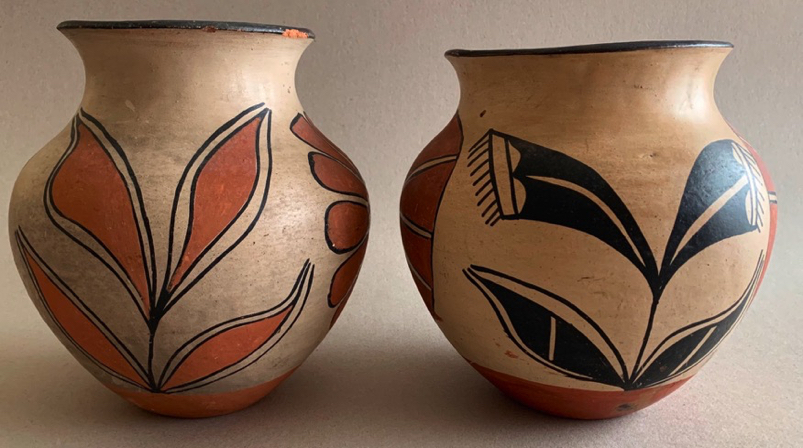 These very interesting and attractive jars could almost have been made as a pair, they have very similar design layouts and similar zoning and very similar sizes, but distinct differences in the presentation of the flower designs and the leaves in one jar are black while those on the other are red with black outlining.

These pieces are fairly typical of some of the fine early 20th Century pottery which was made at Santo Domingo Pueblo in New Mexico and is sometimes referred to as “Aguilar style” pottery after the sisters Felipita and Asuncion Aguilar who initiated the style at the request of Indian Trading Post owner, Julius Seligman. We are not certain that these two jars are specifically by either of these sisters, but they bear certain stylistic similarities to their work. No matter who made them, these are very attractive and visually striking jars with beautiful and somewhat folky decorative designs. Jars such as these were primarily made to be sold at the now historic local Indian trading posts throughout the Santa Fe and Albuquerque region such as those operated by Julius Gans, Jake Gold, the Seligman family, Maisel’s and the famed Fred Harvey Company.

These pieces were often of a relatively smaller size and thus were more easily transportable by traveling purchasers returning home from Albuquerque to the East or West on the Santa Fe Railway. The painted floral designs on both of these jars are a bit looser and more freeform overall than the tighter, mostly geometric designs on many Aguilar sister jars which may indicate a different potter or a slightly different time frame. An additional interesting decorative idea, if one were so inclined, is that these two jars would make a delightful set of bedside lamps after an appropriate conversion and the addition of painted rawhide, canvas or mica shades. 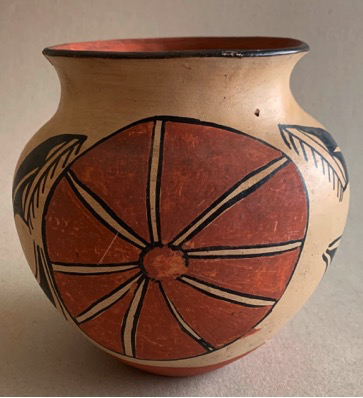 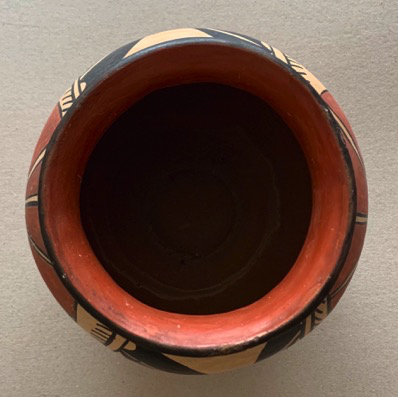 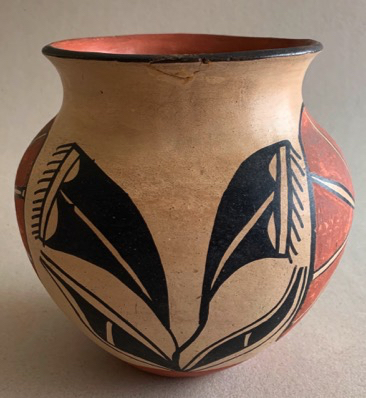 This jar measures 8 1/2” in height and is 8 1/4” in diameter. It features two paired primarily red-painted large floral designs and two paired foliate designs. The flowers are predominantly rendered in red paint with black accents and the foliate designs are done in black. The finely-stone polished characteristic Santo Domingo Pueblo bentonite white slip is clearly in evidence here. This jar’s base is concave, appropriate to this early 20th Century time period.

The jar is in excellent original condition and especially so considering it’s century or so of age. Examination under ultraviolet light shows no evidence of restoration or overpainting with the single small exception of a little (slightly less than 1”) rim chip which has been glued back in though not repaired particularly well. If desired, this chip could be very easily and inexpensively restored by a professional pottery restorer. 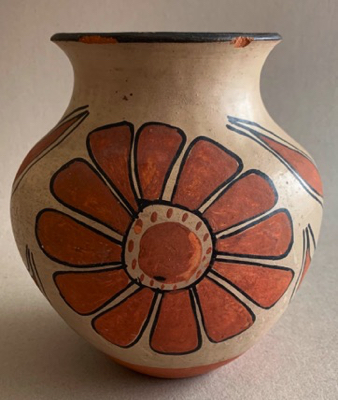 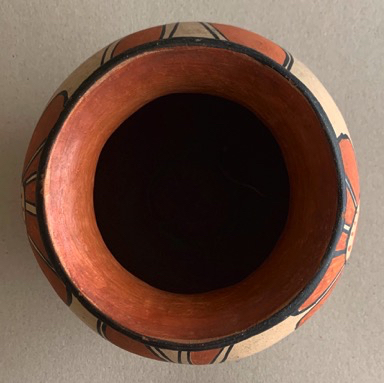 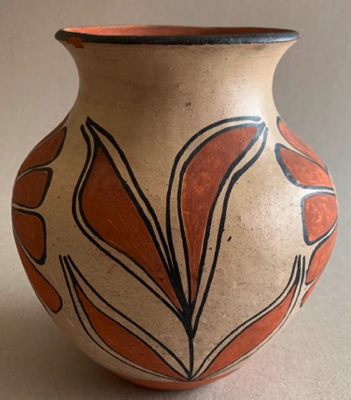 This jar measures 8 3/8” in height and is 7 3/4” in diameter. It features two large paired primarily red floral designs and two paired red foliate leaf designs. The flowers are rendered in red paint with black accents and the foliate designs are done in red paint with black outlines. The finely-stone polished characteristic Santo Domingo Pueblo bentonite white slip is clearly in evidence here. This jar’s base is concave, appropriate to this time period.

The jar is in excellent original condition overall especially considering it’s century or so of age.

Examination under ultraviolet light shows no evidence of restoration or overpainting. There are several small insignificant chips around the rim.

Note: If you are interested in purchasing both jars please inquire

and we will offer a special price for the two.

At left, Pueblo pottery-makers displaying their wares to visitors at The Fred Harvey Company’s Indian Building at The Hotel Alvarado, c. 1906. These two jars could possibly

have been sold there. At right, Julius Seligman’s old Santo Domingo Pueblo trading post, c. 1940’s, another likely location where these jars could have originally been sold. 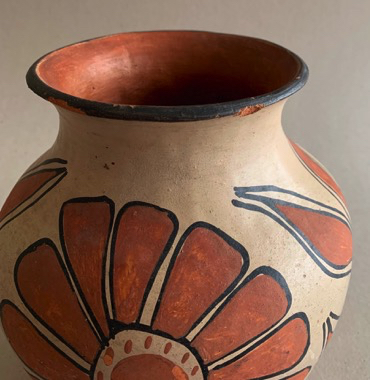 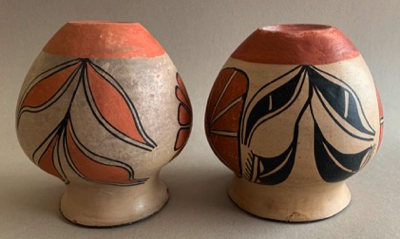 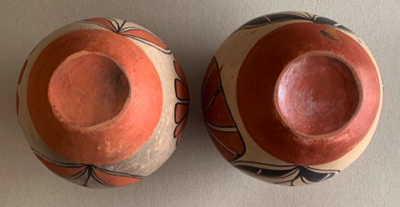 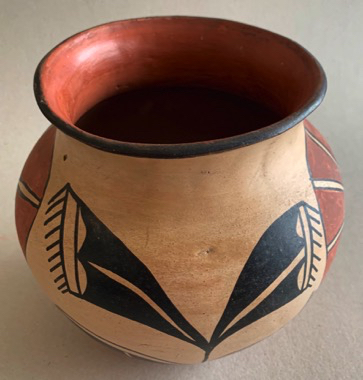 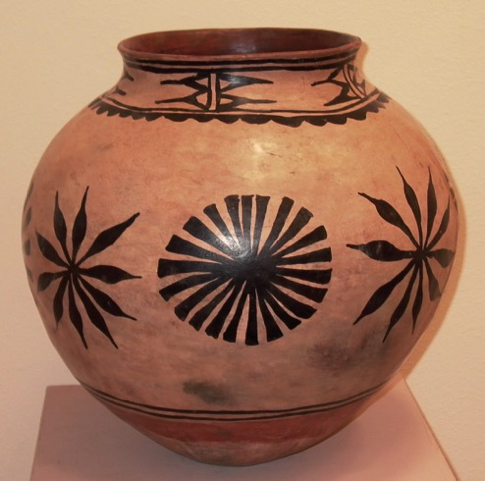 Flower motifs have long been used on Santo Domingo Pueblo pottery. Above