A historic New Mexican round tinwork frame or

“Retablo” with a holy card of the apostle St. Andrew

by The Rio Arriba Tin Workshop, c.1890’s with elements showing the influence of Higinio Valentin Gonzales

ARTISTIC GREATNESS often emerges from the most humble of origins, places and circumstances and none more so than in the case of the historic New Mexico tinworks of 1870-1920. They are a very early example of the modern term “recycling” in that they originally began their lives in a very different form, that of commercially manufactured common tin cans. These tin cans of various sizes, originally containing lard, coffee, vegetables, flour and other substances were originally brought into New Mexico by wagon trains traveling overland to Santa Fe along the Old Santa Fe Trail from St. Louis Missouri, a trail which was first opened in 1821 and which turned 200 years old this year.

The 870-mile-long Santa Fe Trail was established to take advantage of new trade opportunities with the nascent new Republic of Mexico, which had recently won its independence from Spain in 1821 in the Mexican War of Independence.

The trail was used to haul manufactured goods, people and livestock from Missouri to Santa Fe, which was then in the northern Mexican state of Nuevo Mexico. The Old Santa Fe Trail served for the next six decades as the critical primary commercial highway for the flow of goods from the east arriving into New Mexico until the railroad reached the outskirts of Santa Fe in 1880. 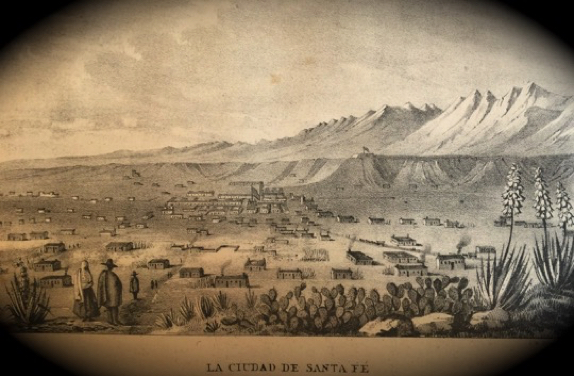 At left and right, traditional 19th Century carved and painted wood New Mexico retablos. At center, historic etching of the city of Santa Fe, the end of  The Old Santa Fe Trail, c. 1848.

At center, a historic New Mexico painted tin retablo by Higinio V. Gonzales, c. 1880-1890. At right, a detail of this retablo showing a similar stamped dot decorative surround as on the retablo at left.

produced in northern New Mexico in the last quarter of the nineteenth century.” 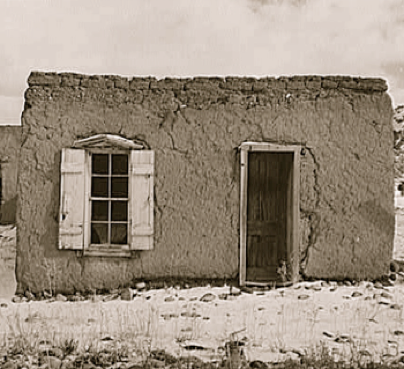 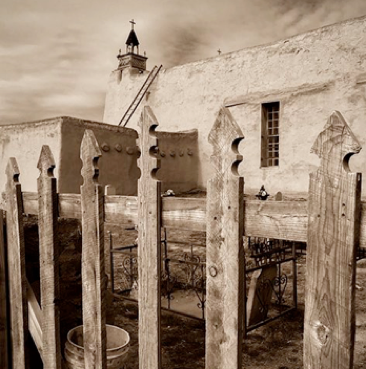 Photo by Jesse Nussbaum, 1911. Photo source and © Palace of the Governor's Photo Archives

The new ready availability of commercial tin metal made for a critical development in the long history of New Mexico devotional artwork. Up until the last half of the 19th century, New Mexican religious retablos had always been typically and traditionally crafted from boards of painstakingly cut and hand-adzed local Ponderosa pine wood which were then carefully carved, gessoed and painted with the images of various saints and other religious tableaus. Now retablos could be made more quickly and inexpensively with the easy and widespread availability of commercial, mostly salvaged materials now at hand; used empty tin cans, discarded panes of window glass and commercially produced printed religious images.

To make such a tinwork “retablo”, a tinsmith or “Hojatalero” would first secure a supply of salvaged scrap tin cans which would then be cut, shaped, fashioned, stamped and soldered into the desired shape, size and form of the tin frame. The tinsmith would then set the frame with the desired paper religious print, paper holy card or cards or fancy colored chromolithograph. These were often obtained directly from local Catholic priests often handed out at the Church itself by the Priest after mass. In addition to tin retablos, other forms of New Mexico tinwork commonly made during this time period were wall sconces, candlesticks, wall nichos, candelabra and processional pieces as well as various small tin attributes, such as crowns made for accenting carved wooden bultos and santos.

As was most likely in the case of this particular retablo, many historic New Mexico tinwork retablos were made to a specific order and purpose for a particular individual, private family or small religious organization such as a Penitente Morada or local village chapel. Historic New Mexico tinwork was made in several ways, by itinerant individual artists going from town to town in their traveling workshop wagons, selling already made items while also taking orders and making pieces on site. More often, tinworks were made by various small commercial tin workshops with several artists working together at various places around New Mexico. This particular tinwork’s characteristics identify it as likely being a product of The Rio Arriba tin workshop. Rio Arriba is a large county in northern New Mexico extending north from Santa Fe to the ancient medieval high mountain villages of the rugged Sangre de Cristo Mountains and onward to the Colorado border. It is hard to imagine or overstate the extreme isolation and remoteness of this area in the 1890’s. 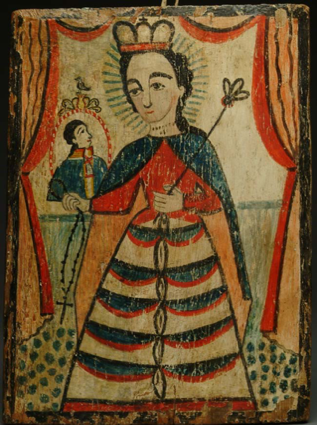 There are numerous certain telltale characteristics of the work itself which help us identify it in this manner:, notably its overall shape, design layout and general appearance and the particular types of stamp worked designs on it. The subject of the retablo, the Apostle St. Andrew or San Andreas is worth a few words, Andreas was the brother of the Apostle, Peter and one of the fisherman on the Sea of Galilee who Jesus recruited to "fish" for souls to join the Christian faith. He is an important figure in the church and thus many families or individuals might have adopted him as their patron saint and might have wanted to have their local tinsmith make a devotional retablo of him for them to worship in their home.

Some elements of the stamp work designs on the retablo, notably the row of stamped dots around the religious print and around the perimeter of the tin itself are reminiscent of some of the work of one of New Mexico’s finest historic tinwork artists, Higinio Valentin Gonzales (1842-1921) and this piece could be an early work by him or one of his followers or apprentices. To view our website listing of another H.V. Gonzales retablo pictured below, please click here. 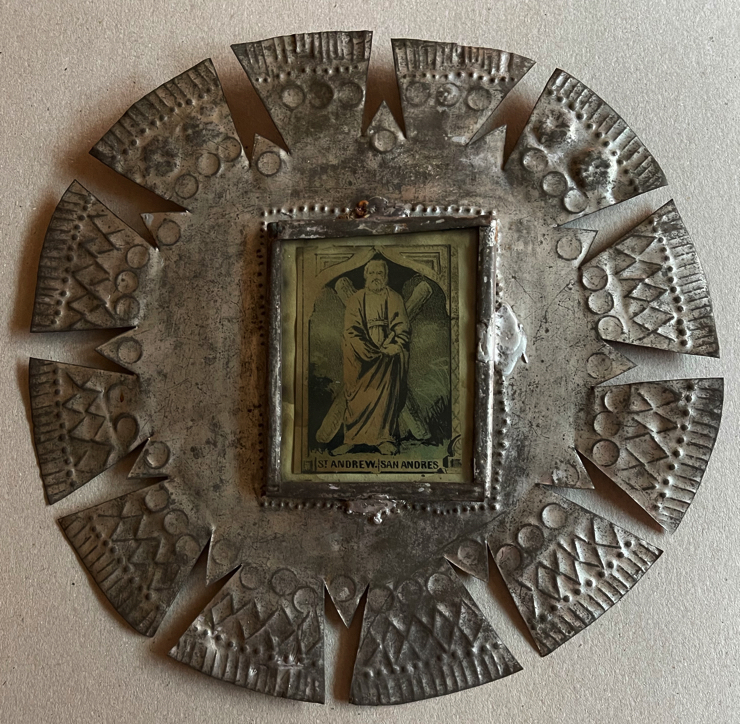 The tinwork measures 9” in height and is 9 3/4” in width. It is in very good original condition which is fairly unusual considering the relative complexity and delicacy of its design, its 130 or so years of age and the remote rugged frontier region in which it was born and spent much of its life. This retablo is a beautiful, rare and refined historic artwork almost miraculously created from the humblest of salvaged scrap materials by an inspired and talented anonymous New Mexico folk artist, a piece which perfectly reflects the time, place, faith and unique geographic and historic circumstances of its creation, but which also projects a completely timeless and lasting universal artistic beauty, humanity and devotional spirit.

It is a physical embodiment of the centuries old place where we live, “Santa Fe” which literally means “Holy Faith.” 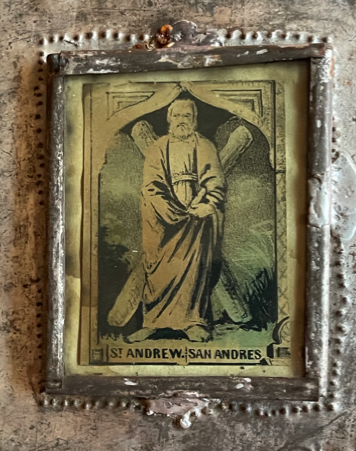 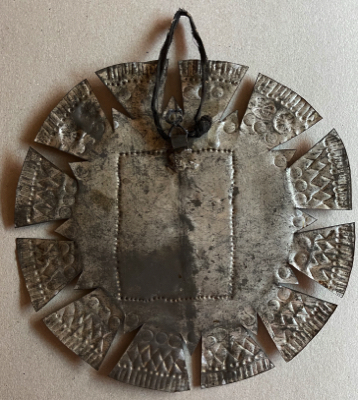 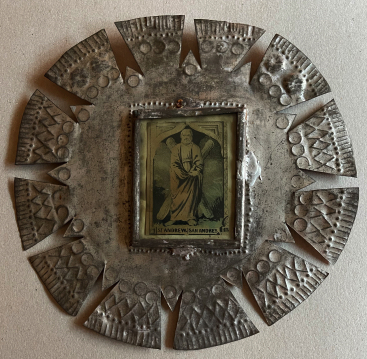 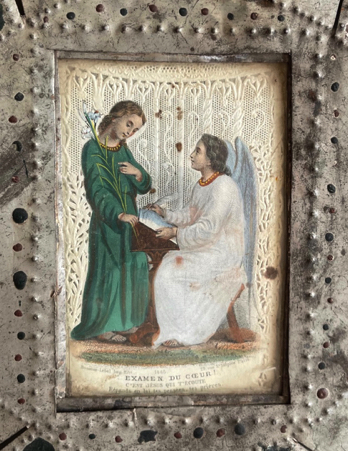 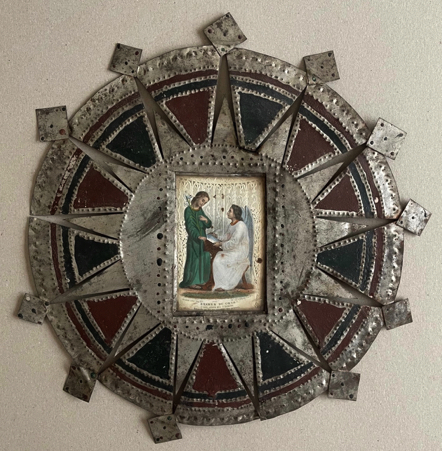 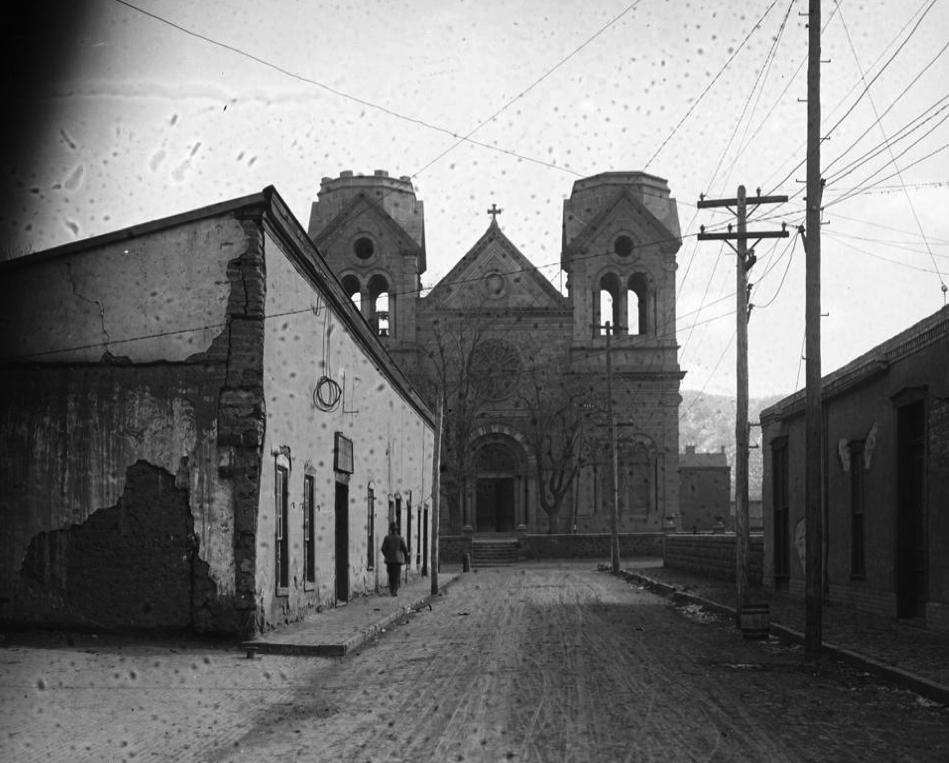